Most mainstream pundits and reporters have assumed that it was speculative buying that caused Silver to go parabolic. After all, its always the dumb money or the public that gets in at the very end. However, in futures markets, parabolic moves are often the result of short squeezes. This is exactly what happened in Silver.

Credit the great work of sentimentrader.com, which is a fantastic service. The chart is below. 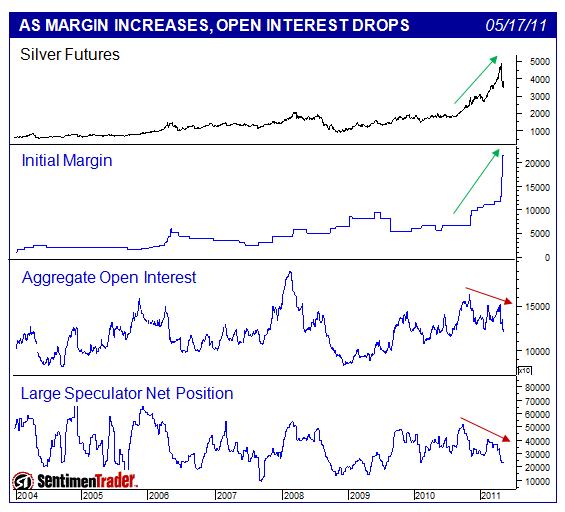 As you can see, both open interest and the speculative long position had been trending down. Both continued to decline during the parabolic move. When open interest falls but price rises, its a short squeeze. The same thing happened with Cotton just a few months earlier. I don’t place much time or emphasis on speculating about market manipulation or intervention but the COT tells us that the commercial traders (which includes JP Morgan) were covering. Typically, the commercials buy into weakness and sell/short into strength.

The low speculative long position is one reason why Silver looks healthy in terms of sentiment. Going forward Silver needs to define and establish support and then build a base before working its way higher. For more insights, analysis and guidance on Silver and Gold, consider a free 14-day trial to our service.

Gold Holds Support, Ready for Breakout in US$ and Euro Terms