Silver prices have consolidated after declining significantly over the past 10 weeks.  After gaining traction in the early part of January, prices moved lower declining more than 15% over a 2.5 month period.  Strength in the US dollar and the perception that the Federal Reserve could be at the end of the quantitative easing cycle has been one of the culprits behind the decline in precious metals.

Silver prices along with gold and palladium have been under significant pressure during the first three months of the New Year.  Investor sentiment on precious metals specifically silver prices turned negative as investors believe that the potential for a quick turnaround on quantitative easing was imminent.

Economic data in the US through February which was released in May reflected a US economy that was gaining strength specifically in the employment and housing sectors.  The housing market saw strong increases in housing starts, building permits and existing home sales.  Both the February and January employment gains were better than expectations and showed strong payroll growth.

The recent consolidation in price action comes as the dollar has lost ground again most major currencies with the exception of the Japanese Yen.  The Yen continues to slide making silver prices in Yen strong.  The dollar has fallen off with the initial releases of March economic data.  The ISM manufacturing report showed a decline calling into question growth associated with Manufacturing.  Even more disturbing was the decline in the ISM services PMI which decline to 53, well below expectations.  The employment sub-component showed that the largest portion of the US economy might have hit a soft patch. 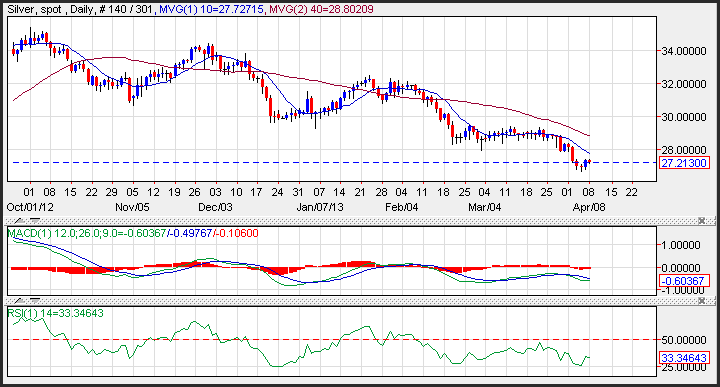 The RSI (relative strength index) is printing near the 33 level, after generating prints below the oversold 30 trigger level last week.  The index is still near the bottom of the neutral range signally a market that has been on the defensive.