When one speaks of gold stocks they should be more specific as the sector is diverse. The term Gold stocks usually refers to the large unhedged producers. Indices such as the HUI or GDX track these stocks and are a proxy for the gold stock universe. However, most companies in the sector are much smaller. We hear the term “juniors” so often and that is what makes it inconsistent. Juniors are typically micro-cap exploration companies. Yet, GDXJ the junior ETF is comprised of companies with market caps in the $500 Million to $1 Billion range. There is nothing junior about that. We notice there is a gap in terms of terminology. If Juniors are sub- $100 Million, and large caps are over $1 Billion, then what do you call those that fit the gap?

We prefer to use the term “established juniors” or small cap. After all, small caps by definition are in market cap between $100 Million and $1 Billion. These terms are most appropriate for those in the middle of said range rather than the bottom or top. We prefer the established juniors as being established (which is open to interpretation) they have less risk than the true juniors and if successful can grow to $1 Billion or more in capitalization.

In our opinion, small caps are the area to focus on as they have a much greater likelihood of growth and leverage to Gold than the large producers. Historically, the large producers do not outperform Gold on a consistent basis. The law of numbers combined with the difficulty of the mining business explains why.

Our junior/small cap index consists of 20 stocks equally weighted with a median market cap of about 600 Million. In the second half of 2010 the market broke to new highs for the first time since 2007. With every breakout comes a retest. Heading into 2011 we predicted the retest would last into the summer. The retest lasted the entire year but appears to be successful. 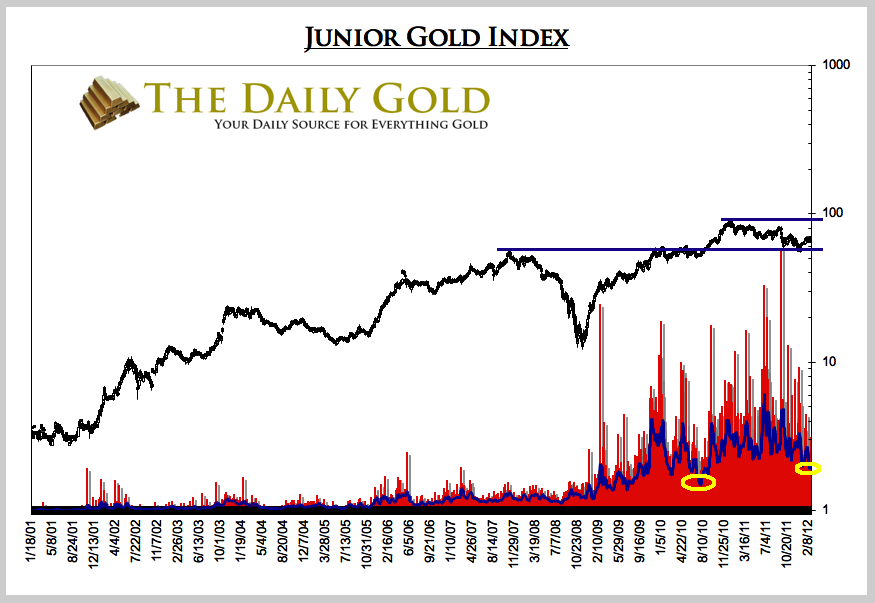 Our bet is that the small caps will work their way back to the high before the end of the summer. It will take the time to overcome resistance but the trend will remain higher. If and when the market makes a new all-time high it will be very bullish for several reasons. It would be the first sustained breakout to a new all-time high since 2005-2006. It would come at a time when the bull market is starting to transition out of the wall of worry phase. Finally, it would generate significant momentum when overhead resistance is basically nil.

This is possible due to a combination of Gold rising and present low valuations improving. In the next chart we graph our index and the ratio of our index to Gold. Gold companies are generating record profits and the price of Gold is near its all-time high yet leveraged small caps are trading near a low relative to Gold. That, in our view is a function of market sentiment and evidence of the wall of worry stage. 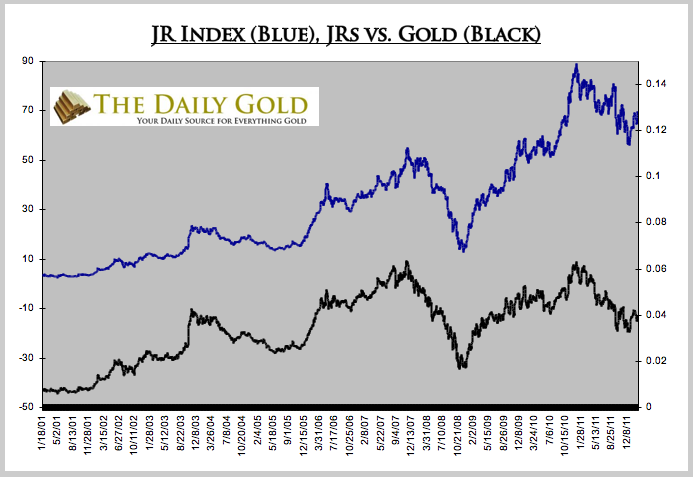 The bottom line is small cap gold stocks have completed a textbook breakout and retest. As we said, the market will likely have a hard slog for the next several months as it encounters supply from the 2011 correction. If and when the market nears its old high it will have built up the necessary strength and momentum to embark on an explosive breakout. Thus, now is the time to be doing your due diligence to find and research those candidates to lead the market in a potential rip roaring move into 2013. If you’d be interested in professional guidance in this endeavour then we invite you to learn more about our service.