Last week in regards to Gold we wrote:

We have the majority of sentiment indicators showing more pessimism than in 2008, an explosion in negative news coverage and news that major banks have downgraded their outlooks. Without knowing anything else, you’d expect Gold to be down considerably, yet it’s only off about 5% year to date and 10% in the past three and a half months. Most important, Gold hasn’t even broken support!

Gold has failed to break below its 2011 and 2012 lows and that is a telling sign, especially in the face of this pervasive bearish sentiment. Gold looks likely to close at a four week high and we expect it to challenge $1600 in the coming days. A close above $1620 would essentially confirm that the bottom is in.

Next we want to turn your attention to the GDX and GDXJ ETFs. Starting with GDX we see the market formed a bullish reversal candle (hammer) last week with huge volume. In fact, the only higher weekly volume occurred at the May 2012 bottom when GDX also formed a bullish hammer. 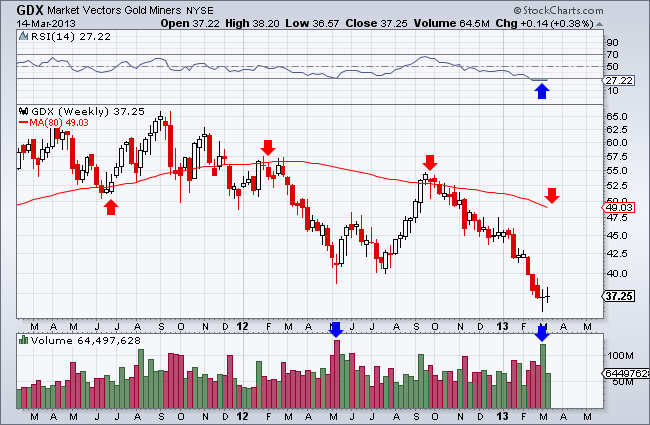 Meanwhile, GDX’s little brother, GDXJ is showing the same reversal candle and with equally as large volume. Look for GDXJ to rally to $21 where a confluence of resistance (moving average, former support) should come into play. 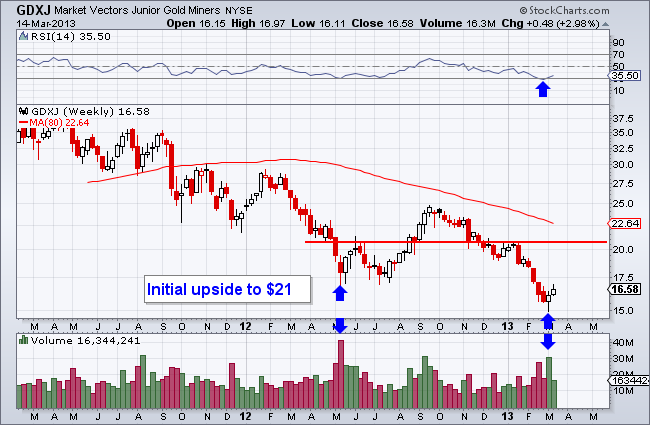 It may take a few more days or another week to confirm but the gold shares are set to rebound and have their best rally since last summer. The market became extremely oversold, sentiment reached an extreme, the market tested strong support (HUI 337) and then put in a bullish hammer reversal and on huge volume. This is how bottoms form. At the least, we expect a very strong (in percentage terms) tradeable rally to go into the spring. We accumulated shares in advance of this bottom and more last week as the HUI rebounded off 337.

As always, readers are reminded that stock selection in this sector is critical to success. Due your own due diligence and you can far outperform the indices. Two criteria we’d use to begin screening companies are stocks that have held their 2012 lows and have strong working capital. If you’d be interested in professional guidance in uncovering the producers and explorers poised for big gains in the next few years then we invite you to learn more about our service.