Contrarian thinking is easy but successful contrarian investing is difficult. Most amateur contrarians neglect that the crowd is right most of the time. It’s only at market turning points where the crowd is wrong and contrarians are right. In recent weeks the voices against precious metals have not only appeared but grown. Weeks ago we debunked a rant of a widely followed mainstream blogger and commentator. He was ranting against the gold stocks and his rant was devoid of any analysis or actionable information. Meanwhile, more mainstream calls to sell gold stocks have popped up and during what likely will be exactly the most inopportune time to sell.

On Yahoo Finance TV, host Jeff Macke and Mike Santoli, a respectable commentator formerly of Barrons tried to analyze the gold stocks on a segment called “The Trade.” While they make a few good points their ignorance is overwhelming. They mention Newmont Mining as the blue-chip stock of the sector. There is no mention of Franco-Nevada which most would consider the blue-chip of the sector and the company that makes the most sense given their discussion of the difficulties of mining. They are telling people to sell the sector after its already declined over 60% and the cyclical bear is long in the tooth. Clearly these gentlemen have not done the historical analysis like we have (the chart below) which shows that this decline is typical during a secular bull market in gold stocks. On a show called “The Trade” these guys couldn’t come up with what is quite obvious from the chart below. 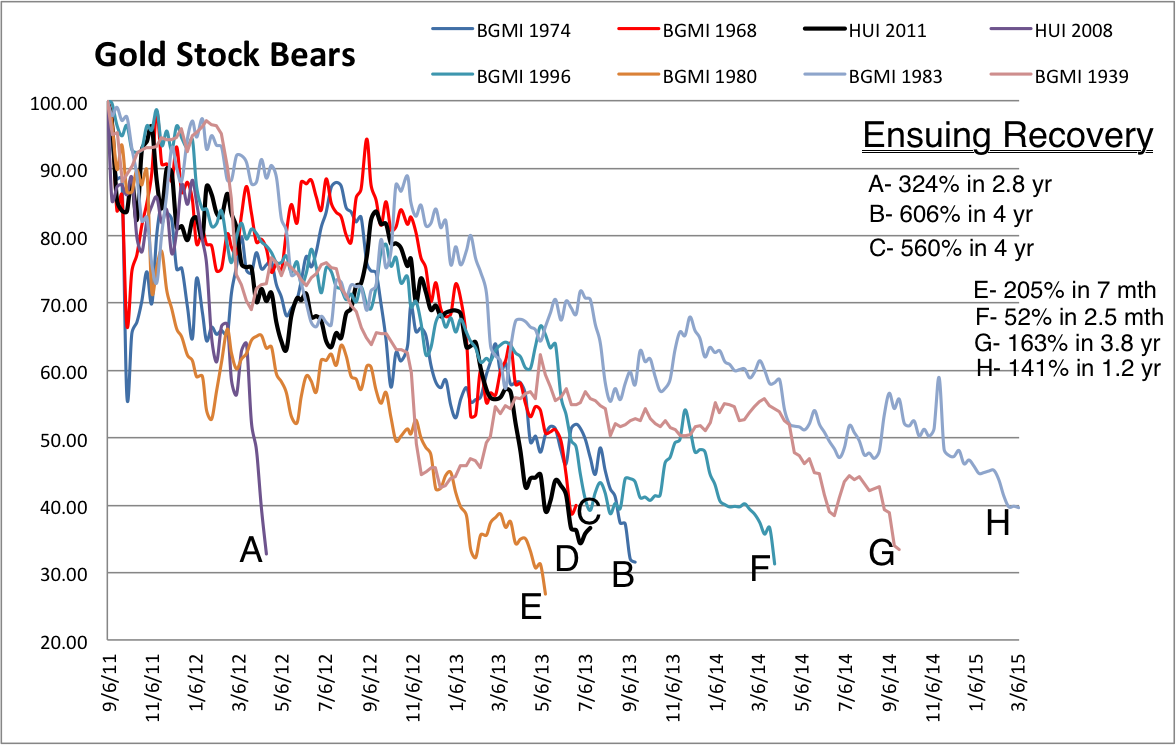 Moving along, an anti-Gold commentator from MarketWatch tried to debunk the bullish supply argument in “Gold is a popping Bubble”:

Another key argument that gold has hit support is the idea that miners are at breakeven on production costs and will not be willing to extract more metal from the ground — thus limiting supply and boosting prices. However, it’s willfully naïve to think that major miners like Barrick Gold or Newmont Mining will simply shut down and bleed cash. They have payrolls to make, operations that require maintenance and — most importantly — debt to service. Consider that Barrick had $14.7 billion in total debt as of its first-quarter earnings report, which isn’t going to pay for itself. Like it or not, these companies will continue to mine simply to keep the lights on, even if it’s not in their long-term interest – which is one of many reasons that gold miners are a bad investment right now.

This is an epic fail. Mine to keep the lights on? At breakeven? Ever heard of turning the lights off? Companies shut down mines because they can’t make money (or enough money) and they can layoff employees as Barrick is doing. Clearly this author spent no time supporting his bizarre assertion with any facts. When the price goes too low, future supply shrinks. This isn’t rocket science. The key word is future. It doesn’t impact the short-term market trend but does so later on.

The root of the problem here is the majority of the mainstream fails to understand not only Gold but the mining industry and the proper way to invest in mining companies.

The mining industry is unlike most industries. It is a venture type industry where performance is skewed and not uniform across the sector. In secular bull markets you can make money buying the mining sector but it does underperform the metals. This is true now and it was from 1960 to 1980. Yet, everyone acts as if today’s underperformance is some revelation. It’s not. It happened in the last secular bull market and will continue in the coming years. Therefore there is little reason to buy and hold the sector. Rick Rule has said if you buy the sector you’ll get killed.

The huge returns and strong outperformance are a result of picking the right companies and buying at the right time. This requires proper due diligence of the industry as well as due diligence on the companies. The mainstream doesn’t have the time for this. These guys are too busy staring at a computer screen, tweeting, hosting shows, and being interviewed to conduct proper due diligence and historical analysis.

Speaking of historical analysis, many are quick to compare Gold’s decline (36% in nearly two years) to 1980 (40% in two months) without even mentioning 1976 (45% in eighteen months) which is the better comparison. Below is an index of Gold and Silver comprised of half of each. The recent decline bottomed at multi-year trendline support and is closely in-line with the 2008 decline. In 1980 this index declined 54% in two months! After two and a half years it was down 75%. 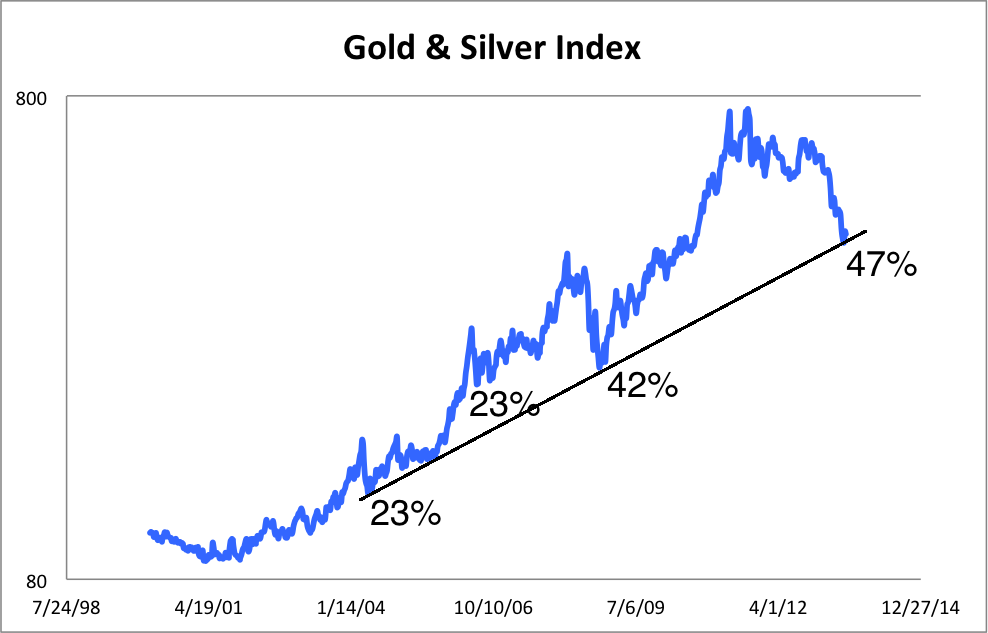 The bottom line here is twofold. First, the growing mainstream negativity toward the gold stocks (after a 65% decline) is a textbook contrarian buy signal. It comes at a time when historical analysis suggests this is the best time to buy and when valuations are at multi-year lows. Second, one should consider the gold stocks a venture capital type of investment. Don’t buy the entire sector but look to buy specific stocks. That is how wealth is attained. While GDX and GDXJ are starting to rebound there are a fair number of stocks which have spent several months bottoming and look ready to lead the the sector in the coming months. If you’d be interested in our analysis on the companies poised to recover now and lead the next bull market, we invite you to learn more about our service.