On October 7th, 2010 my technical indicators were signaling a major reversal about to occur in gold and silver. Seeing that one day outside bar reversal in gold and silver on huge volume right before the jobs report raised huge red flags for my readers and I.  It indicated to me that some of the smart money was hedging their long gold and silver bullion positions for a correction and a possible dollar manipulation from Washington.  I warned to beware of getting caught up in the gold and silver hysteria.
That day was a signal to take profits after the major move as gold and silver are now correcting on fears that the next round of quantitative easing will be significantly less than expected.
On October 13th I wrote, “…many investors are pricing in a major move from the Fed. I’m not so convinced, as equity markets are higher and the dollar has moved significantly lower…I believe the investment community is expecting too much from the Fed and it appears the Fed is doing an excellent job stimulating the markets just through speculation of a move rather than the actual move itself.”
Now we are seeing a huge sentiment change in precious metals as the dollar is being supported by a report published that expects the quantitative easing to be significantly less than expected come the next meeting on November 3rd.
I warned readers at the end of July to purchase gold when it was oversold and to take profits as the precious metal market was getting overheated. Sentiment on gold was way too bullish. Many noted analysts from major Wall St. firms were raising targets right before the gap down in gold. Usually, that signals exhaustion of the trend. A gap then followed by an outside bar reversal was very bearish and increased the probability of a pullback.
Selling pressure has returned to the precious metals market as investors may not have the stimulus that was expected.  Treasuries are also declining even with the major purchases from The Fed.  What will occur when The Fed needs to exit these purchases?  And what if foreign governments refuse to buy our debt?  This could send interest rates soaring which could put a lot of pressure on the housing recovery and the economy.  Yesterday the commerce minister from China and even within The Fed, voting members came out with very strong words about the consequences of a rapid devaluation.
This less than expected quantitative easing may present another buying opportunity for long term precious metals buyers as the manipulation to support the dollar continues.  This is only temporary as sovereign debt issues and a struggling economy continue to plague the world’s economy and central banks will be forced to inflate.  Eventually the Fed will have to pump, but right now, with the markets close to all time highs and the dollar bouncing off lows is not the time.      The financials and housing are showing the foreclosure crisis is not over.  Bank of America(BAC), JP Morgan (JPM) and American Express(AXP) are showing relative strength weakness as the markets are close to new highs.  This signals we may have more defaults and foreclosures.  I do not expect the Fed to act ease as expected until the markets correct and we see more credit issues, bank failures and sovereign debt issues. 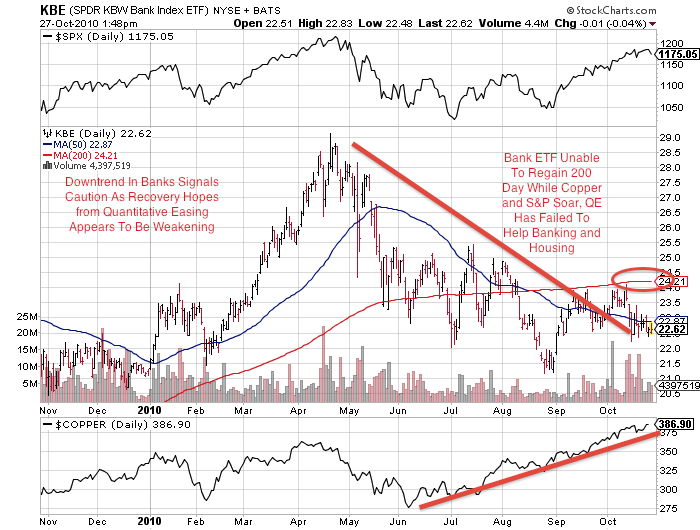 Banks are in a serious down trend unable to regain the 200 day moving average while copper (JJC) and the S&P 500(SPY) are near or above new 52 week highs.  Recovery hopes seem to be weakening evidenced by the banking etf (KBE) unable to hold support or break through the 200 day moving average.  High volume distribution signals we could be in for a major decline in financials and housing.
When we see a major downturn in the market or in the financials, look for another round in quantitative easing to resurface and a buy signal to be generated for gold and silver.
A stronger dollar will put pressure on the equity markets which has been driven largely by sectors that benefit with reflation such as miners and basic commodity producers.  This short term pullback in the gold and silver miners that has been expected with this dollar bounce will produce new buy signals in the next few weeks.

You can follow my next buy signals in gold and silver by subscribing to my free newsletter at http://goldstocktrades.com.

Gold Correction Over, The Tactics