The gold rush mania that drives the price of gold to unbelievable price levels may well come from a global stampede into the world’s oldest currency that leaves the American hoi polloi left holding worthless U.S. monopoly paper and little else.

The best part about the action the in metals is that CNBC/Wall St. Journal/et al have the average American convinced that gold is in a bubble. Ironically, the classic signs of an investment bubble are nowhere to be found – the biggest signal being that gold/silver is only held/being purchased by easily less than 5% of the mass investment community. Contrast this with the internet/tech bubble when large mutual funds were heavily overweighted in the sector, Americans were stampeding like cattle into these funds and every day CNBC was promoting the whole sector. In fact, I recall vividly in 1999 that all Maria Bartiromo had to do was mention the name of an internet stock and it would spike heavily in volumn and rapidly in price. That phenomenon will eventually occur in the mining stock sector, but certainly not any time soon.

Outside of the type of investors who read blogs like my mine, why don’t you go out and ask randomly if any of your friends know the name of more than maybe 1 or 2 junior mining companies.

The real gold rush is occurring in Europe – mostly Germany – and in the eastern hemispere countries. China in that last year changed its laws to allow its citizens to buy silver and has put in programs which encourage the growing middle class to invest in and accumulate gold/silver. India has historically been the largest buyer of gold. Now they are not only continuing aggressively to accumulate gold at these price levels but they are also now voraciously accumulating silver. That is the “poor man’s gold” income and substitution law of economics.

The inflation that the U.S. has been “exporting” to China is now starting to show up in food prices over there.  Clusterstock.com posted this chart this morning: 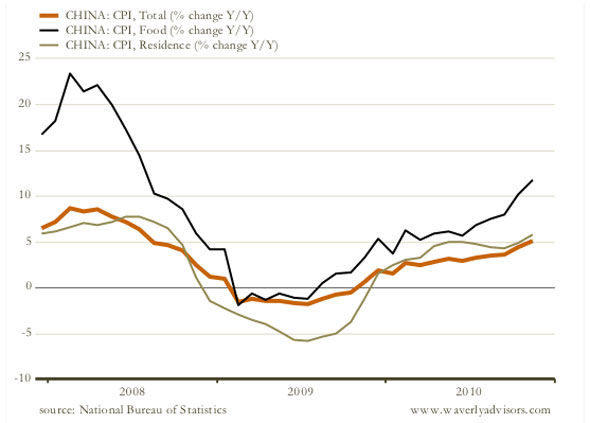 Food inflation is ramping up quickly in China.  Same with India.  This will trigger an even more aggressive push into gold/silver by the Chinese and Indians.  We’re seeing evidence of that every day.  Eventually that food inflation is going to hit the U.S.  I don’t know if anyone noticed, but the Governor of Florida has declared a state of emergency with the orange crop because of the weather:  LINK.  This situation will affect all of Florida’s crop production.  Prices are going higher.  Eventually this reality will sink in and more investors in this country will start to look at gold and silver, only at higher prices.  My view is that silver will continue to outperform gold because of the “poor man’s gold”/income and substitution effect as people here eventually scramble to move into precious metals.

And finally, I believe recent action in the metals is highly related to the situation with the Swiss banks, in which several anectdotes have surfaced about investors having problems getting their Swiss bank to deliver gold and silver that they were safekeeping there.  One particular individual had $40 million in gold bars he wanted and it took him a month plus the threat of legal action before he received his bars.  Another investor with $500k of silver bars is still trying to get his metal delivered and the Swiss bank involved is lobbying hard to convince him to take cash instead.  If these banks were actually keeping the metal on hand like they are paid to do, they should be able to have the bars delivered within a week.

Not in this country of course, but globally precious metals investors are looking at these stories and deciding to get their metal out of the banking system. The knowledge that paper claims on gold/silver outnumber the actual amount of physical gold and silver available to be delivered by insane multiples is finally being widely circulated and those who understand this situation are going to ask for the delivery of their metal.  In other words, in my view, there is a scramble going on internationally for investors to take delivery of gold/silver and this is part of why we are seeing the metals trade inexorably higher.  This could get very interesting…

That Rush Into Gold/Silver You Hear Is Not Coming From The U.S.

Mining Stocks Finally Appear to Have Resumed Their Upward Trend

Has the U.S. Treasury Implosion Begun?