The Gold and Silver business is one that naturally involves consolidation. The industry product is the same and the business is such that mergers and acquisitions are commonplace. As many readers know, the secular bear market of the 1980s and 1990s had an obvious impact on the exploration side of the business. Larger mining companies cut exploration budgets because they had to. Fast forward to today and we know that has impacted supply and the ability of the large companies (who survived the bear market) to grow organically. Hence, mergers, acquisitions and takeovers will only increase. Yet we haven’t seen much of this activity despite a raging bull market in the metals. 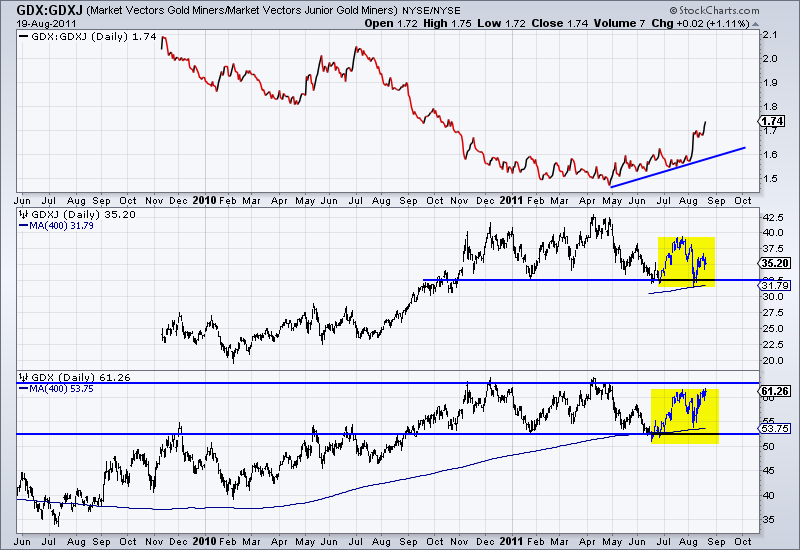 It appears likely that the large caps, which are poised for a major breakout, will outperform over the next few months. This means that in some cases a potential acquirer will see its currency (its stock) rise in relation to a potential acquisition. If company A wants to acquire company B and company A’s stock rises by 20% and company’s B stock rises by 5%, then the acquisition becomes cheaper and less dilutive.

The last time the larger companies outperformed was in late 2008 and early 2009. That wasn’t exactly a time you’d expect such companies to be making aggressive acquisitions. Today, Gold is raging and the market will soon demand growth from the large companies. Finally, unlike in 2009-2010 the larger stocks are performing better in nominal terms and better in real terms. The latter is crucial as it enables them to acquire assets at a better cost.

So how do investors play this development? In our premium service, we’ve focused on larger companies that have immediate growth potential are trending higher. Ultimately performance will filter down to the smaller companies and it will be time to add some risk to your portfolio. Additionally, one should focus on the smaller companies that have growth potential or are likely to be acquired. If you’d be interested in professional guidance then we invite you to consider our premium service.