We now have some follow through to Thursday’s swing low and unlike the last two times, this one is not taking the shape of a bear flag. As I explained last week in the nightly reports, and this week on the blog in “Hoping for a Break” , I was looking for smart money to run the May pivot followed by a quick reversal as my final buy signal. 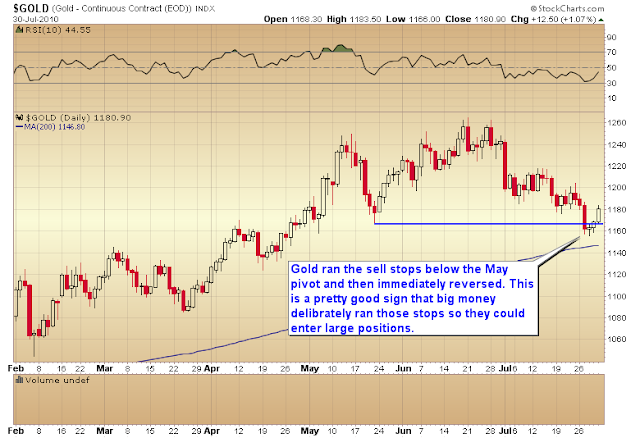 The failure to follow through to the downside is a sign that someone was in the market buying all that the technical and emotional retail traders were selling.
Now we need two more things to happen before we can be reasonably sure the intermediate cycle has indeed bottomed. First, we need to complete a weekly swing low. That will happen this week if gold can hold above $1155.90 and move above $1194.50. 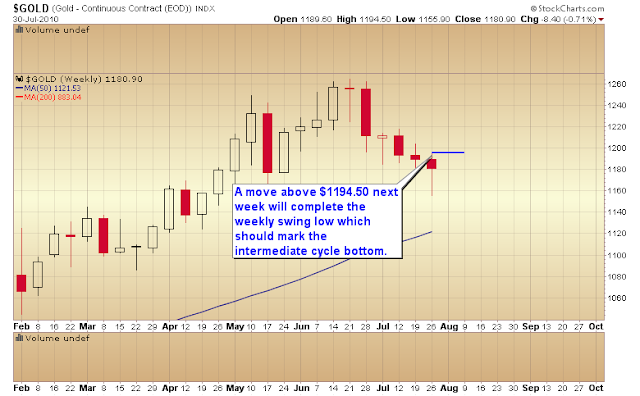 We also need to break the pattern of lower lows and lower highs. Gold will do that if it can trade above $1204 next week. 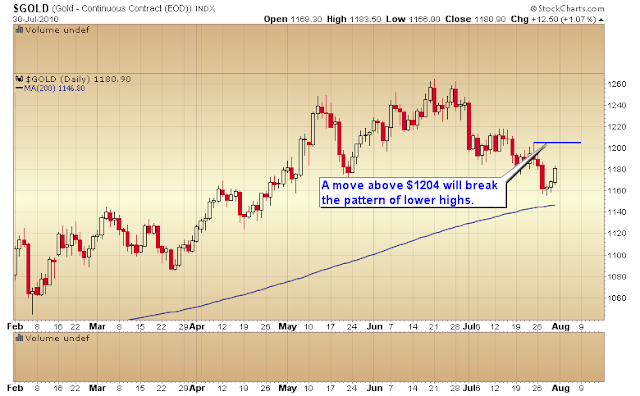 I know that 6 weeks of negative returns are frustrating but the reality is that this has been one of the mildest intermediate pullbacks of the entire bull market. Gold dropped a mere 8.6% and miners only 14%. That’s almost unheard of for this volatile sector.

Several weeks ago I showed subscribers this chart of the public opinion poll for gold. 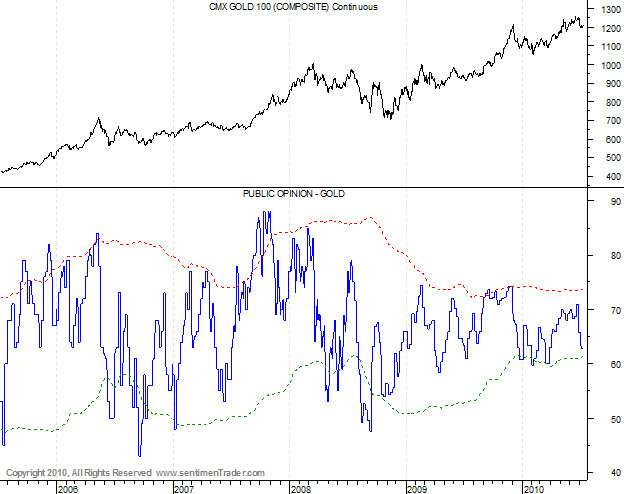 Chart courtesy of http://www.sentimentrader.com/
During this intermediate leg up, sentiment never really got extremely bullish on gold. On top of that, neither gold nor miners got very stretched above the 200 day moving average. I said at the time that was a recipe for a very mild correction and that is exactly what has unfolded.
I think there is a very good chance gold put in the intermediate low this past Wednesday and we are now headed higher into the strong demand fall season. (Gold sentiment has since dropped below the level we saw at the February intermediate low. A definite sign we are nearing or at a bottom.)
From time to time I will see posts on the blog or on the internet questioning the wisdom of investing in miners as they have underperformed gold. To begin with, miners have not underperformed gold, not by a long shot. What happens is people take a short little piece of history where the miners have underperformed for one reason or another, and wrongly assume this period of underperformance is representative of the sector during the entire bull.
Since the bull started, miners, as represented by the HUI index, have increased over 1100% whereas gold has gone up 400%. The reality is that miners got quite a bit ahead of themselves during the first 10 years of this bull market. 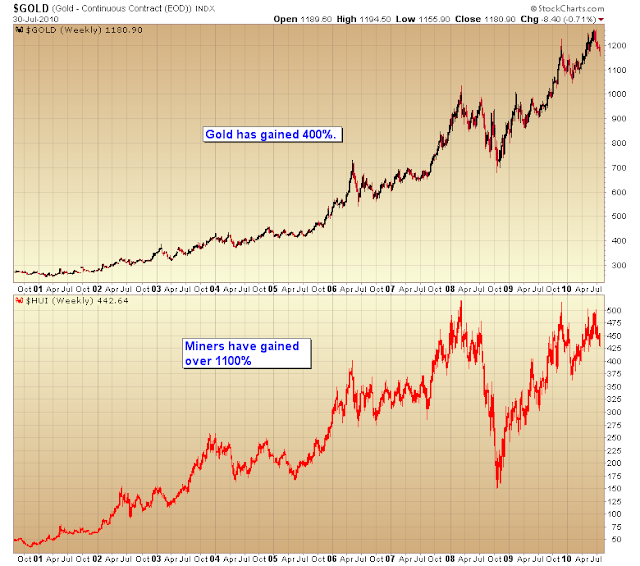 There is a reason why miners lagged a bit during the last C-wave and that had to do with skyrocketing oil prices that were compressing profit margins. There is a reason why miners are struggling now too. Let me explain.
First off, don’t forget we had a huge move off the November `08 bottom. That was a 250+% gain in one year. From time to time you might see a single stock do that but for an entire index to make that kind of move in a year is almost unheard of. 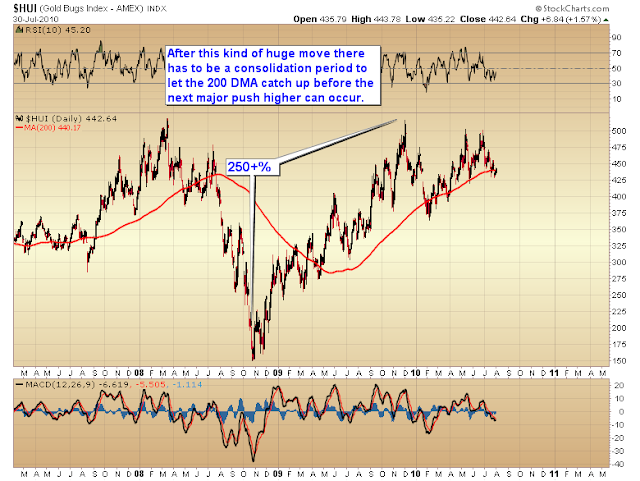 A move of that magnitude has to go through a consolidation period at some point. That is exactly what miners have been doing this year; they are consolidating that monster rally.
Miners have now made four attempts to break through resistance in the 500 area. In the process they have formed a giant consolidation stretching all the way back to March of `08. As many of you may have noticed the larger these consolidations are the bigger the rally tends to be when the breakout finally comes (I’ll show you a really big consolidation at the end of today’s report).
Another thing that has been holding miners back is the law of regression to the mean. All financial assets obey this law. Gold and miners are no exception. When anything, whether it is gold, miners, oil, or housing prices, stretch too far above the average, eventually the law of regression to the mean pulls it back down. In the next chart you can see this in action. 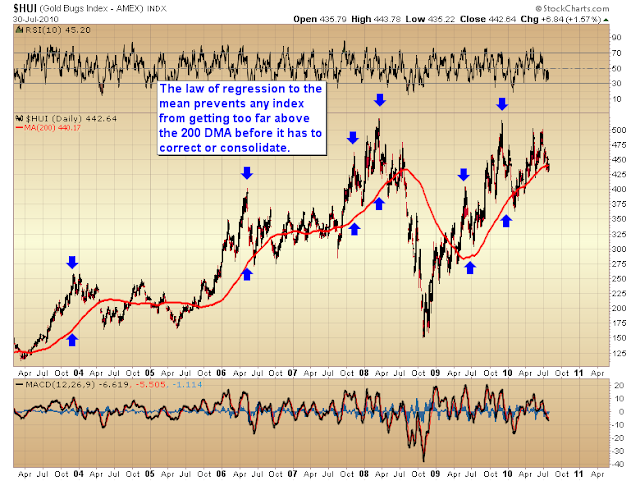 In volatile sectors the moves up can get pretty stretched, as you can see. I’ve found that about the most any sector can stretch is 50-60% above the 200 DMA before gravity pulls it back down. And like a rubber band, the further one stretches above the norm the harder it tends to snap back. In the mining sector that almost always means a move back to, or even below, the 200 day moving average.
What we really need to take away from the above chart is that the 200 DMA has now had time to “catch up”. Miners are setup for the next big move higher and they can now do it without the law of regression to the mean acting to drag them back down.
Incidentally, when we see the rubber band has gotten extremely stretched, that is the time we want to sell. Unfortunately most traders and investors do the exact opposite. They buy high and sell low because they are being controlled by their emotions. During these intermediate corrections the calls to sell by analysts and bloggers will get intense, but that simply isn’t how one makes money in this business. You buy when it’s hardest to buy and you sell when it’s hardest to sell. Professionals understand that in order to make money you buy into dips in bull markets. And about every 5-7 months we will get one of these dips in gold. They happen like clockwork.
For the last couple of weeks I have been trying every way I can think of to make investors understand this, so they can take advantage of this opportunity and so they don’t make the mistake of selling during a normal corrective period. Many have taken advantage of the “opportunity” and hopefully many more will before it’s too late. And judging by the number of “Old Turkey” investors on the blog, a big percentage of subscribers have now switched from trying to trade the bull to just riding him.
Invariably, what happens though is that most people simply can’t buy into the correction. They have to wait till it “feels” good before they can buy. Unfortunately by that time a big part of the rally is over.
Warren Buffett said it perfectly. “We simply attempt to be fearful when others are greedy and to be greedy only when others are fearful.”
Folks we are now at that point where it’s time to be greedy.
I’ve mentioned many times in the past that I’m not a big believer in patterns. Too often they end up morphing into something else or just outright fail like the head and shoulders top did recently on the S & P. There are however a few patterns that I do pay attention to and they include triangles, which are often consolidation/continuation patterns, crawling patterns (also continuation patterns) and T1 patterns, again a continuation pattern.
We saw a great example of a triangle pattern last year right before gold broke out above the `08 highs. 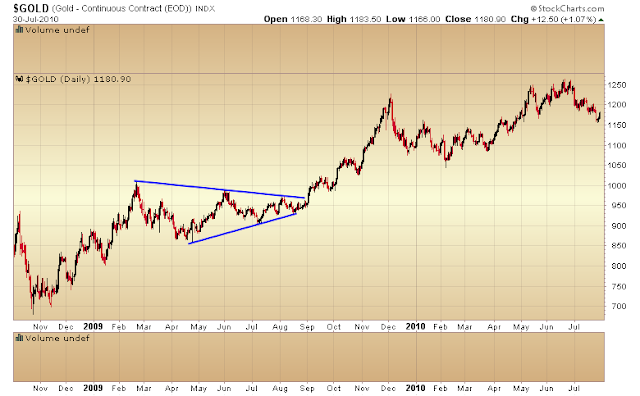 We saw a text book crawl pattern recently in the dollar. 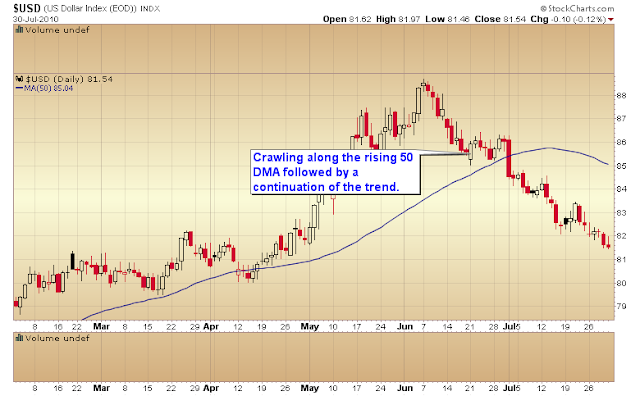 And we’ve seen multiple T1 patterns form as gold has progressed through its bull market. 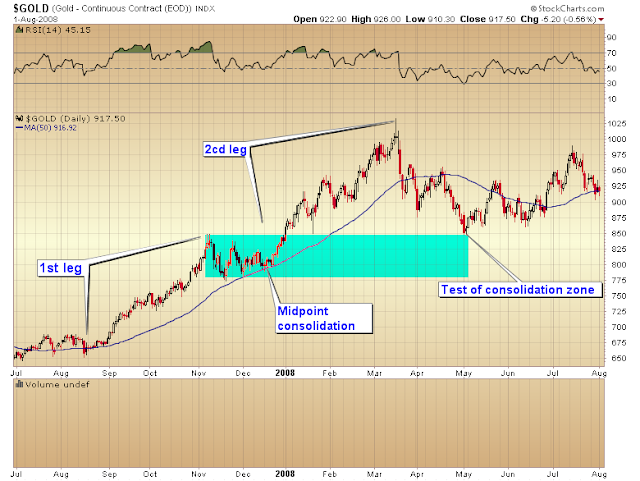 I think we are probably seeing one form right now, although not in gold. This T1 pattern is forming as the miners are consolidating that huge move out of the `08 bottom. 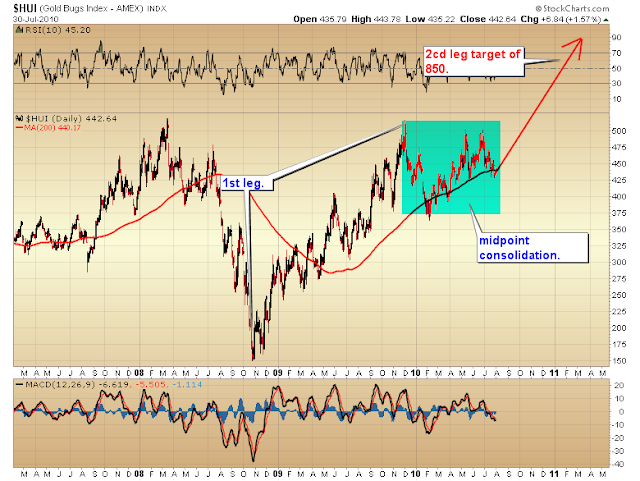 The first leg up tacked on 350 points. Second legs in T1 patterns usually gain almost as much as the first leg. That puts the HUI at roughly 850 by the time this T1 pattern reaches its top. That is a huge move up from where the HUI was on Friday (425) and another reason why I think this C-wave is going to run into the spring with another corrective sideways move late this fall (gold’s next intermediate cycle low). 425 points is way too big of a move to unfold in only 3-4 months. The law of regression to the mean would pull it back down before it ever had a chance to raise that far. No, I think it’s probably almost a given that this next phase of the C-wave is going to unfold in two stages and correspond to the dollar moving down into its 3 year cycle low. 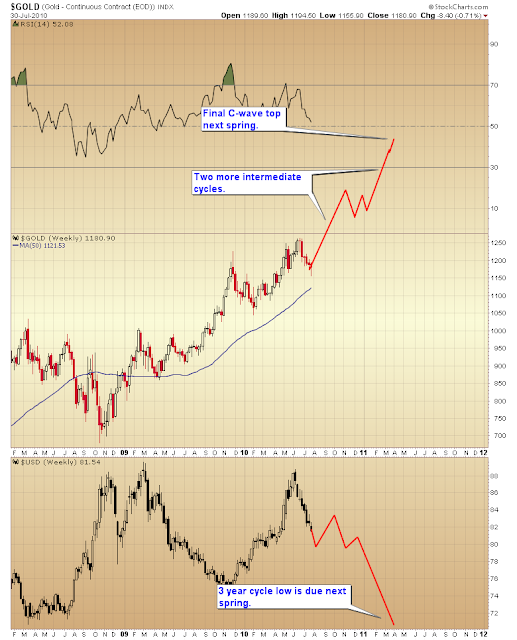 Then as gold moves into its D-wave decline, which will mirror the dollar’s bounce out of the 3 year cycle low, we should see the HUI complete the T1 pattern with a test of the consolidation zone, which incidentally will tell us when to get long again for the next A-wave advance. 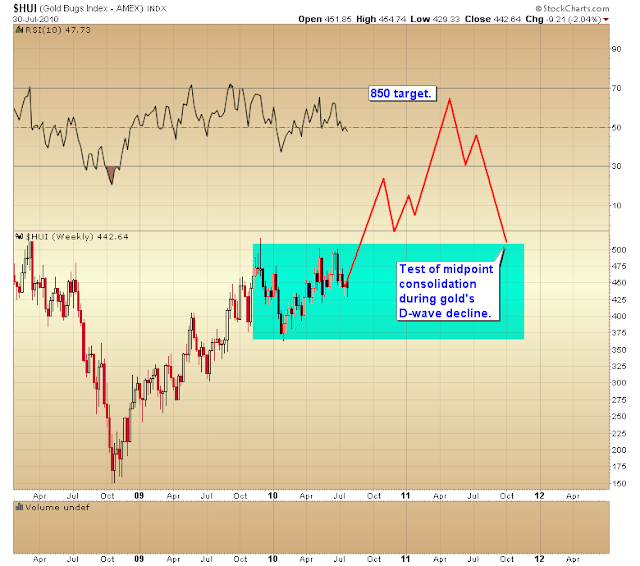 Oh and before I forget, how’s this for a really big consolidation pattern? 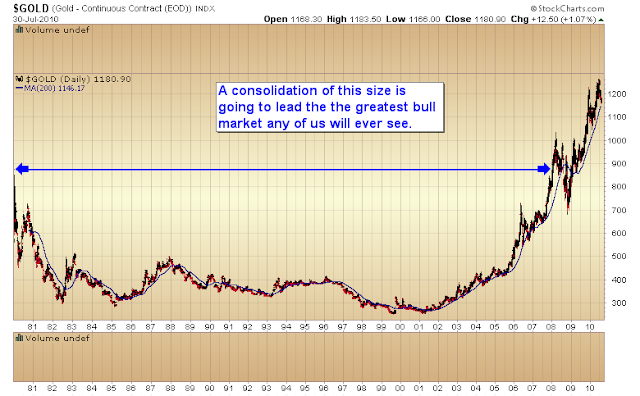 For a limited time I am offering a discounted yearly subscription, 25% off the regular rate. Click here if you are interested in giving this offer your consideration.

Gold Scents is a financial blog focused on the analysis of the stock market and the secular gold bull market. Subscriptions to the premium service include a daily and weekend market update emailed to subscribers.

Reading Between The Lines: James Bullard’s Seven Faces of “The Peril”

Breaking Down The Charts: Gold and Silver