Analysts and pundits provide various reasons for the bull market in Gold. This includes emerging market demand, low interest rates, money printing, central bank accumulation, central bank policies and falling gold production. These are all good reason but there is one reason which stands apart and will drive precious metals to amazing heights. It is the impending sovereign debt default of the west, led by the great USA.

Government finances have reached a point where default and/or bankruptcy is unavoidable. After all, we’ve already started to monetize the debt. The inflection point is when total debt reaches a point where the interest on the debt accumulates in an exponential fashion, engulfing the government’s budget. When this occurs at a time when the economy is already weak and running deficits, there essentially is no way out.

Significant runaway inflation and currency depreciation result from a government that essentially can no longer fund itself. It starts when the market sees the problem and moves rates higher. The government then has to monetize its debts to prevent interest rates from rising. Let me explain where we are and why severe inflation is unavoidable and likely coming in the next two to three years.

As far as what level of interest expense is the threshold for pain, Russ Winter writes:

Once interest payments take 30% of tax revenues, a country has an out of control debt trap issue. When you think clearly about it, this just makes sense, as the ability to dodge, weave and defer is pretty much removed, as is the logic that it will be repaid in a low-risk manner. The world is going to be a different place when the US is perceived to be in a debt trap.

Is there anyway out of this? Either the economy needs to start growing very fast or interest rates need to stay below 3% until the economy can recover. Clearly, neither is likely. As you can tell from the calculations, interest rates are now the most important variable. If rates stay above 4% or 4.5% for an extended period of time, then there is no turning back.

Judging from the chart below, the secular decline in interest rates is likely over. It is hard to argue with a double bottom, one of the most reliable reversal patterns. 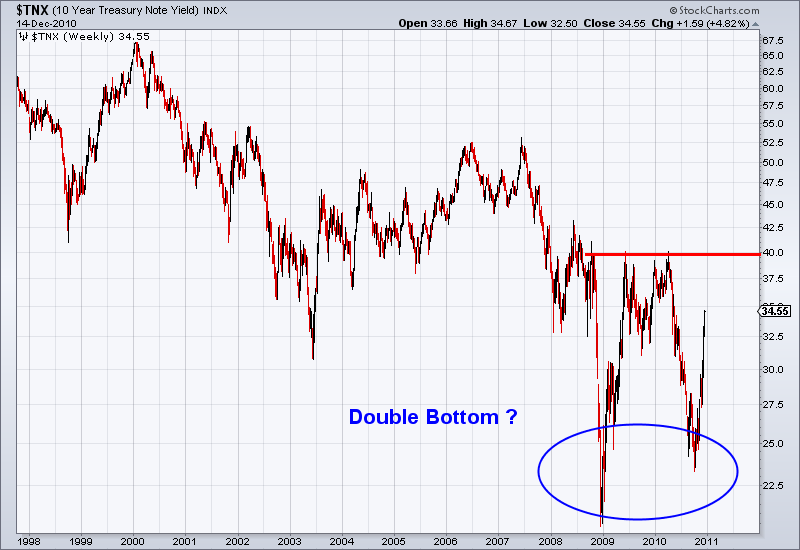 As you can see, there is really no way out of this mess, which also includes the states, Europe and Japan. This is why Gold and Silver are acting stronger than at any other point in this bull market. They’ve performed great when rates were low but are likely to perform even better when rates start to rise. This is why we implore you to at least consider Gold and Silver. We’ve created a service that offers professional guidance so that traders and investors can protect themselves and profit from this amazing bull market. Consider a free 14-day trial to our service.

Gold or Stocks: What to Hold During the Great Correction

Mining Stocks Finally Appear to Have Resumed Their Upward Trend