It’s no secret that mergers and acquisitions (M&A) activity in the mining sector is in the dumps.  According to PWC, deal volume in the first half of 2013 declined 31% as compared to the same period last year. Deal value declined 74%. Excluding Glencore’s $54 billion acquisition of Xstrata in 2012, deal value is still down 21%. A recent Bloomberg article noted that the volume of acquisitions valued at less than $1 billion is at an eight-year low while the volume of deals in Q3 was the lowest since Q4 of 2004. However, some deals are taking place and in order for speculators and investors to capitalize, they will need to keep a discerning eye, just like potential suitors.

The cause of the current malaise in M&A activity is fairly simple and two fold. First, the major companies who drive M&A activity made some bad decisions and costly acquisitions in previous years. Second, the deep and extended cyclical bear market has essentially forced the majors, in terms of acquisitions, to the sidelines. The majors are looking to get leaner and meaner and until that and a recovery in the market occur, they will remain on the sidelines.

Despite difficult conditions, some companies have remained active.

Days ago B2Gold (BTG, BTO.to) announced the friendly acquisition of Volta Resources (VTR.v) for $63 million. This will be B2’s second acquisition in the last 12 months. In the first quarter of this year the company closed its acquisition of CGA Mining, which cost the company $1.1B.

Alamos Gold (AGI, AGI.to), like B2Gold has been quite active. Alamos recently closed its acquisition of Esperanza Resources for $69.4 million which was announced in the summer. Alamos also closed a smaller acquisition of Orsa Ventures for $3.5 million.

These recent deals highlight one observation I’ve heard from several exploration companies. At present, its the mid-tier type companies that will lead the M&A charge. These are companies that are generating healthy cash flow and earnings at these prices and have the working capital to push forward. Their share prices are not in the toilet like those of the majors and many juniors. Meanwhile, majors will be on the sideline at least until industry sentiment improves. That is what one exploration company told me.

So when will sentiment improve?

GDX and GDXJ continue to be trapped in a long bottoming process. This process began in the spring and is in its seventh month. While a bottom in terms of price is likely in, both GDX and GDXJ can stay trapped in this process for several more months and perhaps longer. My view is sentiment will not improve until after GDX and GDXJ breakout above the red lines. 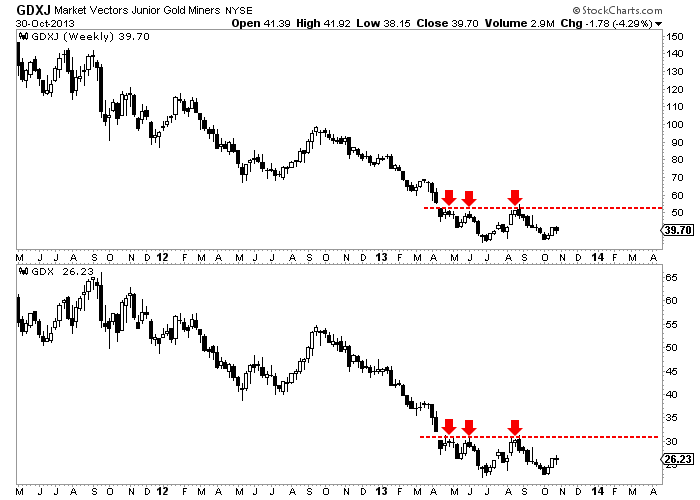 M&A activity will remain quite low well into 2014 for several reasons. The majors for the most part are in no position to take on more risk. Even if we get a rip-roaring recovery in 2014, the majors will need more time to get themselves in a better position to make acquisitions. In addition, a handful of mid-tiers have already been fairly active. Thus, don’t expect a huge increase in acquisitions for at least several quarters.

Nevertheless, more than a handful of exploration and development companies appear to have bottomed and are showing relative strength against the sector. These are companies that have value and potential even amid a struggling market.

To find such companies, start your research by looking for junior companies which are strong enough to stand their own. Look for companies with cash, experienced management teams and projects in favorable jurisdictions. In addition, ownership of the stock by a major or larger company is the type of sponsorship we love to see. Then you have to do due diligence on the projects which is obviously more difficult. Acquirers are essentially looking for projects that are not too costly to start-up and will have good margins at current prices. If you’d be interested in our analysis on the junior companies poised to lead this recovery, we invite you to learn more about our service.