There are two drivers of stock prices: valuation and earnings. Valuations are very much driven by investor sentiment while earnings are driven by revenue and margins. In recent months we’ve devoted some time to the three phases of a bull market. These are the stealth phase, wall of worry phase and participation or bubble phase. Earnings rise in each stage while valuations only increase in the first and last phase. The average gold producer has made no net progress in five or six years because the average valuation has declined considerably. Going forward, this means opportunity.

At the end of the wall of worry phase, valuations are low and only the true believers remain. Fewer hands are in control of the bull market and company valuations have room to expand. A sustained breakout to the next new high is the catalyst that shifts the bull market out of the wall of worry phase. Recall our last piece and one can see this has happened in every equity bull market. Rising profits sustain the breakout which attracts greater and greater participation which causes increasing valuations.

In analyzing the potential of gold stocks we will use cash flow. Thanks to Tocqueville Gold’s quarterly investor letter, we post this chart of price to cash flow valuations: 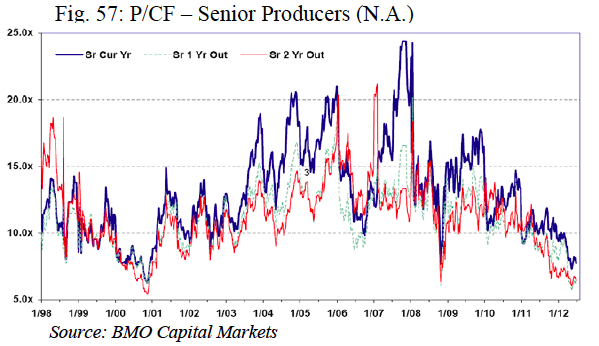 Valuations are currently at levels commensurate with those of late 2008 and late 2000. By the way, those were the two best times to buy in the last 12 years. Also, we want you to notice how valuations increased substantially (about 100%) from those levels within six months.

Lets think of cash flow in terms of the Gold price. We looked at first quarter financials for several of the better performing companies in the HUI. We calculated cash flow as a per ounce figure. In the first quarter, the average price of Gold was roughly $1700. The five companies we looked at had cash flows that range from $665/oz to $800/oz. To simplify, we will use $750/oz as a cash flow margin.

Obviously, cash flow is affected by the direction of the Gold price. In recent weeks we’ve been bearish as the price action called for a breakdown in the metals. However, both Gold and Silver have failed to breakdown and this lends credence to the potential for the metals to establish bottoms via a gradual base building process. 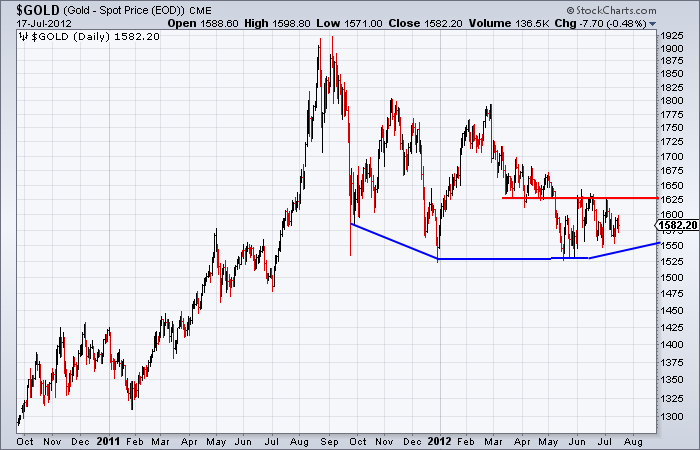 If Gold is able to break above $1625 and confirm its bottom then it would be on an eventual track for a rebound back to $1900. If a cup and handle type of pattern develops, it would project to $2250/oz. In the past we’ve noted $2,300 as a strong Fibonacci target.

The most important point in this equation is the production growth. Estimating for the entire HUI is very difficult as these companies can be all over the map. For simplicity, let’s say the sector grows production 15% in 2013 and 2014. We’ll get back to this later.

It is important to understand we are not forecasting this exact event as there are too many shifting variables and no one can predict the future. The point here is that the market is setup in a way that this is feasible. Valuations are low and there is room for substantial expansion there. Secondly, money has moved out of this sector so there is room for it to move a lot higher should money flows return. Third, Gold is in a secular bull market and higher prices are ultimately ahead of us, which for the most part, equates to higher margins and profits for the producers.

Moreover, as we’ve discussed before, these are the conditions that allow for spectacular performance in the last phase of a bull market. We are just focusing on the next two years but imagine how high valuations could go if the miners are able to grow earnings for the next five years? There is plenty of room for valuations to expand over the next five years.

The most important of these drivers is production growth. Naturally, margins will expand because of the bull market and valuations will rebound significantly from the trough. The leverage to expanding margins (because of the higher Gold price) and increasing valuations is dictated by production growth. Thus, the best performers will be those who can grow production the fastest. Yes, we are master of the obvious here but this is paramount and why we focus on the producers best positioned for and most likely to take advantage of the inevitable next leg up in this bull market in precious metals. If you’d be interested in professional guidance in this endeavor, then we invite you to learn more about our service.