The selling pressure has stopped. It seems that the S&P 500, Crude Oil and Gold are now recovering somewhat. Sentiment reached extreme negative levels on all of these asset classes over the last couple of weeks. 30 Yr Long Bond has paused its vertical rise on top of extreme bullish sentiment, while the US Dollar posted a reversal also due to extremely bullish sentiment. It seems we are entering a period of mean reversion but the bottom line still remains the same: investors have been selling risk due to possibility of a disorderly default in Eurozone, triggered by Greece as the first domino. At the same time, Asia and especially China is slowing down meaningfully. Nothing has been done, announced or hinted by authorities yet and risk off trades are very crowded.
Economic Data 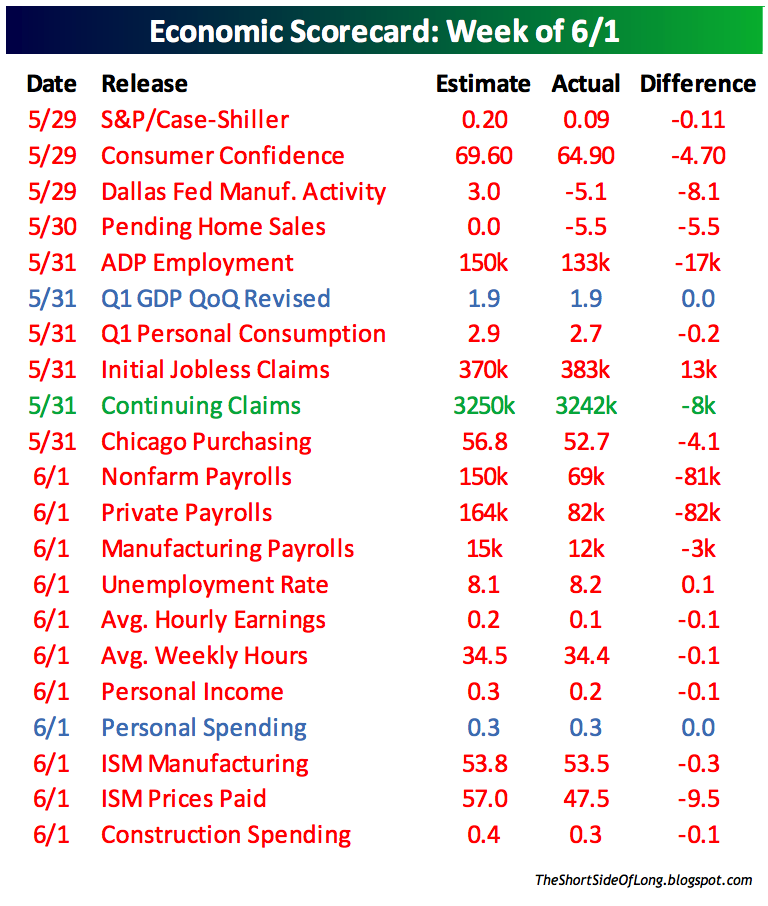 Last week was one of the worst ever data release weeks for the US economy. Out of 21 releases throughout the week only 1 was better than expected, 2 came in at their estimates and a staggering 18 releases (including the important employment figures) all came in below economist expectations. I am pretty sure that the authorises, politicians and central bankers around the world are watching this with a magnifying lens right now. The question is what will they do next and will it even matter? 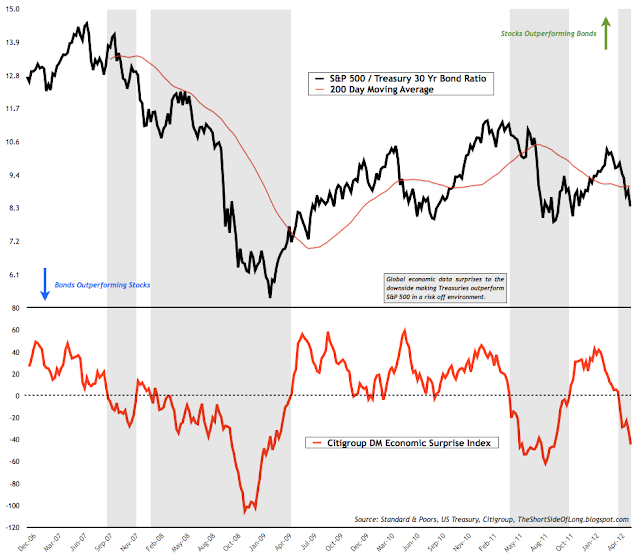 The overall Developed Markets Citigroup Economic Surprise Index has completely collapsed in recent weeks, so it should not be surprising at all that Bonds have outperformed Stocks again in the first half of 2012. While majority of analysts, economists and investors continue to put all of their faith towards the Federal Reserves ability to re-stimulate the economy through further QE, contrary to that I personally think it will not have too much of an effect, apart from a short to medium term sugar high rally without any new highs. In other words – a bear market rally! 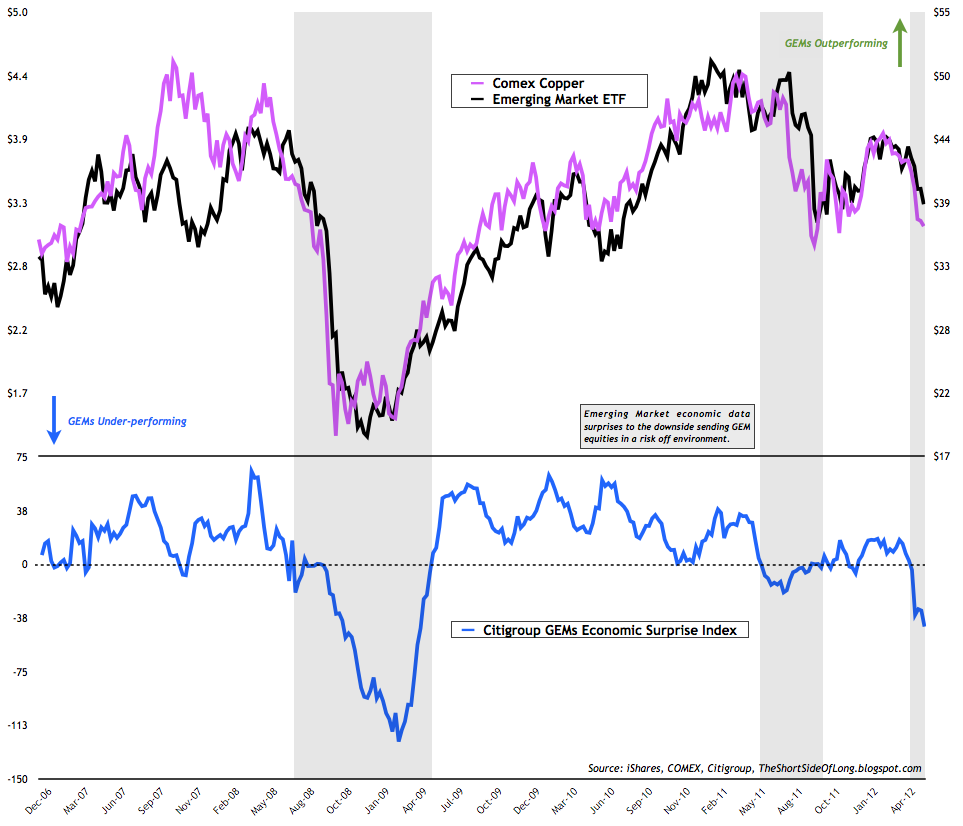 Economic data is negatively surprising economists, not just in the US, but all over the world including the darling favourite of the investment world – Emerging Markets. As we can see in the chart above, the Emerging Market Citigroup Economic Surprise Index has completely collapsed for the first time since 2008 and with it GEM equities plus the global economic barometer – Dr Copper. This leads me to believe that not all is well in Asia and especially China. 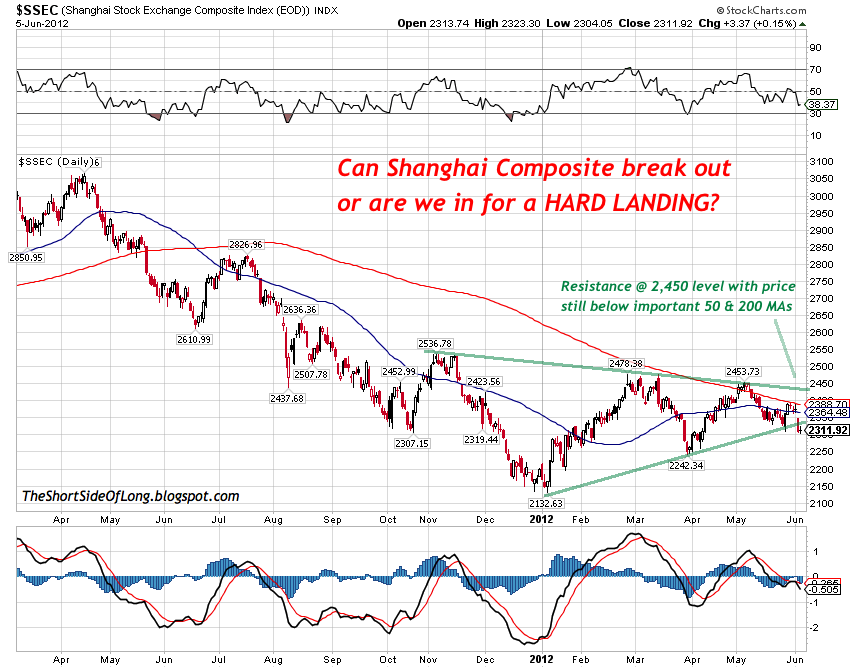 While I believe all risk assets are currently oversold and due for a rebound, if the weakness continues again in repaid fashion, it will most likely lead me to a conclusion that we are entering a global recession. Chinese equity market, the Shanghai Composite, is still struggling to break upward. While this is a very bad sign, I am still willing to give it a bit more time to prove itself, as it struggles with a cluster of resistance points around 2,400 to 2,450 level. However, a proper breakdown will most likely signal a hard landing scenario for the Chinese economy. The crisis started in the US in 2007 and spread to the EU, but if we move towards a Chinese hard landing scenario, the final economic crash will most likely occur in Asia, where the boom has created over capacities in all economies from Indonesia to Korea and Australia.

Equity Markets
Nothing new to report.
Bond Markets
The second part of an article is a slight conundrum to the first part above. Here I focus on overbought Bond prices and extremely bullish sentiment that accompanies this assets. Therefore, one major problem when discussing a possibility of a recession, from a contrarian point of view, is that majority of market participants are already overweight Bonds as a fear trade. So the question is, if things get worse, will these safe havens go even higher? 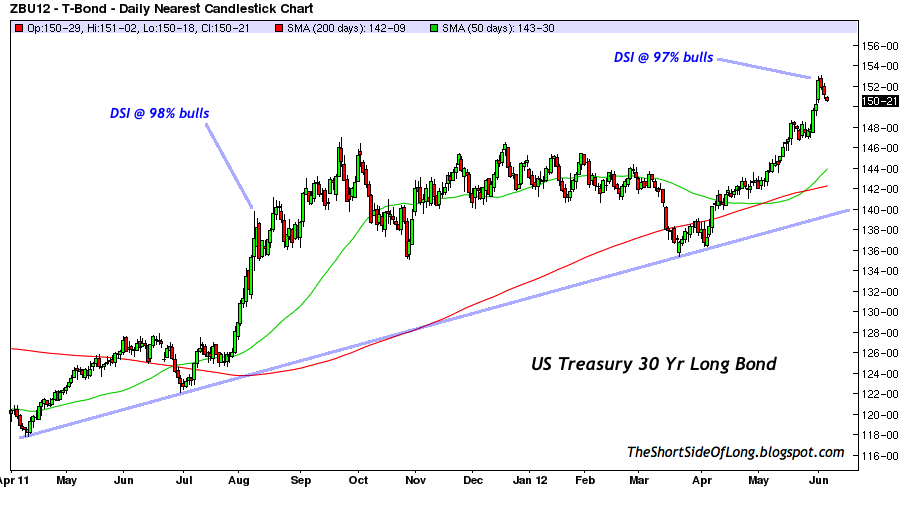 Focusing on the current outlook, be it German Bunds or US Treasuries, prices have gone almost vertical in recent weeks and yields have dropped to 200 year plus record lows. While the uptrend is still intact for the 30 Yr Long Bond and the bull market is still posting new highs, currently the Daily Sentiment Index is showing readings of 97% bulls as of Friday last week. These types of readings usually do not offer too much further gains and most likely signal that we could at least suffer a correction / pullback from current levels. 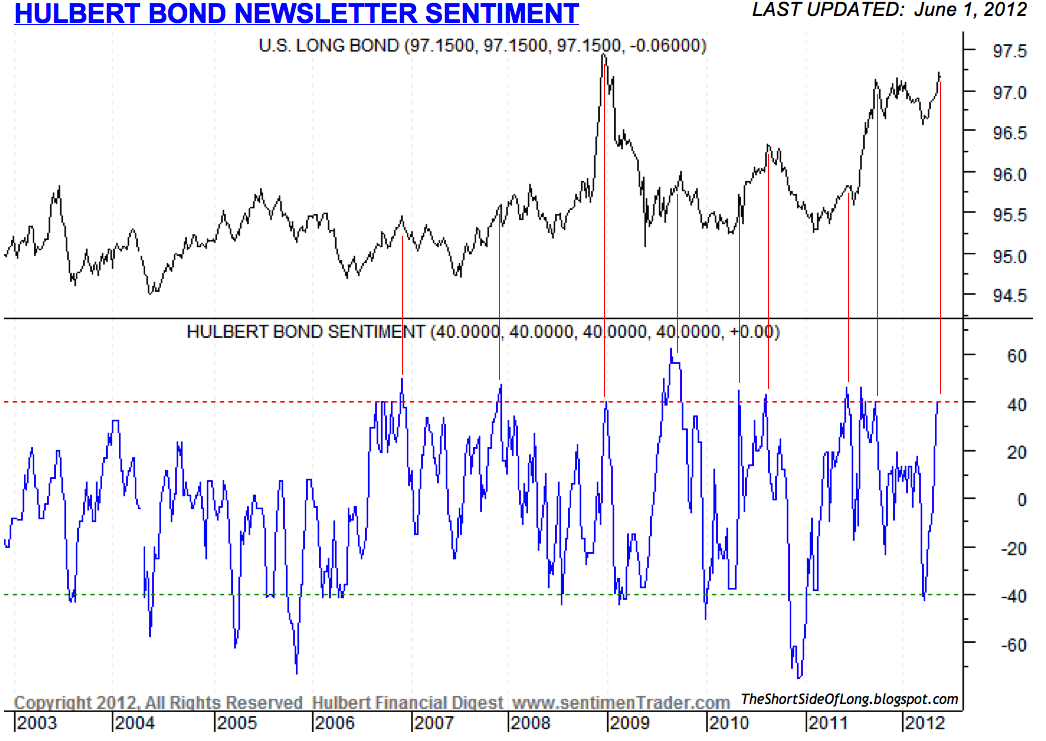 This view is also confirmed by the Mark Hulbert service of tracking Bond newsletter exposure recommendations. Consider that at present, Bond newsletters are recommending 40% plus long exposure towards this asset class. This a very dramatic switch from March 2012, where these same “gurus” were  recommending 40% net short exposure (and got it completely wrong). Historically, readings of 40% plus on each side have been very extreme and usually signalled that Bond prices reversed in some type of a counter trend rally.

Personally, I do not own any bonds in my fund, because I think they are a major major major major bubble! To led money to the US government at 1.5% over the next ten years is a total robbery when adjusted for true inflation figures, in my opinion. Therefore, I am waiting to short these assets, together with the Japanese Yen, at some time in the future.

Having said that, that does not mean prices cannot go higher from these levels, as overvalued bubbles can turn into manias and totally insane buying frenzies. Remember Nasdaq in 1999? Therefore, I am still reluctant to call a final top on the Treasury bull market, until the final EU crisis resolution and some type of a major default occurs to create a capitulation.

Short Side of Long Blog

Does Any Clear Picture Emerge From Gold And Crude Oil Charts?