This essay is based on the Premium Update posted on November 19th, 2010

A recently published paper that studied the stimulus efforts in 44 countries showed some interesting findings. Ethan Ilzetzki of the London School of Economics and Enrique G. Mendoza and Carlos A. Vegh of the University of Maryland argued in their National Bureau of Economic Research paper that fiscal stimulus can be quite effective in low-debt countries with fixed exchange rates and closed economies.

But stimulus measures are generally not as effective in countries like the U.S. with high debt and floating exchange rates. The authors of the paper pointed to a series of specific circumstances that throw a wrench into the effectiveness of increasing public spending: How much of the stimulus money ends up flowing abroad? How do investors respond to fear of future interest rate increases?

New York Times columnist David Brooks mentioned the study and wrote in a column this week:

When you look around the world at the countries that have come through the recession best, it’s not the countries with the brilliant and aggressive stimulus models. It’s the ones like Germany that had the best economic fundamentals beforehand.

It all makes one doubt the wizardry of the economic surgeons and appreciate the old wisdom of common sense: simple regulations, low debt, high savings, hard work, few distortions. You don’t have to be a genius to come up with an economic policy like that.

Our take is that the Fed knows that the stimulus is going to work as advertised, but they decided to go with it anyway, simply because they are desperate.

Speaking of geniuses and economic surgeons, in an unusual move, top Fed officials came out this week to defend their recent move to inject $600 billion more into a sluggish economy. The Federal Reserve has come under attack both at home and abroad with a torrent of criticism from foreign leaders, Congressional officials, economists and Alan Greenspan, the former Fed chairman.

Perhaps what unsettled the Fed officials most was an opinion piece by Greenspan in The Financial Times last Thursday. Greenspan said the United States was “pursuing a policy of currency weakening” and increasing the risks of trade protectionism.

Another barrage of criticism came in the form of an open letter this week to Ben Bernanke, in which a group of conservative economists, writers and investors urged that the Fed’s action “be reconsidered and discontinued,” arguing that the bond purchases “risk currency debasement and inflation.” The group included Michael J. Boskin, a former chairman of the White House Council of Economic Advisers; the historian Niall Ferguson; and the economist John B. Taylor, one of Bernanke’s most prominent critics.

In a rare on-the-record interview, William C. Dudley, president of the Federal Reserve Bank of New York said that the Fed’s move was not intended to affect the value of the dollar, but rather to encourage a quicker, stronger recovery. He said:

We have no goal in terms of pushing the dollar up or down. Our goal is to ease financial conditions and to stimulate a stronger economic expansion and more rapid employment growth.

And in an interview with The Wall Street Journal, the Fed’s new vice chairwoman, Janet L. Yellen, defended the decision in broadly similar terms.

Dudley rejected the idea that the Fed might be setting the stage for uncontrollable inflation in the future. Dudley cautioned that: One shouldn’t view this instrument (quantitative easing) as a panacea or a magic wand that’s going to make the economy recover rapidly. It’s going to be a long and bumpy road to a strong and vigorous expansion, but this will be helpful rather than hurtful.

We say, that remains to be seen. 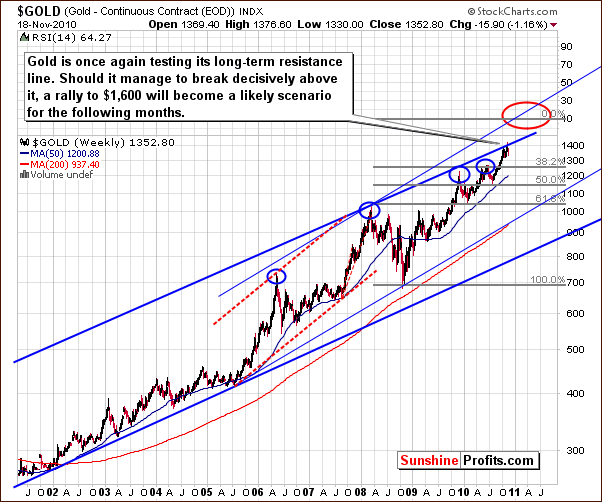 In the very long-term chart this week, we see that gold has not moved above the upper border of the very long-term trading channel. As we have stated in previous essays, this is an important resistance level. It was likely that some consolidation will be seen in the near-term so this should not be of any great concern as it is quite a natural phenomenon.

The important point is that our next target level, after moving above the trading channel will be close to $1,600. This target has been arrived at by utilizing two technical tools. One is the upper border of the accelerated trading channel and the second is extrapolation made my applying the 1.618 Phi (φ) number. Both tools indicate a likely move to the $1,600 level perhaps in the first quarter of 2011. 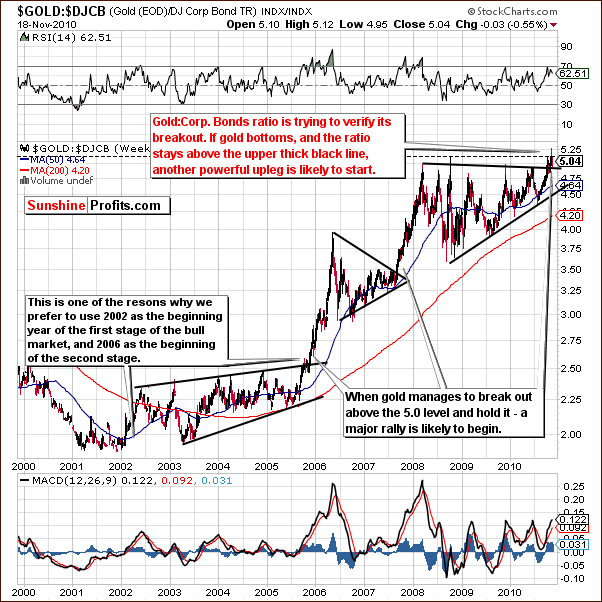 Our second gold chart this week looks at gold vs. corporate bonds. Clear trends have been seen in the past and for this reason we are including this chart as yet another perspective in analyzing gold’s current trends. Previous consolidation periods and breakouts have been followed by strong rallies with very sharp increases seen after the breakout occurs. This chart clearly allows you to separate the consolidation phase from the big rallies. Additionally, once the breakout is seen, the rally takes gold quickly higher. It seems that this may indeed be happening now.

As we have previously stated, if this index level holds above 5.0, a major rally is quite likely. What we have seen in recent days is, even with slight corrections and taking intra-day highs into account, this level has indeed held. The small consolidation seen immediately after a breakout is quite normal, and should not be viewed as bearish.

These are not the only bullish long-term charts that we have prepared for you this week. Let’s take a look at the XAU Index below. 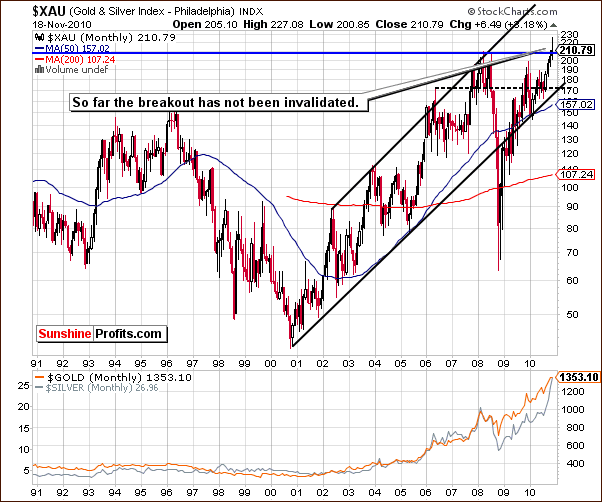 This week’s XAU Gold/Silver Index chart reveals that index levels have moved above previous highs and the breakout is presently being tested. Although not yet validated, this is a significant development, as the index values are here for couple of days. Therefore the situation appears to be bullish. It seems unlikely that this trend will reverse.

Looking back to 2005, a very similar trend can be seen. At that time (in the final months of 2005), the index moved to the level of the previous highs, declined and then moved up significantly. It seems quite possible that today’s trend will follow this very pattern. We will continue to monitor this situation closely and utilize our Market Alert capabilities when warranted. 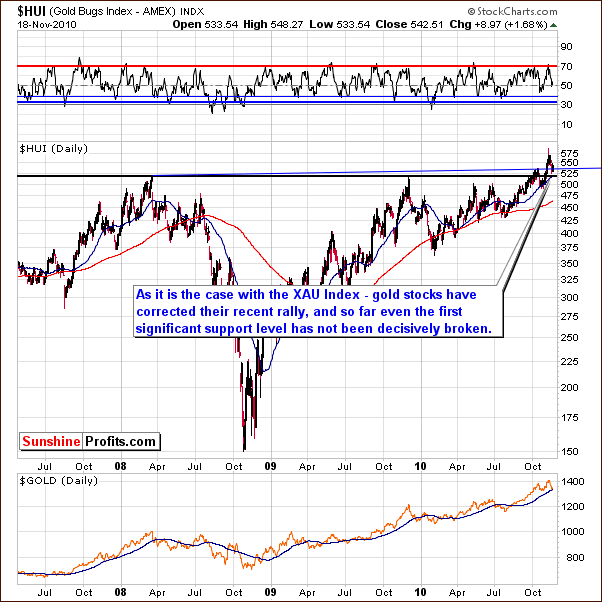 The HUI Index serves as a proxy for gold stocks, and on the above chart we have confirmation of points made earlier in this essay. The rally here is significant and the breakout is being verified. Two important resistance lines are being tested as support. So far the first support line was not decisively broken. We’ve seen intra-day moves below it, but finally the HUI index levels are now above it. This is a bullish indication for mining stocks going forward.

Thank you for reading. Have a happy Thanksgiving holiday weekend and a profitable week!

Market Says Be Patient With Entry Points For Gold