While Gold has seen a decent rebound, Silver and the mining shares (the more speculative side of the complex) have failed to sustain any rebound despite tremendously supportive sentiment amid an extreme oversold condition. Is the failure to rebound bearish? Not really. This is a sector that is completely sold out but there are yet to be enough buyers to generate a sustained rebound. The combination of strength in conventional asset classes (stocks and bonds) and poor performance over the past two years is causing this sector to read like the heart rate monitor of a heart patient. The sellers are gone and the buyers are scant. We believe the bottom is in and a rebound should begin very soon. However, we are more concerned with what will be the driving force for a sustainable rebound which will evolve into a new cyclical bull market.

Clearly, precious metals won’t sustain a rebound until the S&P 500 completes its cyclical bull market. This is something we’ve pointed out since late last year. That being said, never did we expect the equity market to climb this high. Since summer 2011, the gold stocks are down more than 50% while the S&P is up 45%. Meanwhile, the Goldman Sachs Precious Metals Index is down 25%. When stocks and bonds rise, there is no reason for the majority to consider alternatives such as precious metals. 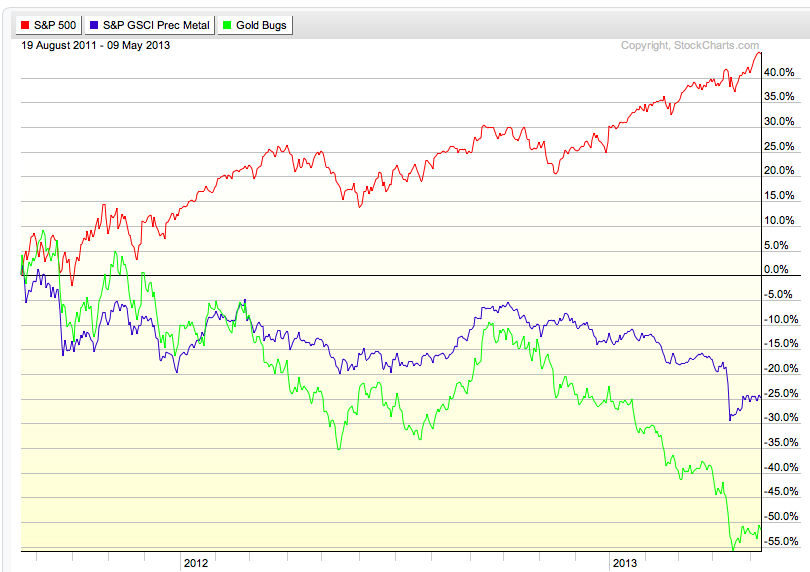 What we are seeing now is no different then what happened for a period during the 1970s bull market. The chart below shows the S&P 500 and the Barron’s Gold Mining Index (scaled 2x). From 1972 through 1977 the two markets traded inversely. Gold stocks surged during the 1973-1974 recession while the stock market declined. Once the economy and market recovered, gold stocks suffered. Gold stocks bottomed and rebounded in 1976-1977 as the stock market went sideways. As precious metals began their acceleration in early 1978, the stock market followed albeit slowly. 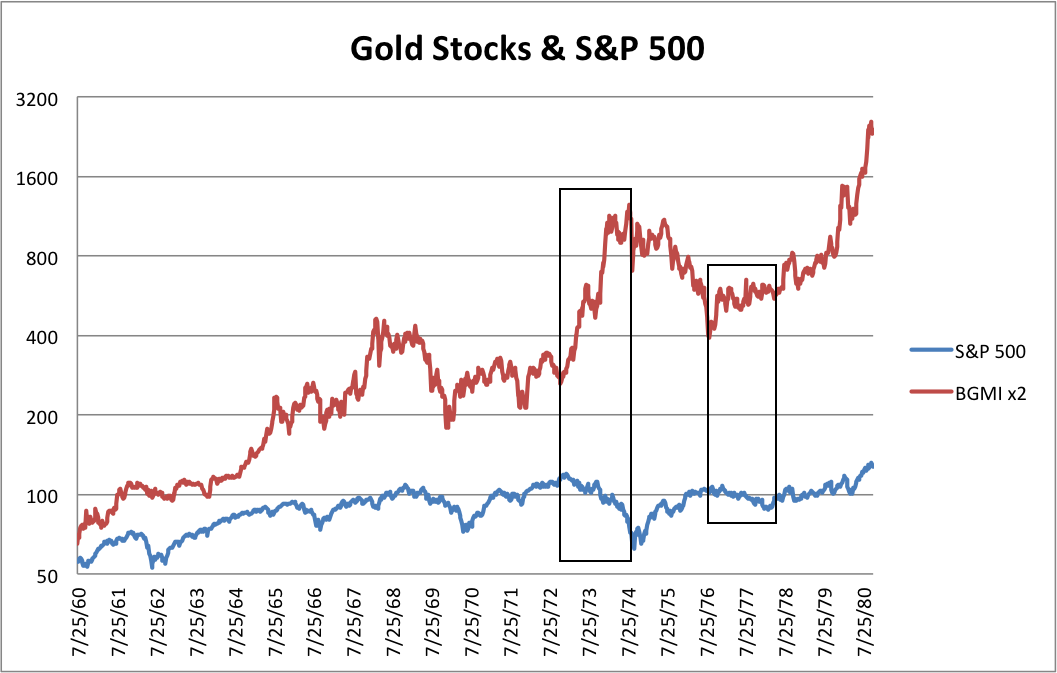 Moving along, the larger question at hand is will the final move in this bull market be driven by a catalyst of inflation or deflation? In the 1930s, the catalyst was deflation. In the 1970s, the catalyst for each cyclical bull was inflation. Within the current secular bull market, there have been three cyclical bulls which started in late 2000, the middle of 2005 and late 2008. The middle bull was driven by inflation while the two others, deflation. Note the chart below which plots commodities (CCI) and precious metals (GPX). 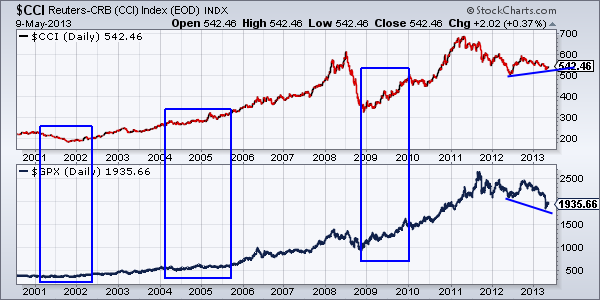 That is what happened in the 1976-1981 cyclical bull which ended the previous secular bull market. In the chart below we note that commodities bottomed at the very start of 1975 while Gold didn’t bottom until the second half of 1976. Interestingly, Gold then dramatically outperformed commodities and peaked first.

To simplify, rising inflation could be the catalyst for the next cyclical bull market and eventual secular top. While precious metals could be signaling deflation, commodities and equities are not. (The CCI hasn’t made a new low!) Money has poured into US equities and junk bonds as a way to earn a return in a low growth and low inflation environment. Government bonds have performed well but not as well as US equities and junk bonds. During deflation there is a search for safety. At present, there is a mad scramble for yield.

While the US economy will likely remain stagnant, the sudden torrent of interest rate cuts in the rest of the world could stimulate global inflation in 2014 and beyond. Recently, Australia, India, Vietnam, Brazil, Russia, South Korea, Poland and Sri Lanka have cut rates. Thailand and China could be next. The ECB cut rates and hinted that QE could follow. Japan of course takes the cake. Global monetary policy is becoming increasingly inflationary and that will ultimately be best for emerging markets and commodities. It will be bad for the S&P 500 which has attracted money as an alternative to cash and government bonds. Rising inflation would force capital out of equities, junk bonds and government bonds (all of which are at all-time highs) and ultimately into precious metals and commodities.

As for precious metals, we maintain that a major bottom has been reached and the next move is likely higher. It could initially come on the back of these rate cuts and increasing speculation in the equity market. The mining equities are sold out and refuse to go any lower and its only a matter of time before a relief rally begins. If you’d like our analysis on the companies poised to recover now and lead the next bull market, we invite you to learn more about our service. Steven Feldman: The Smart Money is Buying this Correction