By now, everyone has seen the chart of Homestake Mining and its bull market run from 1924 through 1935. Hence, there is no need to repost it. In this editorial, Frank Barbera shows a handful of charts of gold stocks and gold stock indices during the Depression era. US Gold producers apparently bottomed in 1929 while the Financial Times Gold Index bottomed in 1931. The time to buy the gold stocks was when deflation set in. More recently, the time to buy gold stocks and physical (Gold or Silver) has coincided with fears of deflation.

Below is a chart that that shows the Google search volume for “deflation.” Predictably, there is a big spike at the end of 2008. There is also a mini-spike in 2010. Unfortunately Google doesn’t have search data pre-2004. Policy makers had a fear of deflation during 2002 and 2003.

Below we plot Bonds, Gold, Silver and the HUI Gold Bugs index. We highlight the periods in which deflation fears emerged. That would be 2002-2003, October 2008 and briefly in the spring of 2010. All of course were buying opportunities within the bull market in precious metals. Note that the peak in Bonds in 2005 coincided with a major bottom in precious metals. 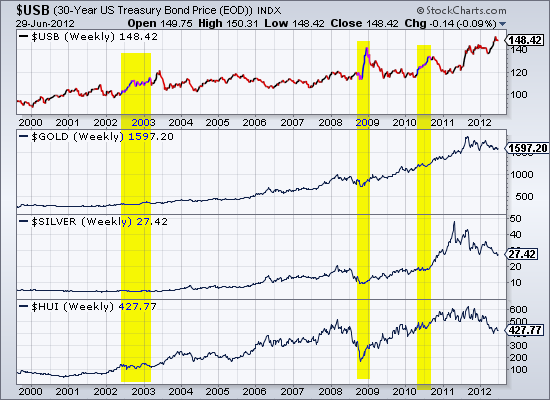 So why does the onset of or fear of deflation act as a catalyst for the precious metals sector? We must understand that in cyclical terms, this sector is counter-cyclical. It naturally underperforms when conventional sectors and the economy perform well. In that environment, there is declining investment demand for Gold. In the current era, economic recovery and growth are inflationary. While that sometimes is bullish for the metals, it can be detrimental for the shares as they struggle to maintain margins within an inflationary environment. Thus, it is the fear of deflation and fear of recession that prompts the inflationary policies which are bullish first and foremost for the precious metals complex.

Timing these “deflationary catalysts” is critical. It’s not so much the fear of deflation or deflation itself that is a catalyst but more importantly, its the response. In 1929, deflation caused prices to fall. Because the price of Gold was fixed, margins of producers improved immediately causing profits to rise which led to higher share prices and higher dividends. The response didn’t come until 1933. In 2001 the Fed slashed interest rates and wouldn’t stop until 2003. The bull market was well underway by 2002. More recently, the Fed began to cut rates in 2007. QE 1 was initiated in November 2008, weeks after the bottom in the sector, though it began to recover substantially thanks to the QE announcement. Finally, we can’t forget QE 2 in 2010.

So, what does this imply going forward?

Bonds are elevated, Gold is rising in real terms and the global economy is dissapointing expectations at an alarming pace as shown by the Citigroup Economic Surprise Index. 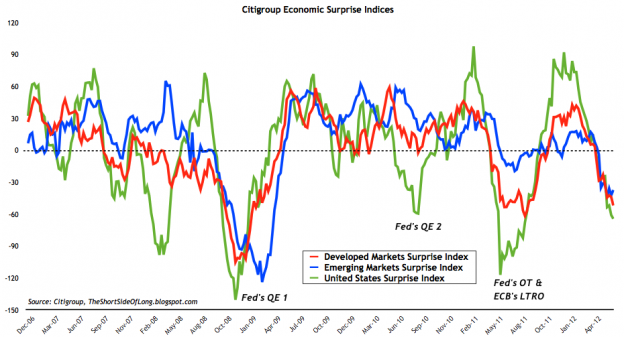 Although extremely oversold and forming a major bottom in a long-term sense, the precious metals sector is waiting for a catalyst to springboard its next cyclical bull market. Because the US economy is not in recession and the equity market is near its highs, new action from Bernanke is unlikely anytime soon. Europe appears unlikely to agree on any major action without a preceding crisis or panic. The precious metals complex may be able to sustain its May bottom without a major catalyst. That being said, it is the eventual actions of the European Central Bank, the Bank of Japan as well as the Federal Reserve which will springboard precious metals into their next cyclical bull market which could, in a few years evolve into a bubble. For now, we are making our lists and identifying the various stocks poised for substantial gains as Gold returns to $1900 and beyond. If you’d be interested in our professional guidance in analyzing companies and managing market trends, then we invite you to learn more about our service.