Gold is higher by 20% this year but the large cap gold stocks (GDX) are down 6% while the junior gold stocks (ETF) are down 25%. With Gold higher by 20%, we’d normally expect the gold stocks to be up 50% and more. Needless to say 2011 has been a difficult year for gold bugs. Its been a near disaster for most junior gold stocks. That being said, there are important but often ignored reasons why the gold shares have underperformed this year and reasons to consider why a big move may be only months away.

First, we have to understand that gold mining is a very difficult business. The law of numbers makes it even more difficult for the largest producers. They have to operate multiple mines and then continuously acquire or find new resources to maintain reserves and maintain production levels into the future. It’s a difficult business regardless of where the Gold price is. Hence, mining stocks do not outperform Gold over time whether in a bull market or not. The following chart is from Steve Saville who is one of the first to understand this subject. The surge in the 1960s was due to the Gold price being fixed. 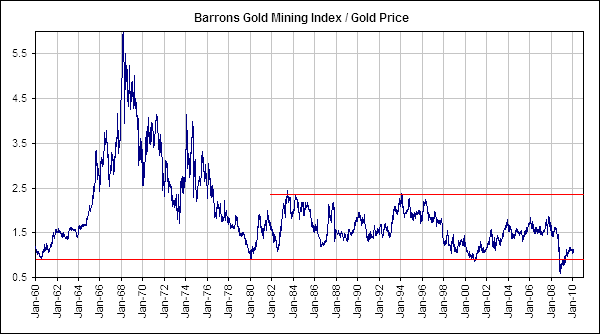 Also we must understand that Gold and gold stocks are entirely different markets that share different performance in a panic or crisis. Gold can be a safety hedge but gold stocks most certainly are not. They are the worst performers in any type of crisis. During the 1987 stock market crash, the gold stocks performed far worse than the market. The same happened in 2008 as the gold miners led the market crash.

During the present European sovereign debt crisis, the gold stocks have actually held up reasonably well relative to other stocks. From top to bottom, emerging markets and commodity shares have been hit the hardest while gold stocks declined in line with the S&P 500. Keep in mind we are referring to the gold stocks as in the large producers. The senior gold stocks are notoriously volatile but the hundreds of mid-tier and junior companies are far more volatile than the seniors. If the seniors fall 15-20% then others can fall 40% or more.

Moving along, one has to consider which is the best market index for tracking the gold stocks. We posit this as there are several indices but all are composed differently and therefore their performance is not always in line with each other. In the chart below we plot GDX, XGD.to, XAU and SIL. Note that GDX mirrors the HUI which is about 10% comprised of silver stocks. The XAU is comprised of 20% silver stocks and base metal stocks (FCX) while SIL, the silver stock ETF is 100% silver stocks. XGD is 100% in gold stocks and is priced in Canadian Dollars. 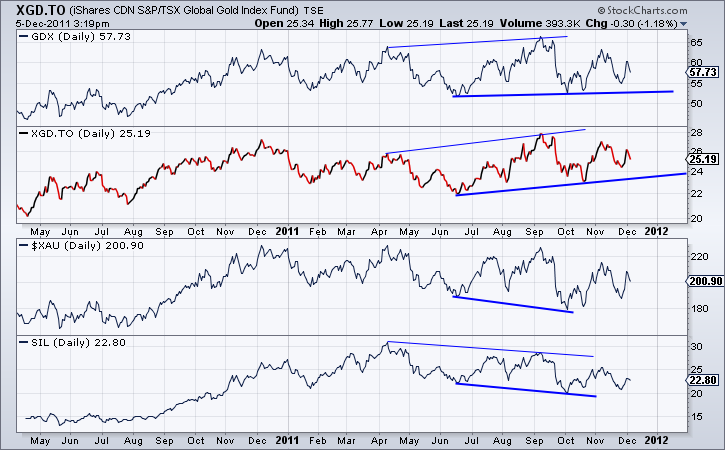 Judging from this we see that the weakness is almost entirely in silver stocks and not in gold stocks. XGD is holding up the best and is little threat to break its summer lows while XAU and SIL are in downtrends that began in April and printed new lows in October. Though the gold stocks have underperformed Gold, note that XGD and GDX did make new, albeit marginal highs in September. The reality is during a tough year gold stocks have held up relatively well while silver stocks and smaller mining stocks have trended down.

The gold stocks (GDX & XGD) have actually been in a consolidation that shares similarities to the consolidation from 2004-2005. See the chart below. 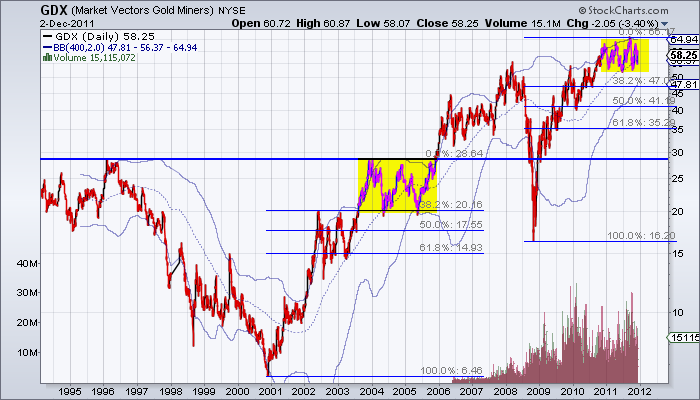 There is plenty of evidence that confirms we are likely in the latter stages of this consolidation.

Here is a chart posted by my friend Sean Brodrick. It shows the HUI index along with the price earnings ratio of the index. The PE ratio is currently at its lowest point in nearly nine years. 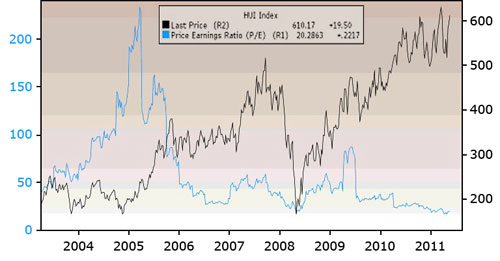 The good news is the gold equities are coming to the end of the consolidation and a resolution within months is likely. Sentiment is bullish from a contrary perspective. The consolidation has weeded out the week and impatient as earnings and cash flows for gold companies have improved and stock valuations have moved to multi-year lows. Even in Gold and Silver we see that speculative long positions are near multi-year lows. This setup combined with the forthcoming monetization in Europe, stimulus in China and more monetization from Bernanke could produce quite the launch pad for the gold shares in early 2012. If you’d like professional guidance in navigating what lies ahead, while managing risk, consider learning more about our premium service.