As we alluded to last week, there is an overflowing amount of evidence that both the metals and the shares have bottomed. Price action, sentiment indicators and fundamentals more than confirm a market bottom. Does this mean the market is ready to zoom much higher? Not necessarily. The sector must contend with some overhead supply as well as repair technical damage that caused a loss of both short and long-term momentum. Once the market forms higher highs and higher lows then its momentum can start to build. Until then, investors have some time to figure out which companies could be the big winners of the next cycle.By now, speculators and investors should have learned some lessons about investing in this sector. After three cyclical bulls and three cyclical bears, the cyclicality of this industry should be more than obvious. Most mining shares are not permanent buy and holds. Juniors or non-producers cannot sustain gains over the long-term and ultimately retrace the vast majority of their gains during the next cyclical bear. Even producers struggle to maintain gains beyond the current cycle.

Furthermore, it is true that the mining stocks have badly underperformed the metals. Yet, for anyone who has followed history this is not news nor surprising. As Steve Saville shows here, the mining stocks consistently underperformed Gold during the last bull market. You can throw out your XAU/Gold or HUI/Gold charts as buy signals because history tells us further lows could be ahead even as the bull market continues. I wonder if the conspiracy brigade thinks there was nefarious shorting of the miners in the 1970s.

The reality is two-fold: mining stocks as a group are notoriously unreliable even in a bull market yet many individual companies are capable of spectacular gains every cycle. This is exactly why stock picking is extremely important to success in this sector. In reviewing our own personal performance and performance for subscribers, we find that stock picking is far more important than market timing. Market timing should be used to find low risk and high risk points for your favorite stocks. The bulk of your time should be spent identifying those stocks.

Here is an example of how stock picking can make a big difference in your portfolio. Below is performance chart of six silver stocks and their performance over the past four years. These are brand name, well known silver stocks. We are not talking about obscure juniors. See how important it is to be in the leading stocks? 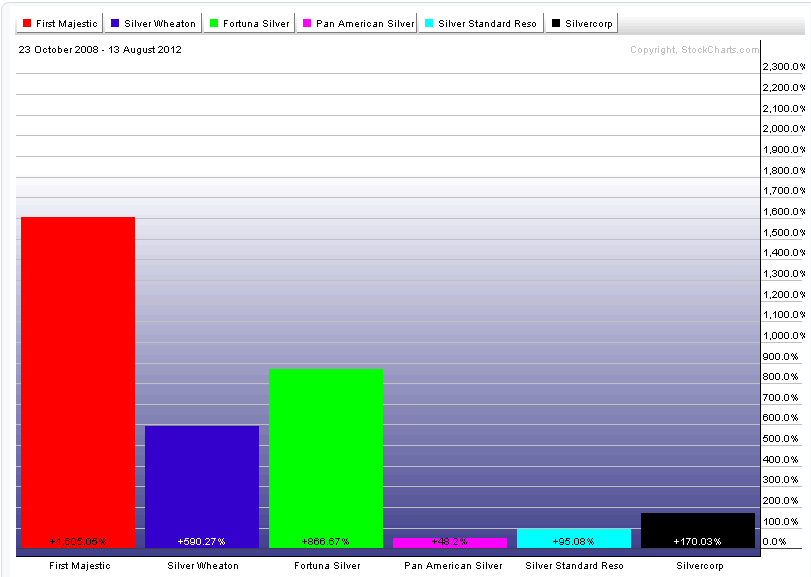 Pros like Rick Rule and Brent Cook often remark how too many investors load up their portfolios with too many companies and then have no idea why they bought them and why they still hold them.

Ok Jordan, so how do we find the big winners?

First, you need to define your goals and develop a philosophy to achieve those goals. Are you looking for income, growth or speculation? Realize that producers and non-producers are quite different. Non-producing companies are not going to provide you income or growth. They are a tool for speculation. We should know by now that large producers struggle to provide leverage even in a favorable environment. We prefer smaller, growth-oriented producers that have the ability to become mid-tier or larger producers. When it comes to juniors, we prefer management teams with a track record and companies with a strong capital structure. Lastly, buy on the cheap. Even in a rip-roaring market, the sector will have several 25% corrections per year. This is where patience is important.

As we confirm the start of the next cyclical bull, hopefully we’ve learned some lessons. This is a tough, bad business and even so in the best of times. Yet, the rewards are immense for those who are able to separate the wheat from the chaff. The good news is right now the wheat isn’t much more expensive than the chaff. Therein lies your opportunity. Ignore the pessimists and those who say mining stocks are manipulated. They just lack the attitude or skills to find the big winners. If you’d be interested in professional guidance, then we invite you to learn more about our premium service in which we focus on the producers and explorers best positioned for and most likely to take advantage of the next leg up in this bull market. Europe: How Much More Downside?