As the gold mining sector plunges to the end of a cyclical bear market, one wonders if this ongoing selling climax will precipitate a catalyst for more mergers and acquisitions in the industry. The last 12 years tells us that these transactions tend to follow the market itself but with a lag. Peaks in M&A activity (in global mining) in terms of number of transactions and value occurred in 2006-2007 and 2010-2011 while troughs occurred in 2002 and 2008-2009. According to Ernst & Young, 2012 had the lowest number of global mining deals since 2008 and the lowest in terms of value since 2009. On a smaller microeconomic level, the current depths of the junior mining industry and low share prices across the board should provide a catalyst for more deal flow. Going forward I believe we will see industry consolidation but in two separate different phases which will produce different winners.

The first phase should begin soon but will be the smaller phase. First we should note that one reason it will be the smaller phase is because the market is forcing the major producers to focus on execution, cash flow generation and dividend growth rather than production growth itself. On a per share basis, the majors have done a lousy job in terms of production growth. At the same time, many majors have new CEO’s who are unlikely to immediately take the kind of risks that doomed their predecessors. Thus, don’t expect the majors to participate much in this initial phase.

The established small and mid-tier companies who have growth mandates and posses financial strength and operational expertise will look to acquire quality assets on the cheap or distressed assets for pennies on the dollar. Obviously, the entire gold mining sector is going for fire sale prices right now and especially the juniors. These companies seeking growth will first look to see if quality junior-owned assets can be bought at a significant discount. Second, they will look to acquire the junior companies that currently operate underperforming mines (the distressed assets) which could be improved with an injection of more capital or technical expertise.

The largest driver of this initial consolidation will be the failure of a high percentage of junior companies. Through the brilliant work of John Kaiser we know that the junior sector will shrink considerably in a Darwinian sort of way. Simply put, too many of these companies have marginal prospects and will not be able to raise the capital to survive this difficult environment.

The second phase won’t begin until well after we see gold stocks (i.e GDX, HUI) break to new all-time highs and confirm the breakout. This phase is at least a few years away and could somewhat resemble the pac-man scenario, which Eric King wrote about in 2004.  Let me explain.

The gold stocks bottomed in Q4 of 2000. This bull market is currently in its 13th year. Two years from now it will be in its 15th year. Look at how much capital has been deployed into exploration yet look at the pathetic results. 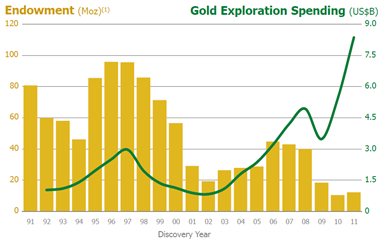 The exploration potential to add to production growth isn’t promising and requires too much time anyway. Secondly, the best assets will already be in production. What else might you find after 15 years of a bull market, 15 years of new mines going into production and 15 years of Billions being spent on exploration? Factor in stronger share prices and its obvious why this will be the phase when consolidation will heat up as producers acquire smaller producers. It will be the easiest and the only way to get production growth and reserve replacement.

What are the investment implications?

During the first phase the junior industry will contract substantially (as many others before me have predicted). Many juniors will die off as they can’t raise the money to sustain themselves while the juniors with the best prospects or with faltering productive assets will be acquired by the successful small and mid-tier producers. For the most part, the winners in this phase will actually be the acquirers who can add to their pipelines on the cheap and thereby inevitably become more desirable for a larger company in the future.

In the latter phase (perhaps 2015-2016), you’ll see the major and intermediate producers acquiring mid-tier and large junior producers. In other words, M&A activity will move up the food chain. Interestingly, in the final years of the secular bull market we’ll see more money chasing fewer companies. Unlike in the first phase, the winner in this phase will be the companies that are acquired. As for the short-term, we began scaling into positions last week but maintain plenty of cash to be deployed (potentially) at our strong targets of HUI 336 and HUI 300. If you’d be interested in professional guidance in uncovering the producers and explorers poised for big gains in the next few years then we invite you to learn more about our service.