2012 wasn’t a fun year for most Gold bulls. Seeing the S&P 500 outperform Gold and seeing Gold stocks get decimated through the 1st half of the year was enough to create suicidal sentiment that is now only marginally improved after another prolonged correction in the precious metals (PM) sector to end the year. But as the many calls for an end of the PM bull market by several of the same people who have been wrong / missed out the whole way up get louder, the risk in the PM sector gets lower and lower.

The bigger picture hasn’t changed and isn’t going to for some time: a major private sector secular economic contraction in the West being fought with manufactured money/credit units by governments and central bankstaz. This is not a period to favor paper, as reflected by common stocks, over Gold. My trade of the year for 2013 is the same as my favored trade back in August: go long the “Gold to Dow” ratio (or short the “Dow to Gold” ratio).

The secular chart of the S&P 500 (a broader index) to Gold ratio shows that time has run out for the paperbugs on this correction: 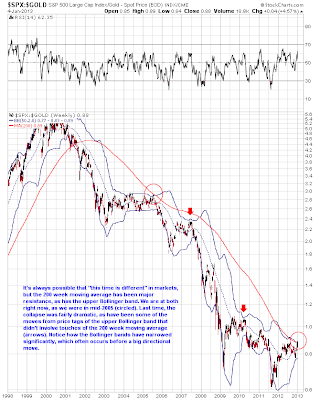 Of course, such a ratio chart doesn’t tell us anything about nominal prices of either of these items. But it does tell us that a shiny piece of metal with no dividends or growth prospects should continue to trounce the wizards of Wall Street over the next several years. This is the forest one does not want to lose sight of the next time Warren Buffett talks about how perplexed he is by Gold. Perhaps Warren should have listened to his father, Howard (a congressman), a little more:

“I warn you that politicians of both parties will oppose the restoration of gold, although they may outwardly seemingly favor it, unless you are willing to surrender your children and your country to galloping inflation, war and slavery then this cause demands your support. For if human liberty is to survive in America, we must win the battle to restore honest money.”

Now, I am not interested in politics, as I fully expect politicians to play their role and do the exact opposite of the right thing regardless of which party or platform they claim to represent. I also don’t believe that a Gold standard can fix the world’s problems, as governments controlling money is the problem, not the form of monetary system governments foist upon the masses. In most countries in the world currently, one is free to save in Gold rather than paper currency, which is the important thing for pragmatists like myself. But if one uses history as a guide, I think Howard Buffett was closer to the mark than his son Warren.

In any case, Gold will win over Warren and his paperbug minions this cycle because it is simply the time for this to occur. Cycles in markets exist much like cycles in nature, as financial markets are but a manifestation of the thoughts and emotions of one of nature’s more curious species. We are in a secular fear and uncertainty cycle for conventional financial assets, which benefits Gold.

Moving from the philosophical to the tactical, now is the time to be bullish on Gold and its derivatives, not bearish. The intermediate term correction from the fall 2012 highs in the PM sector was much longer and deeper than I thought it would be, but we are where we are now. And keeping a healthy perspective on the intermediate term, the current set up is much more likely to lead to a bullish outcome than a bearish one. Here’s a 12 year weekly chart of Gold thru Friday’s close to show you what I mean: 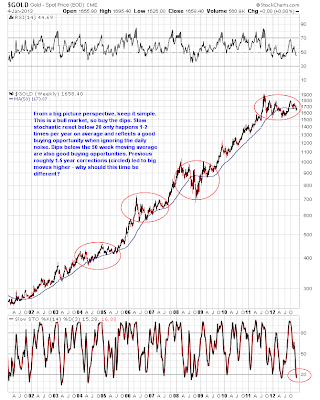 And the beleaguered Gold stock sector is also oversold and significantly undervalued for the 3rd time in the past year.  An interesting phenomenon occurred to end last week, however, in the small cap Gold mining sector. Using the GLDX ETF as a proxy for the explorer/small cap Gold mining sector, here is the weekly price action over the past few years thru Friday’s close: 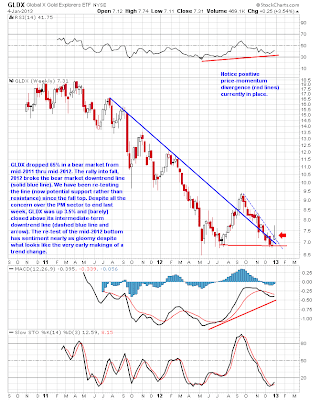 I remain wildly bullish on the whole PM sector. If you would like some assistance navigating the PM sector with an orientation towards trading the intermediate-term swings, I publish a low cost subscription trading service that is only $15/month. Otherwise, keep the faith and hold onto your PM sector items tight. Don’t let the short and intermediate-term noise distract you from what still promises to be a secular bull market for the history books. The Dow to Gold ratio will hit 2 (and we may well go below 1 this cycle).

Credibility of the U.S. Bullion Depositary and the Possible Price of Gold