These past few weeks as the equity markets rallied based on the belief of further quantitative easing by the Fed in November’s meeting, the dollar has collapsed which I warned readers about a couple of weeks ago.  Since that time gold and silver have had a historic and parabolic rise as investors feel the Fed will continue to ease through the end of the year.  Investor sentiment has reversed completely over the last 8-12 weeks since I signaled a buy on gold.  There are no concerns as bullish sentiment on equities and precious metals reach record levels. Investors feel the Fed will solve everyone’s problem by devaluing the U.S. Dollar.  The temporary band aid is not fixing any of the core problems.  Unemployment is still high and housing is weak.  Both the financials and the homebuilders are not participating in this rally which leads me to suspect this entire rise in the markets is not sustainable as it has been on low volume and key sectors have not yet participated.

In countries where there is a huge deficit the only solution to pay back debts is through a devalued currency.  Japan has recently intervened to try to devalue the strengthening yen.  A strengthening currency to countries with huge obligations can heighten the risk of default which many countries are facing.  Also a strong currency puts pressure on international corporations who export products abroad.  A weak dollar will cause the products to be more expensive to American consumers which will hurt demand and growth.  More sovereign debt defaults in emerging markets are expected.   It appears that from the European Debt Crisis that many investors ran to the dollar from the Euro.  I expect something similar to occur now.  The Euro is overbought and the U.S. dollar is reaching long term support.  The Euro is reaching a key resistance level and is overbought.  This means a pullback should occur.  The U.S. Dollar is extremely oversold and at long term support.  The bearish sentiment on the U.S. Dollar is extremely bearish which indicates a reversal should occur.

As global economies feel the consequences of the United States actions, I expect further fallout from weak economic growth and the sovereignvdebt burdens in Europe.  Many investors are pricing in a major move from the Fed.  I am not so convinced, equity markets are higher and the dollar has moved significantly lower.  Investors should realize that unless we see another sovereign debt issue or another bank failure that another major round of easing is unlikely at this point.  I believe the investment community is expecting too much from the Fed and it appears the Fed is doing an excellent job stimulating the markets just through speculation of a move rather than the actual move itself.

This last easing from the Fed has met with some more critics and it has definitely increased international tensions. The U.S. dollar has collapsed and is now testing long term support.  I don’t know at this point if the Fed will be so quick to act the next time around unless there is another deflationary crisis. 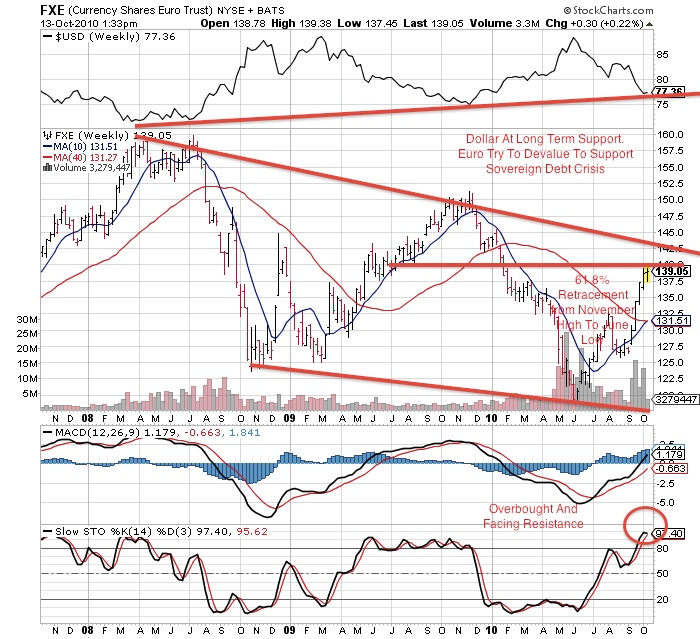 Technically the dollar is due for a bounce and investors should look for any pullbacks in gold and silver as a buy point.  Instead of the risk associated with buying bullion at these extended prices, many juniors who would be extremely profitable at lower gold and silver prices have not broken out yet.  To find out the juniors I am following subscribe to my free newsletter at goldstocktrades.com.

I believe these junior mining companies are presenting a great buying opportunity.  Remember on these recent parabolic moves, the faster it goes up, the faster and harder the correction.  Last Thursday showed a huge volume reversal day.  This indicates to me that some of the smart money are hedging their long gold and silver bullion positions for a correction.  Although we may see further upside the move is about to get exhausted as it has taken out many technical targets and measured moves.  Be careful of getting caught up in the hysteria.

The Contrarian Call on Gold