The Fed’s recent inference that QE3 was not imminent has caused physical gold and silver and the HUI and XAU to breach their downside support lines. These transitions set up the distinct possibility that we could well see $1,500 gold and the HUI and XAU at 400 and 144, respectively! Let me outline my analyses of the current situation and how it might unfold.

GOLD now in a downhill run

Gold had been in a 20-month long “Bump-and-Run Reversal Top” pattern but, with the recent events, has transitioned from the “Bump” phase to the “Run” phase. This should result in a downhill run in its price to the first support line at around $1,500/ozt.

Below is a chart showing how this trend should unfold: 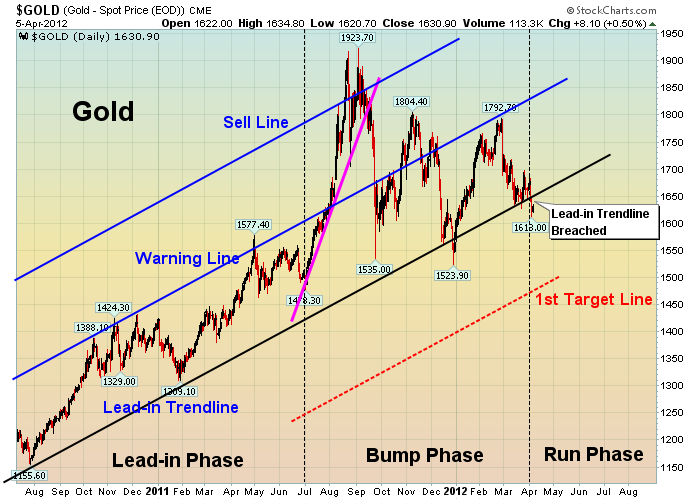 XAU & HUI have now broken to the downside

As the two charts below clearly show, both XAU and HUI have broken to the downside from their 7-month “Descending Triangle” patterns.  The descending triangle is a bearish formation confined by an upper descending trend line and a lower horizontal line.  Once a downside breakout occurs, a price target is projected by measuring the widest distance of the pattern, multiplying it by 54% price target meeting rate, and subtracting it from the breakout. Therefore, XAU could fall to 144 and HUI could fall to 400. Both should decline about 17% measured from the breakout.

For my analysis of what is unfolding for silver, the U.S. Dollar Index and 30-year Treasury Bonds please go here or read a version of it on the site of my editor, Lorimer Wilson, here.

Dr. Nu Yu is managing partner and co-founder of Numarkan Investments and an affiliate of the Market Technicians Association.  He publishes a free Market Weekly Update and Wilson posts a free Your Daily Intelligence Report