It was only a week ago we felt the gold stocks had a great chance of putting in a bottom. Monday supported our thesis but after Tuesday’s action and Bernanke’s jawboning it was apparent that the gold shares were in for a very difficult period. We immediately went long DUST to hedge long positions and trimmed some of our most vulnerable positions. We aren’t day traders personally or professionally (in our service) but sometimes you have to be considering the day to day volatility in this sector. Having accounted for the short-term, the next move is to gameplan for a potential major bottom in the sector.

Below we show the HUI Gold Bugs Index, which declined by 7% last week and closed at the lows of the week at 441. When a market is breaking down or plunging, it is our job to identify areas of strong support which could temporarily reverse the trend and potentially establish a bottom. The 50% retracement from the 2008 low comes in at 395 and 375 marks mid 2009 resistance and early 2010 support. 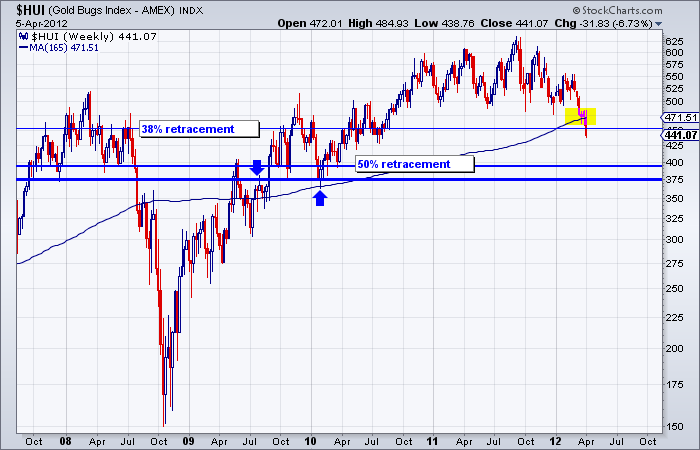 It is not groundbreaking news that sentiment in this sector is terrible. It is nearing 2008 levels. Yet, is the extreme bearish sentiment justified? We posit this because the HUI is currently 31% off its highs. Including 2008, this is the 6th correction of at least 30% or more. The HUI could fall another 13% to 385 and this decline would remain similar to declines in previous years. Sure, there is reason to be negative. This sector couldn’t perform with Gold, couldn’t mount any rebound from an oversold condition and now it is breaking down. However, the decline is likely to remain in line with past declines and the bull market is far from over. 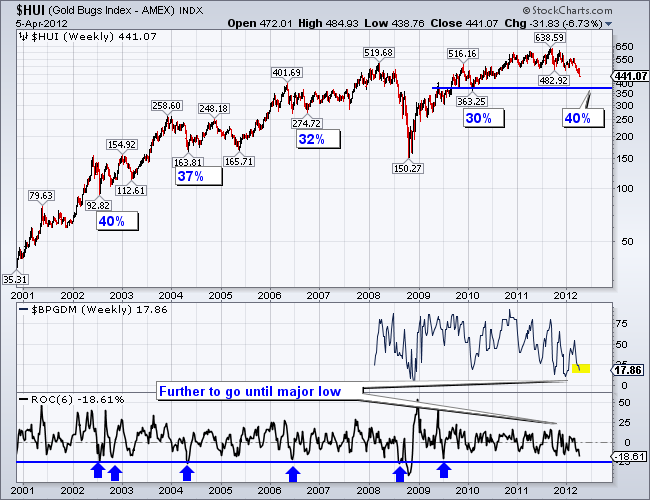 Over the past few weeks we were not sure if the gold stocks would form a stealth bottom or if we would get a panic selloff that would develop into a V bottom. As time passed we thought a stealth bottom could be forming. Now it is more than obvious that the market is likely to make a V bottom. The bad news is the V has barely begun. More pain is ahead. The good news is the market likely will be substantially higher six months and one year after the low.

This sector produced significant gains following the major bottoms from 2005 and 2008. Sentiment argues that his time will not be any different. First things first. Investors must identify strong support that could produce a V bottom or reversal. Second, investors should have a shopping list ready. This should include premier companies with strong fundamentals that can be bought at a discount as well as speculative ideas and instruments with extremely favorable risk reward scenarios. If you’d like professional guidance in this endeavour then we invite you to learn more about our premium service.

A Further Downside Run in Gold and Gold Stocks is Coming! Here’s Why