The underperformance of gold stocks was a hot topic at PDAC and continues to dominate discussion in industry circles. As to why the sector is underperforming, we hear numerous reasons. The conspiracy crowd will claim manipulation or hedge fund shorting. More well-reasoned thoughts include the struggle of large miners to adequately replace reserves and grow production and the continued issuance of shares. We believe one key reason is that the bull market is in the wall of worry phase and in this phase valuations compress as investors are nervous of among other things, another major correction. The HUI is trading at 15x trailing earnings and only 13x 2012 earnings. If the market returned to the historical average valuation of 28x earnings, then share prices would double (and that assumes present earnings). Yet, does the HUI or XAU even adequately represent the mining stock universe anymore?

The HUI is the go-to index for the sector but it is failing to represent precious metals equities as a whole. The HUI is currently trading at the same level as in November 2009. That means it has made no net progress in 27 months! In the same time period, Gold is up 42%. GDXJ, the junior ETF is up only marginally. The CDNX is up only 15%. I don’t know about you but I can think of numerous companies that have performed fantastically in the same period.

One problem is that these indices are being polluted by dramatic underperformance by certain companies which is not a reflection of gold stock fundamentals. Newmont Mining, which is a percentage of numerous indices, is at the same price as it was in 1996. Kinross Gold, Agnico-Eagle and IAM Gold have fallen 40% or more in just the past six months. This performance has little to due with negative sector fundamentals, yet it has a negative effect on the index and can greatly distort a correct analysis of the gold stocks.

Being sick and tired of the HUI, XAU, GDX, and basically any of these indices, we decided to create our own. This equal weighted index includes 10 of the largest, best performing gold companies. It is up about 40% in that 27 month period. The index closed Friday at 80 and we see a confluence of support at 68, which is also the 38% retracement from the 2008 low to 2011 high. 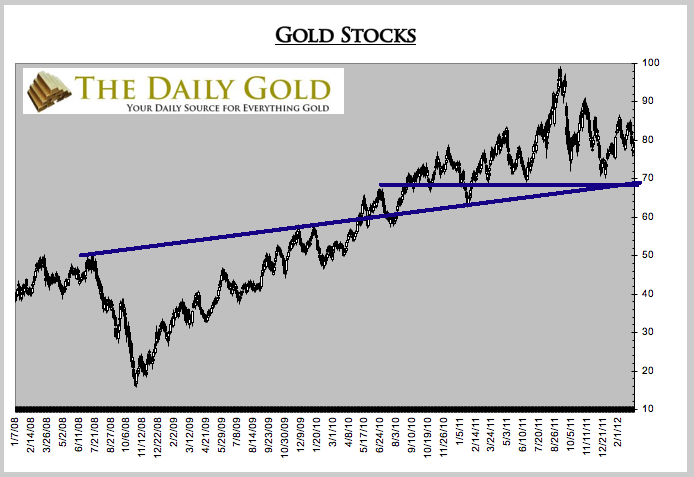 We’ve relied on our own proprietary silver stock index for a while. SIL, the silver stock ETF, is not too bad but it is exposed to Hecla, Pan American, Silver Standard and Couer D’Alene. These are four companies which have dramatically underperformed Silver in the past four years. Our index (shown below) contains 10 silver producers which are focused on growth. 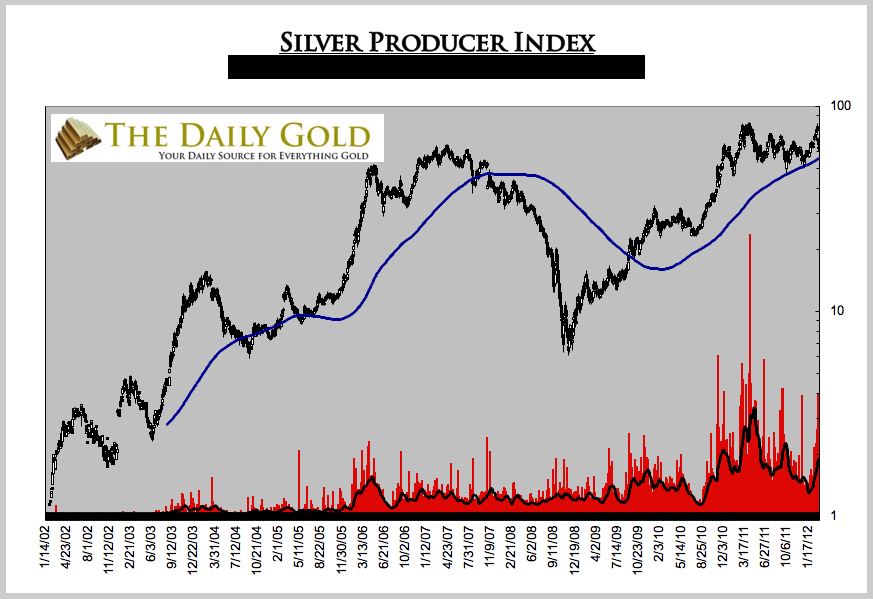 The underperformance of the mining stocks occurred in the 1970s and is occurring again. As we’ve argued countless times, there is no historical record of the large mining stocks outperforming. Mining is an extremely difficult business and even more so the larger the firm. It is the law of numbers. It is difficult to grow from a large starting point. Smartly, large gold miners are starting to increase dividends. They aren’t attracting growth investors so they decided to seek out value investors. This is a smart move.

Nevertheless, as you can see from our indices, there are many companies that are actually outperforming. The market of precious metals equities is not limited to the HUI or XAU. There are hundreds and hundreds of other companies out there. Moreover, it is very important to note that the large miners did not go parabolic in the late 1970s. The Barrons Gold Mining Index performed well but actually performed better in the 1960s. The reason is because the last third of a bull market sees increasing speculation. It was the juniors and small cap miners which received the speculative interest. At somepoint the market will diverge and the smaller miners will outperform the large caps. This is why we are focused on the smaller companies which show value and excellent growth potential. If you’d be interested in professional guidance in this endeavour then we invite you to learn more about our service.

A new twist on “Operation Twist”