I am not interested in shorting the stock market at this time. There is no confirmation that “the” top of the cyclical general equity bull market is in. This bull market is within the context of a secular equity bear market, which is far from over. When viewed in Gold terms (i.e. priced in Gold), this secular general equity bear market is deflationary. People still argue whether or not this bear market will end up being inflationary or deflationary when priced in U.S. Dollars. I hold my long-term savings in Gold, not U.S. Dollars, and I can appreciate the logic behind both the inflationist and deflationist arguments, but Gold will win either way due to the ongoing monetary chaos. When priced in Gold, we have unequivocal secular deflation that began at the turn of the century, and thus I will continue to hold the ultimate form of cash (i.e. Gold) until the dust settles. Having said all these things, there are some important bearish undertones to the general equity markets that suggest a cyclical general equity peak is near.

Things are always subject to change, of course, and this why punters have to pay attention more frequently than investors. On a speculative basis, I like to watch bonds, stocks, commodities, currencies and underlying technical measures of strength. All of the pieces tend to fit together, though not always intuitively. The chart that bugs me the most right now in the equity realm is China. And no, I am not talking about the FXI ETF for American traders, I am talking about the Shanghai Composite ($SSEC). Here is a 4.5 year weekly log scale chart of the $SSEC thru Friday’s close: 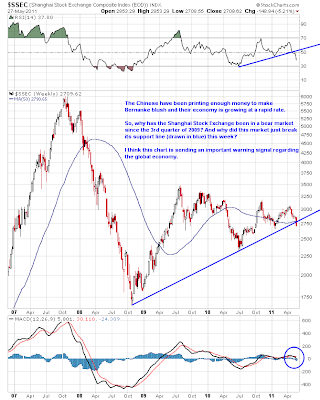 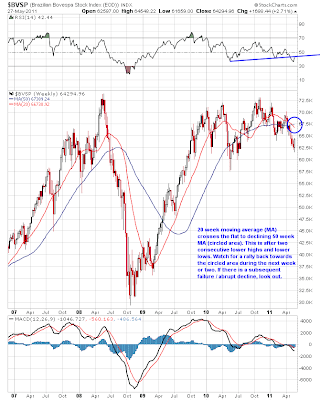 And although Greece is a small economy and a basket case, aren’t they really just another canary in the coal mine for what will happen to even larger economies before this secular bear is over? Here’s a 6.5 year weekly log scale chart of the Dow Jones Greece Index ($GRDOW) thru Friday’s close: 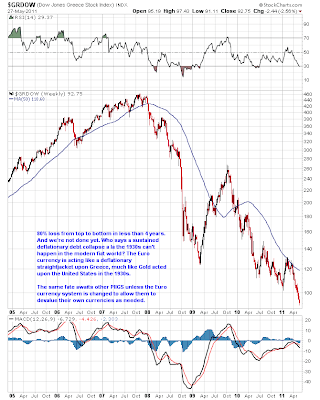 Larger, Western economies like the U.S. and Germany still have halfway decent looking charts that do not show confirmed tops yet. But the internals are starting to deteriorate in the U.S. markets. Financials and semiconductors, as sectors, failed to make new highs along with the S&P 500 last month. Also, here’s a look at the percentage of NYSE stocks above their 150 day moving averages (i.e. $NYA150R), an intermediate-term look at the underlying “health” of the market (i.e. percentage of stocks participating in a bull run), using a weekly linear scale chart over the last 5.5 years thru Friday’s close: 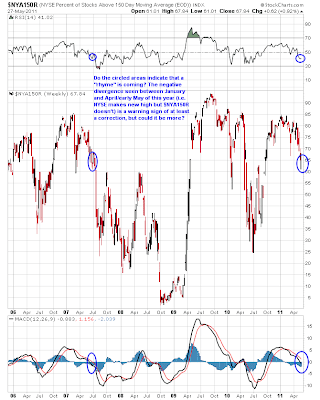 If this is a replay of 2007, a quick and scary 10% or so plunge (e.g., based on a Greek default) to scare everyone could set up one more run for a double top or slightly higher high in the S&P 500. This could also pull down Gold and silver and their stocks, a la August 2007. The government steps in, prints a lot more money, we get a bounce in stocks, and we get a major run in precious metals and their stocks while the equity bear market begins. Just a thought and not saying it will play out exactly like this, but it would fit nicely and shake out a lot of weak metal bulls before another run higher.

Here is another measure of deteriorating economic health, the Industrial metals ($GYX) to Gold ($GOLD) ratio. I will often use the copper to Gold ratio for this as well, but the $GYX:$GOLD chart over the past 14.5 years using a weekly log scale format chart gets the point across nicely: 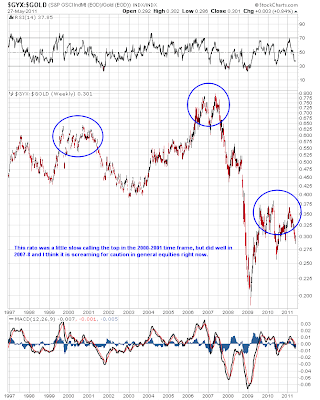 When inflationary policy is “working” and trickling down to the real, productive economy, base metals should outperform Gold. Base metal use is a sign of demand related to building things and the kind of economic growth most people would like to see (though it isn’t necessarily healthy growth as China’s ghost cities and the burst USA real estate bubble demonstrate). When demand for Gold is rising faster than demand for base metals (assuming price is a reasonable crude estimate of demand), people are scared and looking to protect their wealth via Gold, as they don’t see adequate capital projects in which to deploy hot money. This is my oversimplified view of economic reality, but it seems to work fairly well at “seeing” economic turns and I don’t think this time will be any exception.

Finally, a look at short-term US interest rates. Here is a 7.5 year weekly log scale chart of yields on the 1 year US Treasury note: 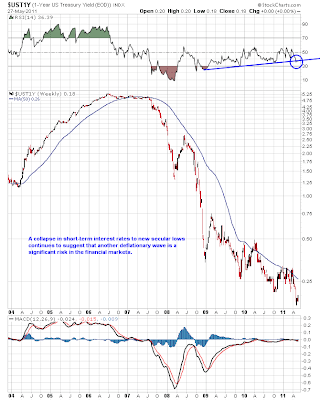 Why would big money pile into 1 year government paper at a return of less than zero (i.e. when inflation is factored in)? Why wouldn’t they just buy stocks instead? Or how about commodities? This is an unusual rate collapse at this point in the economic “recovery,” this so-called recovery a government economic theory to which I obviously don’t subscribe.

Once we have a confirmed cyclical equity top, I predict money will pour into Gold and Gold stocks. Much like in 2007-8, Gold and Gold stocks will rally despite a declining stock market. However, also like that time, speculators don’t want to stay bullish in Gold stocks for too long, as the really big downdrafts in the stock market (which likely won’t occur until 2012) will take the precious metals sector down as well. This should leave a good 6-9 month window for a classic (and potentially massive) fall speculative rally in shiny things in my opinion.

Long Weekend Ahead For Those Short Bullion