We began the week by making a ballsy prediction about the precious metals complex. We believed a major bottom could happen this week. In the wake of the European debt crisis and potential “credit events,” the precious metals became extremely oversold based on a number of metrics. Technically, we saw that Gold and Silver were nearing the December lows which produced a good rally. The gold stocks were nearing the 50% retracement of their 2008-2011 bull move. The combination of an extreme oversold condition and technical support usually produces bottoms. It wasn’t a difficult call but putting it on paper was. With the low in, the question now becomes, is this an interim bottom or will it be the major low we initially expected?

In this piece we are going to look at the equities because they lead the metals at key turning points. This was the case in 2007-2008, the end of 2008 and most recently, in 2011. Predictably, the mining equities will lead the next rebound.

Below we show a weekly chart of GDX. GDX was down 9 of the last 11 weeks and until yesterday, 10 of the last 12. The market has formed a very bullish reversal candlestick at the 50% retracement and on the highest weekly volume. 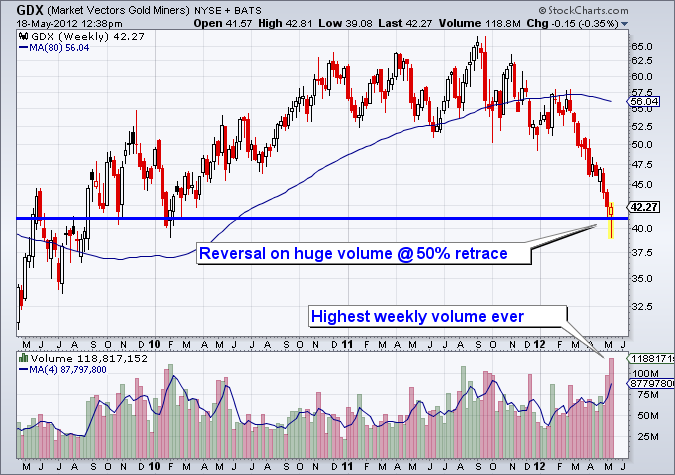 Next we show GDXJ, the “juniors” though it is comprised of mid-tier producers and larger explorers and developers. GDXJ has declined in 13 of the past 16 weeks. The market plunged at the start of the week but has now reversed most of the losses. The volume has been massive this week. Look at the tail on that candlestick! 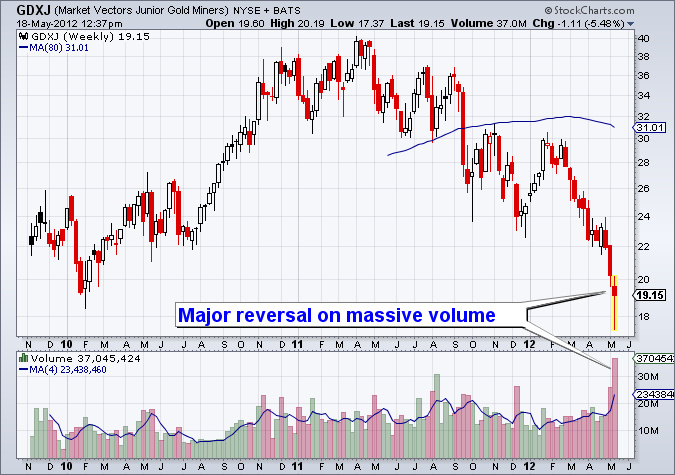 Ok Jordan, those charts are great and all, but how do they compare to 2008? First, let’s compare the breadth which is a fancy word for how much of the sector is going up or down. One breadth indicator anyone can use is the bullish percent index (bpi) which shows the percentage of stocks on a Point & Figure buy signal. 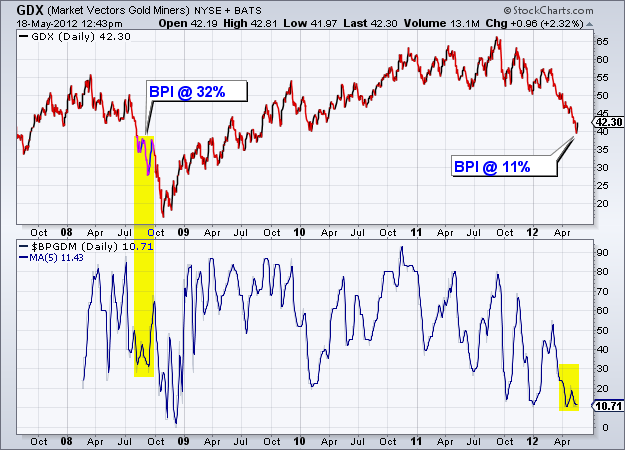 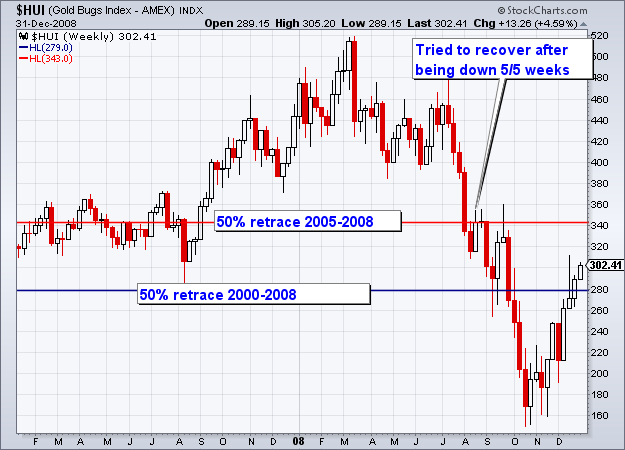 Judging from the technicals and recent sentiment data (presented in our Monday editorial), it is clear that the gold stocks are currently more oversold and much closer to a major bottom relative to the failed recovery in the summer of 2008. Breadth is far more oversold and the market has been in decline for several more weeks. Moreover, in our previous update we noted how sentiment indicators were nearing October 2008 levels. On Wednesday, the daily sentiment index for Gold reached 5% bulls. Assets in the Rydex Fund, which were $350 Million at one point, fell in three days from $103 Million to $91 Million.

We can form a conclusion based on the technicals and sentiment but developing events can can have an unforeseen and unpredictable impact. There are two fundamental forces that will impact the charts. First, we need to consider the ongoing turmoil in Europe and how and when it could negatively impact the market. Second, we have to juxtapose that with the inevitable monetary response which will be very bullish for Gold and gold shares. At the same time, we need to weigh those events with the market’s response. Currently, the gold shares have begun a predictable rebound, and this rebound will go a long way in confirming or not confirming our previous prediction. If you’d be interested in professional guidance along the way, then we invite you to learn more about our service.