We often write about the real price of gold (RPG) as it is a leading macro indicator and leading indicator for gold stock fundamentals. The RPG is simply a measurement of Gold in terms of various markets such as commodities, stocks or currencies. If the RPG is broadly outperforming then it could be signaling credit stress and even an economic contraction. If equities and commodities are outperforming Gold then it signals an improving economic environment and an improving credit environment. We also note that a strengthening RPG in itself is a catalyst for improving margins for gold miners. Furthermore, since a rising RPG is a contractionary signal, it can also be a catalyst for Fed action. The RPG appears to have bottomed and looks likely to trend higher in the coming months. 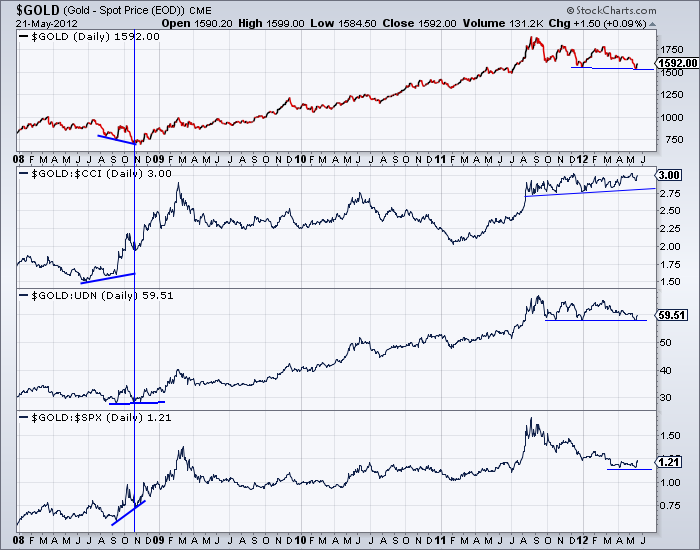 As we’ve written many times, the RPG can be a leading indicator for the miners. Below we show the HUI/gold ratio, the HUI, the gold/oil ratio and gold/industrial metals ratio. Note that significant advances in the gold/oil and gold/metals ratios initiated two strong cyclical bull moves in the gold stocks from 2001-2003 and from 2008 into 2011. If those ratios rise to new highs then it would definitely signal the inception of a new cyclical bull in the gold stocks. 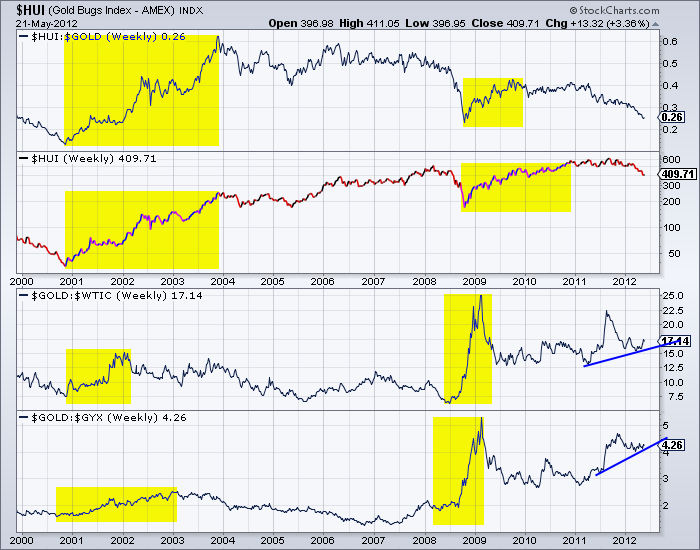 While the RPG surged into the 2011 Euro crisis, it wasn’t sustained as the crisis abated and there was no real threat to the economy. However, at present, the RPG is starting to move higher as the Euro crisis intensifies and as economic data continues to disappoint. If these troubles are only temporary then gold stocks will remain in a cyclical bear market. However, if these troubles persist through the summer and into the fall then they should kick-start the next cyclical bull market in the gold equities and a move in Gold to $2000/oz. The reason is simple. Persistent credit stress and a weakening economy will require more Fed action and action from the ECB.

The former is painful as it creates volatility and liquidation events but it also creates opportunities. We saw it in 2008 and we are seeing it now. With regards to the gold shares, proper stock selection is paramount as select stocks will dramatically outperform GDX and GDXJ, even as they recover. GDX recovered more than 300% in a little more than two years. Sounds fantastic right? 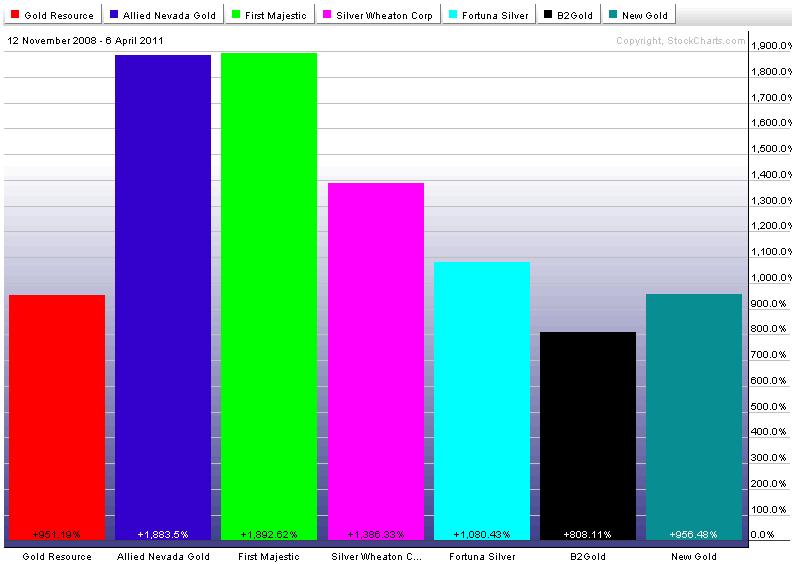 Check out the gains from producers over a two and a half year period. These were producers and not exploration or development companies. Now we are not implying that these numbers will be duplicated from 2012-2014 but it is certainly possible since many stocks will be starting from low levels. Simply put, the growth-oriented producers offer the best risk-reward and we urge you to focus the bulk of your capital on this segment of the market rather than speculating on risky exploration stocks. If you’d be interested in professional guidance in this endeavour, then we invite you to learn more about our service.