This essay is based on the Premium Update posted on September 3rd, 2010

“The European Union is dying – not a dramatic or sudden death, but one so slow and steady that we may look across the Atlantic one day soon and realize that the project of European integration that we’ve taken for granted over the past half-century is no more.”

With these dramatic words begins a eulogy of the European Union in a Washington Post article.

The problem is not just economic, but more political; a re-nationalization of political life with countries reclaiming the sovereignty they once willingly ceded for the collective eurozone ideal.

Economically, at least on the surface, things seem to be looking up for Europe. But keep in mind that economies can be like icebergs with lethal, unseen parts below the surface, like one common currency for very different economies.  We fear that the Eurozone will arrive at the same juncture again in about three years when they must pay interest on their current debt plus the one trillion in bailout dollars and repay the maturing debt. Given that governments are reluctant to take the high road now, the odds are small that they will do the right thing three years hence — outright default and debt restructuring. Then the debt bubble will be that much larger, the economy will be in worse shape, and the pain of default and austerity will be much higher than today’s.

Although there is little doubt in our minds that three years from now we will be glad that we invested in gold, right now we are more interested in what will happen in the near-term future since gold has enjoyed quite a ride up. Let’s take a look at the long-term gold chart (charts courtesy by http://stockcharts.com.) 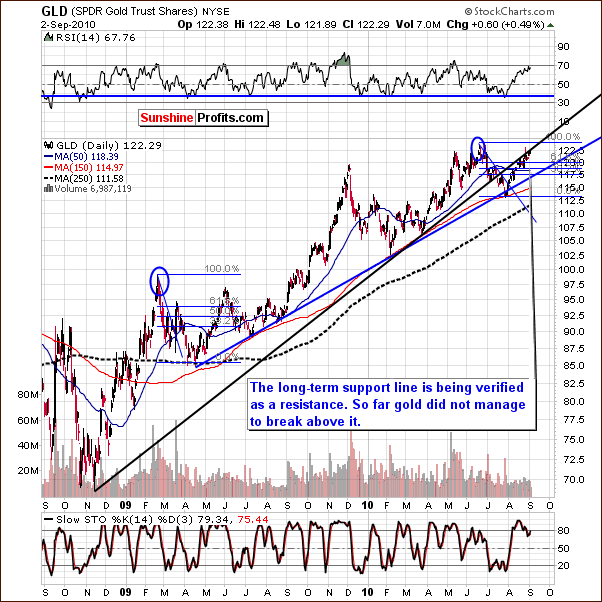 Gold has rallied but the long-term rising resistance line appears to continue to be holding gold‘s rally in check. The current trend is very similar to what we saw in May, 2009. We would like to remind you that at that time the subsequent decline was close to 5%. Notice at the top of the chart the current RSI level of 70. Many times in the past such a level has coincided with local tops, most recently May 2010, as well as in December, October, September, June and February, 2009.

This week’s short-term chart (available to our Premium Service Subscribers) caused us to revise our downside target area with specific numbers for the correction as a result of the strength shown by precious metals recently. Meanwhile, please note how straight the rally has been – without any serious correction. While this is not a technical indication by itself, taking this alone into account should make you consider the correction as likely, even before analyzing anything else. Could the buying power be drying up right now? The analysis of volume supports this view. Moreover, let’s take a look at the size of the rally compared to the previous one – the top materialized above the 61.8% Fibonacci retracement level, but below the previous top.

A correction still appears inevitable based on analysis using our normal charts and tools as well as incorporating new methods mentioned last week. Volume levels, RSI level and a study of similar previous trends all point towards a correction in the very near-term. Aside from these dependable indicators, the size of the current rally alone should make you cautious regarding any further gains.

While gold has been rallying lately, silver has really soared, which might cause some investors to question the above views. Let’s take a look at the silver chart for details. 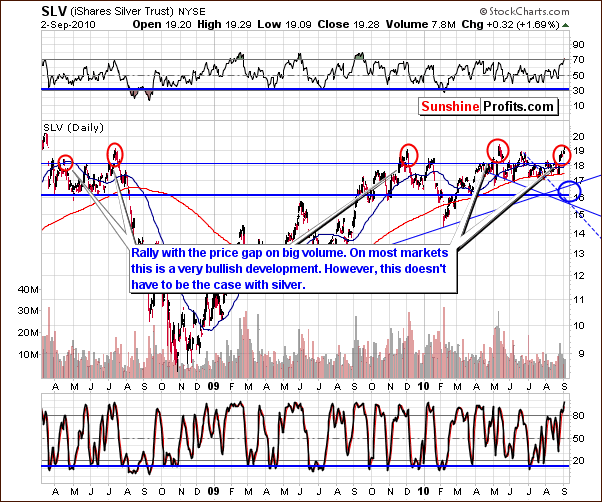 Silver’s performance has been outstanding recently, but it is not uncommon for the white metal to have extreme volatility both ways in its price moves. This week’s long-term silver chart shows that in the past, rallies of this magnitude are frequently followed by sharp declines. This was seen in early 2009, again in June, December 2009, and once again in May 2010. Consequently, there is simply no denying that this possibility of a quick decline is out there and investors should proceed with caution at this time until such a correction has been seen.

Silver’s price is but ½ of 1% higher than in mid-May, nearly four months ago. This sideways price movement seems likely to be simply delaying the obvious needed price correction to atone for the rally seen last spring in which silver’s price rose nearly 33%.

As mentioned in several previous updates, “silver analysis is quite tricky and frequently, the typical market signs do not apply. General speaking, a separate interpretation is needed when concerning the white metal. Volatility is commonly seen as well when analyzing silver’s charts.” 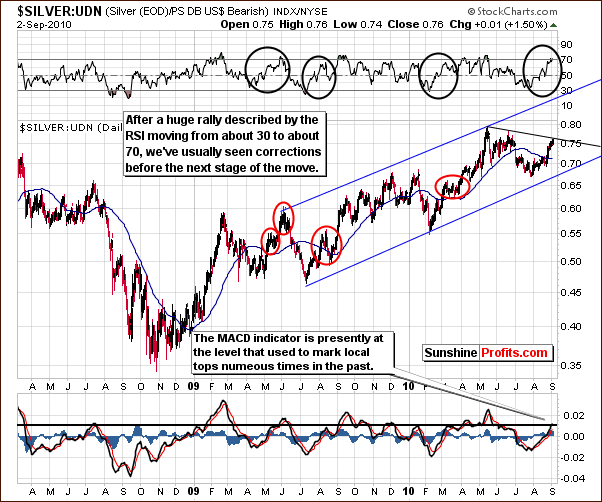 A relatively new chart, which we are using this week looks at silver’s price action from a non-USD perspective. Several points of interest are notable here. First, the resistance level created by a line connecting the May and July local tops is very close to today’s closing level for the silver:UDN ratio. Secondly, the RSI is nearly right at the 70-level, having risen from about 30 in just over a month. Please note that in the past this meant at least a weekly correction.

Finally, the MACD in the lower level of the chart is near the horizontal black line around .01 just after having crossed the 0 level. All of these factors have coincided or indicated local tops on many past occasions. This is further, consistent indication that a strong possibility of a local top exists for the very near-term.

We need to take a closer look at gold for timing details because at volatile times in silver actually anything can happen, so we need to use guidance provided by other markets than the price of white metal itself.

We received several questions about the silver market this week and its ability to spike very high without taking a breather in the short run (caused by silver shortage, default of the entities that are massively short silver, etc.) The reader wanted to know if we are sure that we will be able to tell when this could occur. The answer is that nobody can be sure about their ability to predict future. That is why we encourage our Subscribers to use part of their holdings to buy real gold and silver bullion products, and then to use the rest to diversify between long-term investments and speculation. This way they are still exposed to silver’s sudden appreciation while leaving only small part for speculation on the short-term price swings. This is a way of hedging against missing a big move.  We believe this is a right (and most importantly – profitable) thing to do.

There is an excellent chance that the period following an eventual correction will present investors with a tremendous opportunity with respect to risk-reward ratios and profit potential. Sunshine Profits will stand ready with our Market Alert capabilities should important developments occur before next week’s update.
To make sure that you do not miss our Market Alerts and are notified once the new features are implemented, and get immediate access to my free thoughts on the market, including information not available publicly, I urge you to sign up for my free e-mail list. Sign up today and you’ll also get free, 7-day access to the Premium Sections on my website, including valuable tools and charts dedicated to serious PM Investors and Speculators. It’s free and you may unsubscribe at any time.