And so castles made of sand
melts into the sea
eventually

Debt-backed paper currency is always a castle made of sand but “eventually” corresponds with debt saturation. Once debt can’t be paid back and everyone knows it, what happens? Default or aggressive debasement. There is no “Goldilocks” in between just as there wasn’t when CNBC said there was all throughout 2007 (the big boyz needed someone to buy their stocks…). Two options. Literally default or default “in spirit” by paying back the nominal amounts owed using a fresh pile of counterfeited monopoly money that everyone knows you just counterfeited.

Not much of a choice, really. Default nominally or default in real terms. The truth can be a mixture of the two and that’s why the inflation-deflation debate is more nuanced than it seems. You don’t have to pick a side. This isn’t a democrat versus republican debate here. There are practical implications of not realizing this debate is just an intellectual distraction for Gold investors. Many get caught up in the cognitive dissonance of buying into the deflation theme without recognizing that Gold is the money of choice when the sky gets too dark economically.

Gold did well during the 1930s and Gold did well during the 1970s. Certain deflationist commentators (ahem, cough, PRECHTER) have the gall to suggest that Gold did well in the 1930s because it was pegged to the U.S. Dollar rather than vice versa. The Dollar was king in the 1930s because we were the last to default on the Gold standard! When Europe, led by the senior British economy, left the Gold standard and destroyed the value of their citizens’ savings by decree, the citizens panicked and sought to buy Gold just as Europeans are doing today.

Just as the US Dollar was a false safe haven then (for those who didn’t manage to convert it into Gold in time), so are the GLD and SLV ETFs today. For they will default when investors need them most. Human nature hasn’t changed regardless of how fancy, electronic and “sophisticated” the promises are. Let’s just say if there are any bulk holdings of tungsten-salted Gold bars anywhere in the world, they are in the GLD ETF. I am obviously not averse to speculating in the paper markets and love the casino as much as the next market participant, but let’s call a spade a spade. There’s insurance and savings, and then there’s speculating/investing.

Gold is money, while debt-back fiat paper is transactional currency enforced by the barrel of a gun. Forget the politics, though, let’s get to the money. The U.S. Dollar Index is not a measure of anything but anchorless paper to anchorless paper. Trampoline jumping in paper fiat can be a fun casino game, but if you don’t want to play and understand how rigged the game is, buy Gold.

Castles made of sand are not as relevant to the Gold price as you may think. Want proof? Here’s a 3 year daily chart of the U.S. Dollar Index ($USD, green area plot) versus the Gold price ($GOLD, black linear plot): 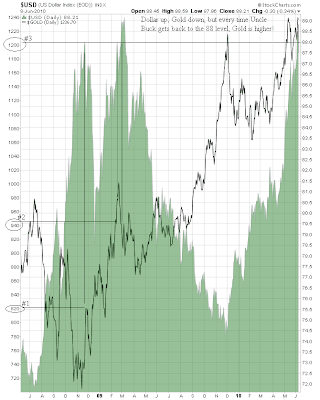 Now, I have long believed that we are closer to the 1930s than to the 1970s. However, when the measuring stick can be jerked around at will by apparatchiks and central bankstaz, what do you think is going to happen? This is where the 1930s and 1970s are much closer than people think when it comes to investing. The link is the Gold sector, whether metal or miner. How can Gold do well during deflation and inflation? After all, they are different!

Yes, just like democrats and republicans are so different. Those focused on the inflation or deflation argument are like those who think Obama and Bush are opposite, despite our Nobel Prize winner being a war president and bailing out Wall Street while our “gentleman’s C” Yale graduate enacted Medicare Part D and ran deficits that made Chavez proud. The link is Gold. The link is instability. Not buy canned food and guns instability, but monetary and political instability. I think those who failed to buy a log cabin and Spam (Roubini’s favorite investment) did OK during the 1930s and 1970s as long as they bought Gold and ignored the government when it told them not to buy Gold (i.e. most Gold ownership became illegal for ants starting in 1933 and was still illegal in the early 1970s). Do you realize that Gold ownership was illegal in America at the times when its citizens needed it most? Coincidence?

The international monetary system was destroyed in the 1930s and again in the 1970s. That’s the link. Monetary chaos. Anticipation/Recognition of terminal sovereign default (i.e. more than usual) and a change in the monetary system rules promised by governments and their bankstaz. You don’t have to know the deflation-inflation result to know how to win during this scenario.

It is really about relative value. This is where people get confused. They only calculate gains in paper debt notes, not in other things they want. The Dow to Gold ratio negates this faulty thinking. Yes, many of us want to be millionaires, but only because of what $1 million may buy us. If a basic 2 bedroom house costs $500 billion, who cares if you are a millionaire? This is the trick behind Dow 10,000 multiple times during the same secular bear market (just like Dow 1000 during the 1970s): each time it is reached, it means a greater loss of wealth. Not 5 in 100 paperbugs understands why the 1970s was just as bad as the 1930s for buy and hold investors in the stock market.

Having said that, not 10 in 100 hard core Gold bulls understands that a deflationary collapse is extremely bullish for Gold. Gold is real money and is not backed by debt, rather backed by the knowledge that apparatchiks and their central bankstaz will do the exact wrong thing when things get darkest: punish those who bought into their promises. Punish those who saved their wealth in the fancy paper notes of the land, whether obligations of the government (i.e. government bonds) or their central bankstaz (i.e. currency notes). How many millions of people have been burned by holding their life savings in paper money only to see the value of those saving destroyed by a one-time decree? How many people who held Gold through such times regretted it?

Governments are self-serving beasts with an insatiable appetite for growth that makes many of their keiretsu central banksta partners blush. However, the bankstaz know that debt is debt and it all pays the same interest. Government debt is actually more likely to pay if you are a central banksta and you will be notified in advance if a default is coming, unlike with those darn private borrowers that just walk away! Pusher and addict in a circle jerk of love that ignores the common citizens, who should, of course, eat cake.

When we get to the bottom of the current secular stock bear market, price to earnings (no, not operating earnings) ratios and dividend yields in the Dow and S&P 500 should both be in the high single digits. If you stay invested in general stocks until that point, you won’t have much money left to buy stocks cheaply when the sale occurs. If you stay in Gold, you will be able to purchase 500-1000% more stocks than your paperbug neighbor in the “keep up with the Jones'” sweepstakes. Those stocks reflect real wealth if those businesses actually pay a decent dividend and are primed for growth by getting lean and mean enough to survive intact on the other side of this secular bear, which is far from over. In the mean time, the only stocks to consider for a buy and hold are those of the Gold mining firms that dig money out of the ground.

Paperbugs don’t like Gold because it is an admission that there’s nothing better out there. Why else would you want to be in cash? Cash is boring. Of course, making 15-20% per year isn’t that boring after a few years of compounded interest, but Gold is a vote of no confidence in cash producing businesses. It is a guess that sluggish growth and fiscal insanity are the terms of economic engagement. These themes don’t generate ad revenue (other than from Goldline and Cash4Gold) or make apparatchiks happy, so why talk about them when your goal is to sell lots of high-priced ads and keep the regulators off your back?

I get off the topic most near and dear to my heart when I turn to the casino action because I think I see something the other patrons don’t, but playing in the casino is different than being smart with a significant portion of your savings (somewhere in the 10-100% range depending on risk tolerance). And smart is Gold this cycle. Physical Gold. A castle made of Gold may well slide into the sea at some point, but not until the Dow to Gold ratio gets to 2, and we may well go below 1 this cycle.

The Scramble for Gold is On…