If you have been a regular follower of this blog, you would have noticed that I am extremely optimistic about the long term prospects of Precious Metals. I continue to buy during this bear market and try to time as many major intermediate lows as possible. However, simultaneously, I have also stated on many occasions during late 2011 and 2012 (on this blog and elsewhere) that Gold will break lower below $1,530. Many other investors and bloggers disbelieved this theory and argued that it was impossible based on their “cycles” and “theories”. Well, here we are at $1,225 per ounce.

I guess one could say that it might be easy to make these types of posts in hindsight, but back during 2012 I also put forward this type of thinking. It should have been only normal to expect Gold to correction at least 20% to 30%. After all, it had an amazing run of 12 annual calendar years of gains in the row (my research shows 2nd best was Nikkei’s 10 year run during the 1980s prior to a crash) and that a major correction was and still might be needed before a secular bull market resumes.
Chart 1: Gold is not yet as oversold as it was during the bottom in ’76 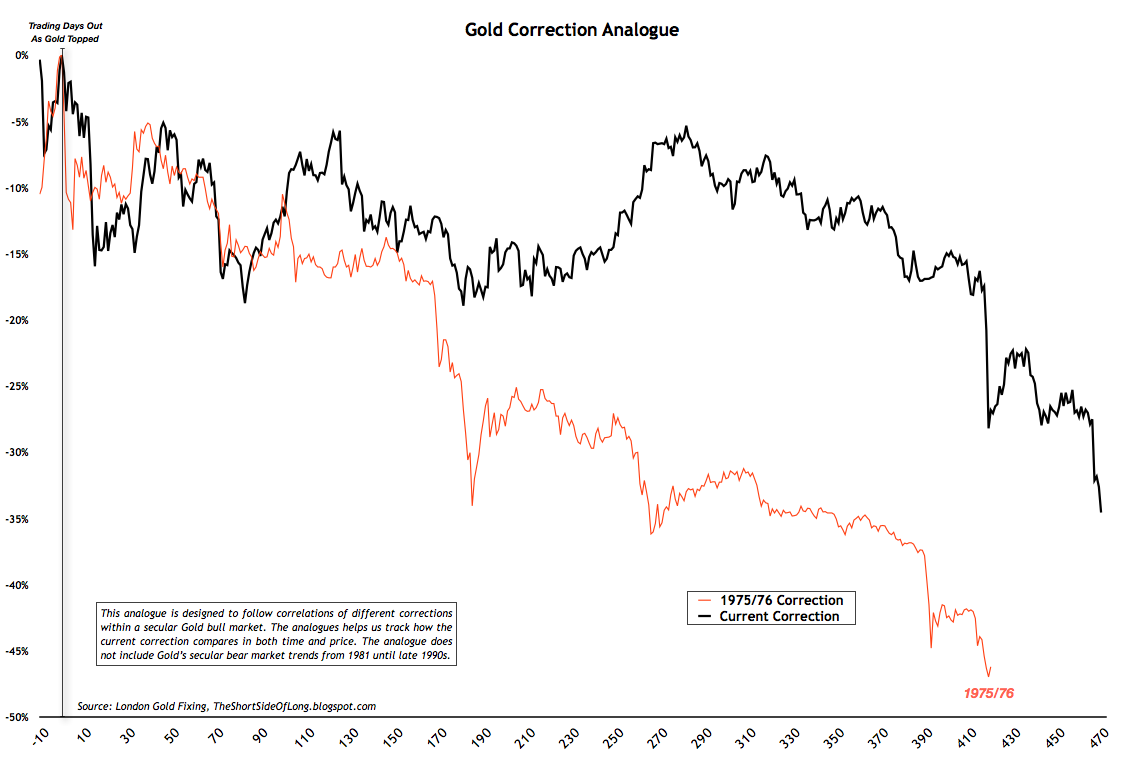 Source: Short Side of Long
Sure, Gold miners have been beaten down very hard in 2012 and once again in 2013. Furthermore, junior miners are down almost 80% from their early 2011 peak (hahaha)! But the fact of the matter is, the chart above shows how the current correction in Gold is still not anywhere as oversold as during 1974 to 1976. Even with todays sell off in Asia, which pushes Gold closer and closer to $1,200 per ounce, we are barley down 35% from their original peak in September 2011 at $1,921 per ounce.

Gold is the key asset for the whole sector, so it doesn’t really matter how oversold miners or silver or platinum is… until Gold finishes its downtrend, nothing will bottom. Now, please do not misunderstand me. I am not necessarily saying that Gold will correct as bad as it did in mid 1970s, but it very well could. And to make matters even worse for the perma-bulls out there, why couldn’t Gold fall even more then in 1976?

If we reach $1,150 that will be a 40% decline from the top, but still not as bad as 1974/76 sell off. And that is only about $70 lower from the current levels. As I stated many times, the only way parabolic blow off tops can occur (which I am betting on in both Gold and Silver) is to have a huge bear market crash before hand and currently we are definitely in the middle of it (or maybe near the end).

In my view, the current downtrend and discounted precious metals prices are offering a lifetime buying opportunity. We are moving closer towards a global currency crisis, which will affect confidence of all investors and the only way to protect yourself is to own some precious metals (and some agricultural commodities like Sugar too).