First, let me say I’ve been way too early on this call. I’ve been wrong and don’t deny it. You have to own up to mistakes, learn from them and be humble. Moving along, the precious metals sector is likely days or potentially hours away from a bottom. With respect to Gold, we are targeting $1180 or slightly below with $1080 as a worst-case scenario. The stocks are a bit more instructive for several reasons. First, they have a more consistent history and second, the stocks bottomed ahead of Gold (using daily closing prices) at the major lows in 2000-2001 and 2008. Using data from the Barron’s Gold Mining Index (BGMI) and the HUI Gold Bugs Index (HUI) we put together a chart of all of the major declines in gold stocks. We also annotated the ensuing recoveries. 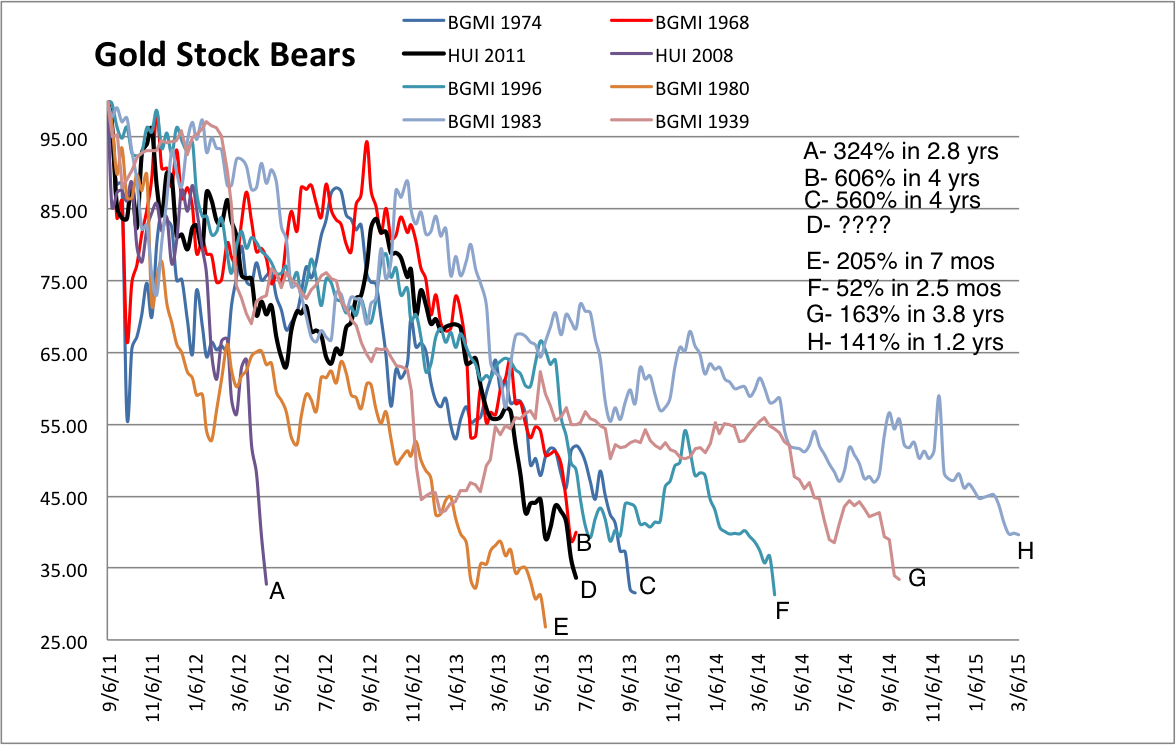 Downturns A, B and C occurred in a secular bull market while E occurred following the 1980 high. Note that the current downturn (D) is very similar to B,C, and E in terms of length and depth. A,B and C were followed by spectacular recoveries and even E resulted in a 205% rebound in only seven months. G and H also produced very strong rebounds. Also, Mebane Faber has provided some data that show how a particular market can perform after enduring 60% to 90% declines. Source Link.

Below we plot monthly charts of GDM (GDX), XAU and HUI. The sector appears to be one more or perhaps two more down days away from touching major, multi-year support. One learning point for me is that when a market is in a severe decline, you have to wait for major support. That matters far more than negative sentiment or the secular trend. 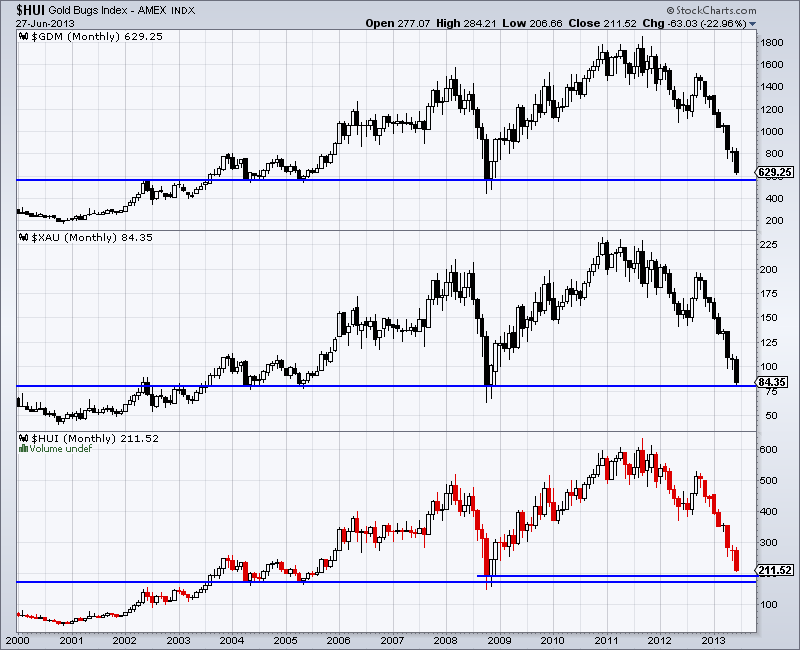 The mainstream continues to be bearish on this sector and in some places, misinformed about the sector in general. Josh Brown is a widely read mainstream blogger who also appears on CNBC daily. I happen to agree with a fair amount of what he writes and his style is refreshing. He’s also been bearish on the gold stocks for a while and I give him credit for that, while I became bullish way too early. A few days ago he posted some very negative thoughts on the sector following a television appearance by a gold fund manager who struggled to make a positive case for gold stocks. To be fair to the manager, one shouldn’t expect to find any in-depth or long-term actionable analysis on a show known as “Fast Money,” which is far more concerned about the next two days than the next two years.

Brown’s blog post not only was devoid of any real fact-based analysis but highlights how the mainstream continues to misunderstand precious metals. Given that he blogs, appears on tv daily and has to meet with clients, he may not have the time to do exhaustive historical research. Furthermore, I was quite surprised to see his post highlighted in Seeking Alpha as if it provided any worthwhile analysis.

He disputes the fact that Gold benefits from cracks in the financial system and asserts that nobody bought Gold when the cracks appeared. He goes on to say that if the stock market crashes, gold stocks crash also.

If one is focusing on a very tiny period, then this is true. However, the cracks actually appeared in early 2007 when Gold was trading in the mid $600s. It reached $1000 in February 2009 before the bear market in stocks ended. The gold stocks didn’t perform as well but they bottomed five months before the stock market and by late 2009 had rallied back to their pre-crisis highs. (They performed even better after 1929). And this is the entire sector. Most industry insiders say it is a terrible idea to buy the entire sector. Mainstream-oriented advisors like Brown play ETFs as they may not have the time to perform the research necessary to generate better returns. Furthermore, what is this obsession with such a small period of time? I don’t know of anyone buying precious metals just to cash in on a potential immediate move. They buy because of long-term trends.

Here is Brown’s biggest mistake. While gold stocks did crash in 1929 and 2007 (but quickly recovered in both cases), gold stocks can gain fantastically when the stock market is in a cyclical bear. The correlation between the two can take many different forms but when the two are negatively correlated it can be hugely positive for gold stocks. 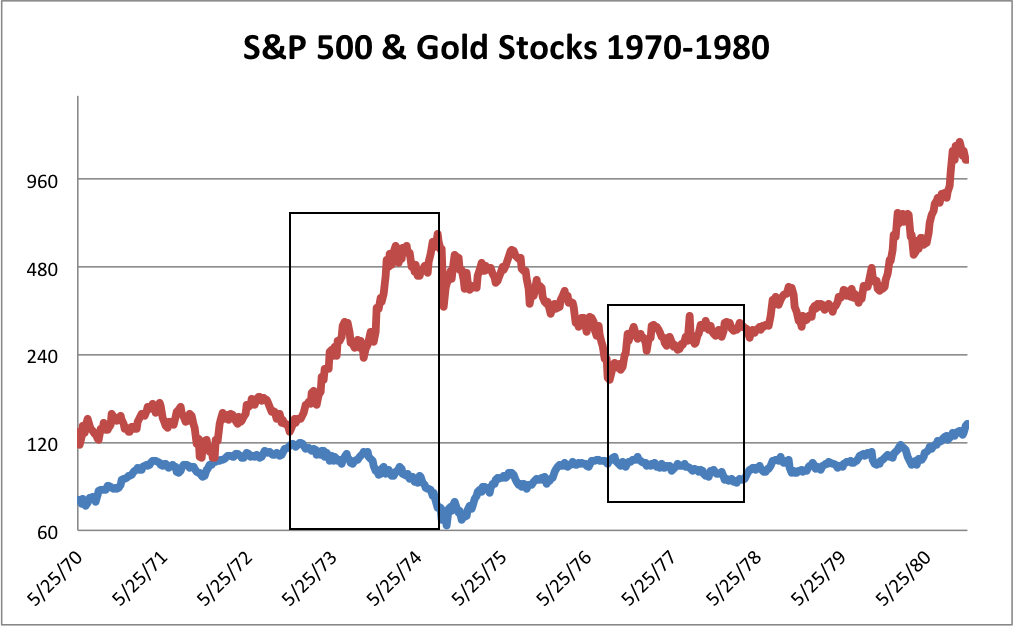 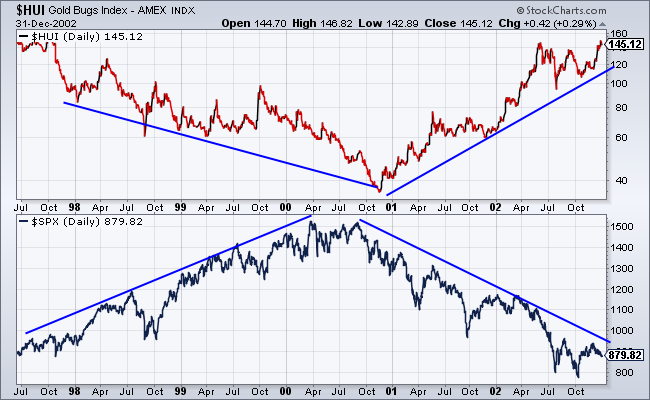 The game is up and all that’s left is denial what’s happening right in front of people’s faces. If your job is to run a gold fund though, what are you going to say? If you’re the strategist at a Canadian investment bank that’s doing gold miner financing and shit, what choice do you have but to be “constructive”? It’s, frankly, depressing. I hope for a huge bounce from the miners so that people who’ve made a big mistake can use that bounce to make some changes.

Had Brown studied this sector and its history (and he can quickly look at our first chart) he’d see that these types of declines are like clockwork and so too are the massive recoveries. In terms of the length and depth of this decline it is remarkably similar to both the declines that occurred within the 1960-1980 secular bull market. In terms of depth its nearly as much as the 2008 crash. Our first chart illustrates that this downturn is in-line with an overall secular bull market. It’s not the end, it’s just the start of the last run.

The game that is up or will be up shortly is the cyclical bear market in precious metals as well as the cyclical bull market in the S&P 500. When the S&P 500 and economy struggle it’s going to be glorious for precious metals. The authorities in the US and abroad will do everything they can to prevent another bear market and recession. The result will be a global currency crisis, higher inflation and stock markets won’t go up. Don’t think it can happen? You might want to review history and take a long view. Frankly, when Mom and Pop investor are stuck in stock funds for the next several years with barely any return and no exposure to precious metals- that will be depressing. I hope people don’t make that big mistake. If you’d be interested in our analysis on the companies poised to recover now and lead the next bull market, we invite you to learn more about our service.