Commodities have underperformed in the past year as the US economy gained traction and the need for inflationary and stimulative measures abated, though only temporarily. At the same time, Commodities had embarked on a tremendous advance and a pullback was to be expected. Interestingly, the past can tell us something about the future path of Commodities. The resource sector has been following a very similar path as the equity market did from 1987-1991. This comparison is one of several reasons why we expect commodities will make a major low within the next few months.

In the chart below we plot the S&P 500 and the Nasdaq with the Nasdaq/S&P ratio in the middle. Both markets made marginal highs several years after the 1987 crash and both markets corrected significantly in 1990. The Nasdaq’s correction was much deeper but it soon would begin a period of strong outperformance that lasted for nine years. 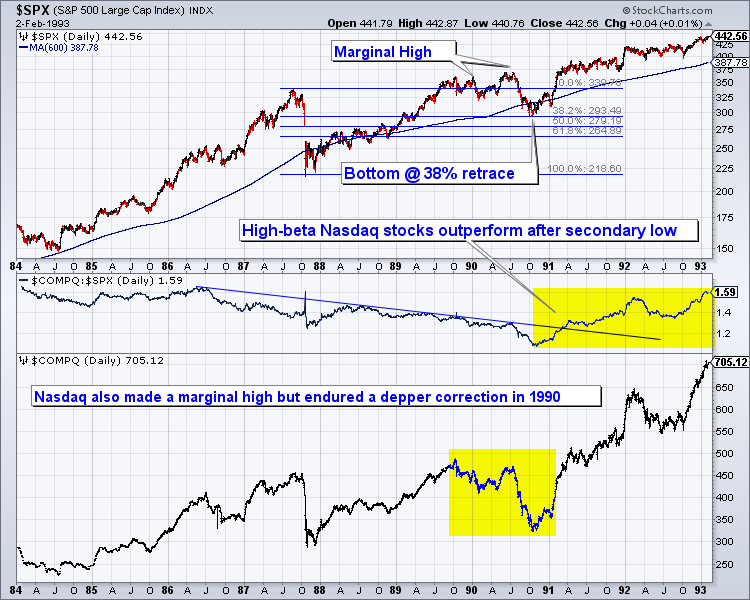 Presently, we some similarities. Commodities made a marginal high in 2011, several years after the 2008 crash. Now, Commodities are correcting. Will Commodities retrace most of their recovery (ala the Nasdaq) or will they endure something closer to the S&P? 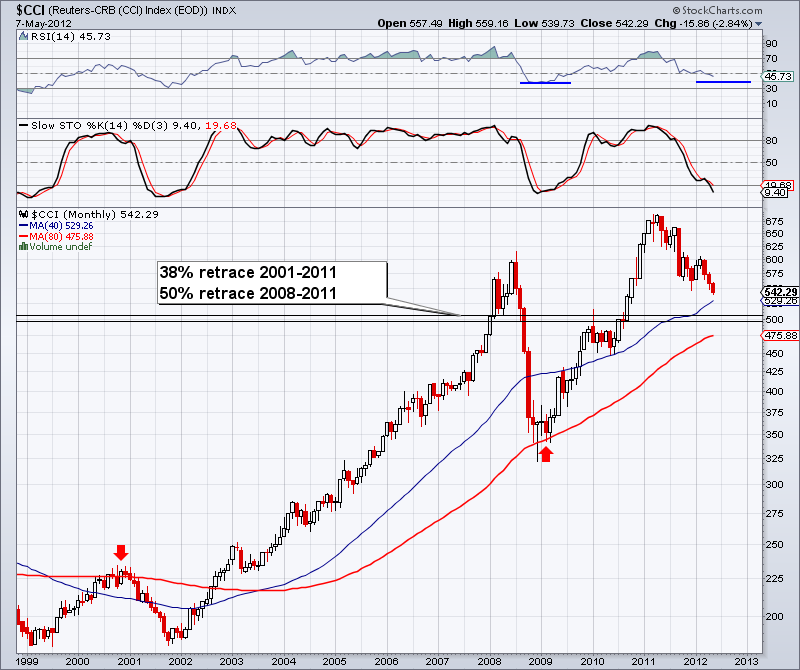 Sentiment indicators also suggest that commodities are near a major bottom. Below we show SentimenTrader.com’s Master COT Indicator. This indicator is an aggregate of speculative/commercial positions. Essentially, the higher the indicator the greater amount of speculative long positions. Currently, the Master COT is well below its 2008 and 2011 highs. From a contrarian standpoint, the Master COT is supportive of the bullish case. However, we’d note that the indicator would have to fall further to reach a true bearish extreme.

Our work leads us to believe that commodities are on the cusp of a major low. We personally see another 5-10% downside before the major low is reached. Our technical analysis and sentiment indicators support this view. Fundamentally, Europe is headed for recession while the US is certainly slowing down. Economic data is coming in worse than expected. A continuance of that combined with more problems in the Euro zone, while painful in the short-term will induce more action from the various central banks. This is what the Gold and commodity markets are waiting for and what will be the next trigger for the next cyclical bull market in the resource sector. Learn more about our premium service here. Keeping the Decline in Gold Stocks in Perspective