As the gold stocks continue to fall to new lows and struggle to find a bottom, it is important to keep things in perspective. Before we get to the visual comparison with the 1960s and 1970s, we want to touch on the reasons why the gold stocks have underperformed in recent months and years.

First, the sector had a terrific run that would have to be corrected. From late 2008 until the end of 2010, GDX advanced more than 4-fold from $15 to $64. Silver stocks, juniors and mid-tiers had a larger run that lasted nearly 30 months. It takes not months but quarters to correct that type of move. Moreover, GDX has yet to reach the 50% retracement at $41. A 38% or 50% retracement is routine. Furthermore, we’ve shown in recent writings that the current correction in percentage terms is in-line with corrections in past years.

A second reason for poor performance from gold stocks is the strong stock market, which provides competition. If conventional investments perform well then there is less mainstream demand for Gold and gold stocks. After the announcement of QE 2 in August 2010, the large gold stocks advanced for only four months before reaching a peak. Since the announcement, the S&P 500 is up more than 30%. The S&P 500 has had a great run in the past seven months while gold stocks have really struggled. The best general market environment for gold stocks is not one of extreme strength or weakness but one of slight strength or neutrality.

Third, mining is a difficult business in which operational difficulties are not random. Sure, energy costs and overall costs are higher but margins for the able producers are at record highs. The great companies are performing well in this environment, as they should be. The struggles of so many companies within a highly profitable environment is a testament to the overall difficulty of the mining business.

Below we plot the Barron’s Gold Mining Index (blue) and the current HUI Gold Bugs Index (HUI). We’ve touched on this in previous writings, but there are noticeable similarities. The HUI had a sharper initial correction but rebounded to marginal new highs. The HUI now appears on its way to forming its first major bottom since 2008. When the BGMI bottomed in late 1971 it had effectively made no progress in six years. The BGMI is currently only marginally above its peak in 2006. 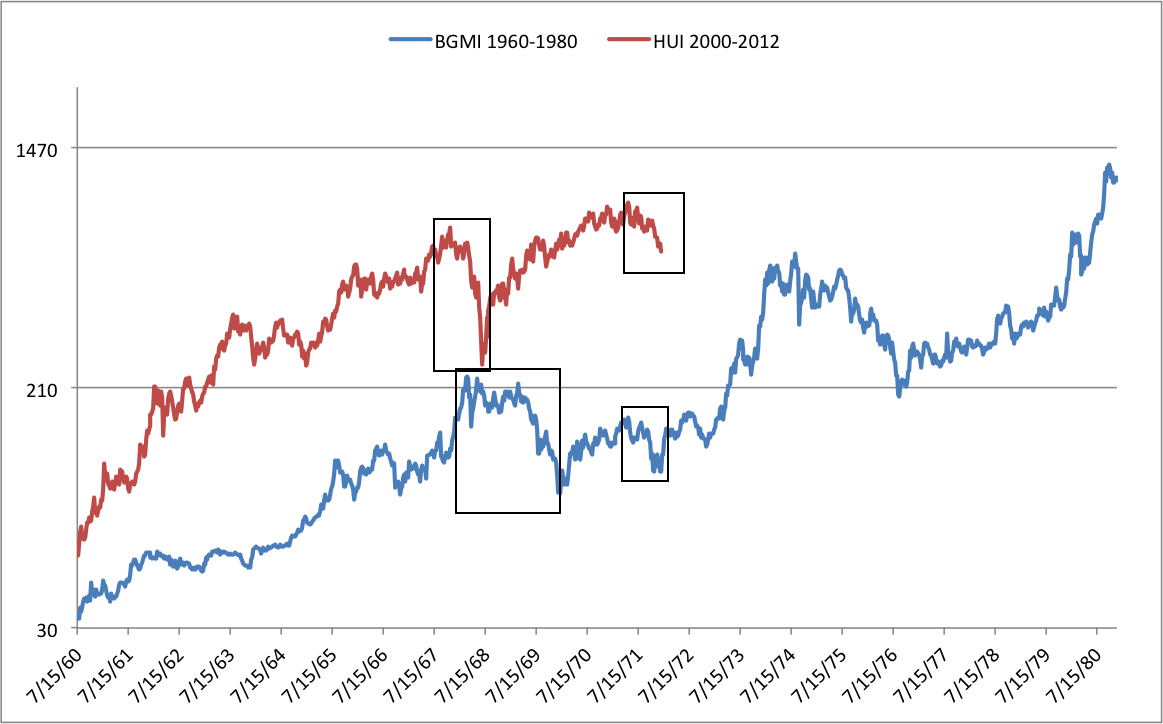 This chart is not to imply that the HUI will follow the exact same path. More so, it is to illustrate the similarities between both markets as they endured the wall of worry period. In previous writings we showed how other bull markets (Nasdaq, Japan) endured their own wall of worry periods before exploding to new highs and then higher highs. From its low in 1971, the BGMI would rise roughly 12 fold in the last nine years of its bull market.

With the current low valuations and extreme negative sentiment combined with the strengthening real price of Gold (implies future margin increases), we have little worry that this sector will explode in the coming years. The last six months have been a difficult period but it is closer to the end than the start of said period. With all of this in mind, it is wise to develop a game plan and a stock list. Scaling into positions (near support levels) over the next several months would be a wise move. For subscribers, we have updated our watch lists and prepared support levels to watch for a potential major bottom. If you’d be interested in professional guidance then we invite you to learn more about our service. Commodities are Nearing a Major Low