Vancouver, B.C… Corvus Gold Inc. (“Corvus” or the “Company”) – (TSX: KOR, OTCQX: CORVF) announces new results from the 2014 Phase One drill campaign at the North Bullfrog Project in Nevada.  Assay results include the full intercept of the previously reported hole NB-14-378 as well as two recently drilled holes (Table 1).  Hole NB-14-377, in the Yellowjacket deposit, intersected the Josh Vein 150 metres down dip from the surface a returning 17 metres @ 2 g/t gold and 8 g/t silver establishing the down dip continuity (Figure 1).  In addition, hole NB-14-379 tested the top of the new West Vein zone 20 meters below the surface, and returned typical high level mineralization with a 1.1 metre wide vein @ 2.4 g/t gold and 7.8 g/t silver within a broader zone of low-grade mineralization.

Full assay results have now been received from hole NB-14-378 (initially reported in NR-14-08, March 3, 2014) which intersects the West Vein about 65 metres down dip from hole NB-14-379.  The hole returned a vein intersection of 9.2 metres @ 18 g/t gold and 260 g/t silver, thereby establishing the elevation control on the top of the high grade veins in the greater Yellowjacket – West Vein area (Figure 2).  This same elevation control may be reflected in hole NB-14-380 (initially reported in NR-14-09, March 13, 2014) with an upper zone, at 50 metres down-hole depth, of 3.6 metres of 4.19 g/t gold and 150 g/t silver and a lower zone, about 40 metres down-hole deeper, of 4.8 metres @ 13.8 g/t gold and 243 g/t silver.  The assays from the remainder of this hole, which include the areas between and surrounding the veins, are pending.  As the Phase One program continues, drilling is intended to outline the expansion potential of the new West Vein discovery and conduct initial testing of the northern and southern extension potential, as well as test the depth extent, of the Yellowjacket deposit.

An additional five holes have now been completed in the West Vein target area and visible gold and silver (acanthite) associated with quartz veining has been observed in a number of intervals.  The most productive zone for thick quartz vein development in the West Vein target currently appears to start below 40 metres down-hole in depth and has only been tested to 100 metres down-hole depth at this time (Figure 2).  Continuity of this new vein system has now been established for over 100 metres in strike length and remains open (Figure 1).  The Company believes that the West Vein will ultimately intersect the Main Josh Vein towards the North and South at different depths.

Jeff Pontius, Corvus CEO, stated “The extension of the main Josh Vein to the south and the development of a large new high-grade quartz vein system in the West Vein target bode well for the potential expansion of the Yellowjacket high-grade resource.  As we drill these priority high-grade targets we continue to find new and exciting potential for an expanding system.  Of particular interest is following the Yellowjacket system at depth and exploring for other parallel systems to the west like the new West Vein discovery.  The robust nature of the current estimated resource in a low gold price environment and its leverage to higher prices has defined North Bullfrog as a significant new Nevada gold discovery with attractive exploration potential.”

*The veining and stockwork veining have been defined by geological observation of the percentage of veining in the interval, e.g. >5% quartz vein is peripheral stockwork and >15% quartz veining is stockwork. No cut-off grade has been applied.

The Yellowjacket Vein Zone at North Bullfrog is currently defined by the Josh Vein on the west and the Liberator Fault on the east (Figure 1).  The interaction of these two faults has created a large broken zone which contains major veins, such as the Josh Vein, and broad zones of stockwork mineralization.  The West Vein strand delineated by 2014 drilling represents a new hangingwall splay off the main Josh Vein Fault and also carries substantial high-grade gold and silver mineralization with similar resource potential as it extends to the south.

Drilling now indicates that large northeast faults such as the NE30 and NE50 faults (Figure 1) do not cut off the Josh Vein Fault system but enhance it as a host for high-grade gold and silver veins.  This new information indicates that there is significant potential for mineralization along the northeast structures themselves as they go across the main low-grade deposit to the west.  In addition the wedge-shaped zone between the Josh Vein and the Liberator Fault has proven to have many more mineralized structures than previously thought, thereby enhancing the overall potential for additional high-grade mineralization (Figure 2).

The 5,000 metre Phase One drilling program at North Bullfrog will continue to focus on delineating the limits of the Yellowjacket system.  In the planned 15,000 metre Phase Two program, additional core rigs will be added to conduct resource definition drilling and continue with the District-wide exploration for other high-grade vein systems.

Figure 1: Location of 2014 drillholes at Yellowjacket.  Assays from the holes indicated in fuscia are reported in this release.  Green traces are from holes with pending assays.  The location of the section in Figure 2 is indicated. 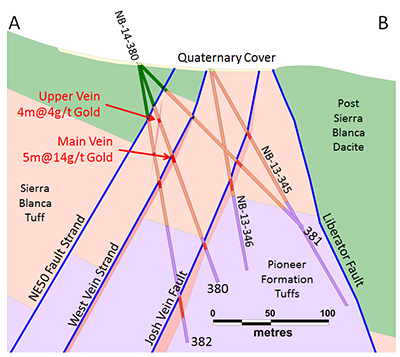 Corvus controls 100% of its North Bullfrog Project, which covers approximately 68 km² in southern Nevada just north of the historic Bullfrog gold mine formerly operated by Barrick Gold Corp.  The property package is made up of a number of private mineral leases of patented federal mining claims and 758 federal unpatented mining claims.  The project has excellent infrastructure, being adjacent to a major highway and power corridor as well as a large water right.

An Update on Gold