An additional five holes have now been completed in the West Vein target with results pending.  The West Vein zone has now been tracked for 125 metres along strike and to a down dip depth of nearly 150 metres.  The West Vein system appears to merge with the Josh Vein to the south near drill hole NB-12-184 (Figure 1).  The drill has now been moved to the north to continue delineating the northern extent of the Yellowjacket Deposit’s main Josh Vein system and will eventually return to the West & Josh Vein area to continue exploring the system to the south and at depth.

*The veining and stockwork veining have been defined by geological observation of the percentage of veining in the interval, e.g. significant concentrations of veining in the immediate hangingwall and footwall of a significant vein.  Outside of the immediate hangingwall and footwall zones a cutoff of 0.3 g/t gold equivalent has been used assuming a 1:55 price ratio of gold to silver.  Up to 3 metres of internal waste has been carried locally.

The Yellowjacket Vein Zone at North Bullfrog is currently defined by the Josh-West Vein structural zone on the west and the Liberator Fault to the east (Figure 1).  The interaction of these two faults has created a large broken zone which contains several quartz veined structures, such as the Josh Vein, and broad zones of stockwork mineralization.  The West Vein strand delineated by 2014 drilling represents a new hangingwall splay off the main Josh Vein Fault that contains gold and silver mineralization to the main Josh Vein.

Drilling now indicates that large northeast faults such as the NE30 and NE50 faults (Figure 1) do not cut off the Josh Vein Fault system but enhance it as a host for vein development and have emerged as new exploration targets (Figure 2).

The 5,000 metre Phase One drilling program at North Bullfrog will continue to focus on delineating the Yellowjacket system.  In the planned 15,000 metre Phase Two program, additional core rigs will be added to conduct resource definition drilling and continue with the District-wide exploration for other vein systems. 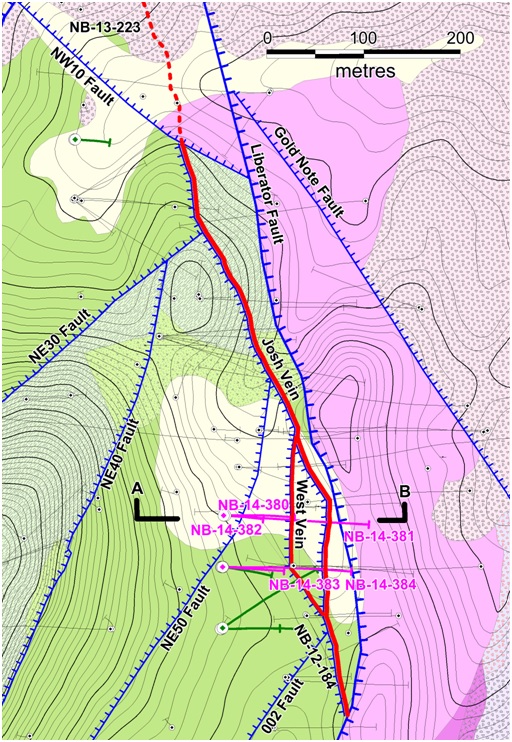 Figure 1: Location of 2014 drill holes at Yellowjacket.  Assays from the holes indicated in fuscia are reported in this release.  Green traces are from holes with pending assays.  The location of the section in Figure 2 is indicated.

Corvus controls 100% of its North Bullfrog Project, which covers approximately 68 km² in southern Nevada.  The property package is made up of a number of private mineral leases of patented federal mining claims and 758 federal unpatented mining claims.  The project has excellent infrastructure, being adjacent to a major highway and power corridor as well as a large water right.

Corvus Gold Inc. is a North American gold exploration company, which is focused on advancing its 100% controlled Nevada, North Bullfrog project towards a potential development decision.  In addition, the Company controls a number of other North American exploration properties representing a spectrum of gold, silver and copper projects. May Decline in Gold and Silver Stocks Would Create Opportunity