Vancouver, B.C. – Corvus Gold Inc. (“Corvus” or the “Company”) – (TSX: KOR, OTCQX: CORVF) announces the filing of an independent NI-43-101 technical report on the new resource calculation for its 100% owned North Bullfrog Project, Nevada.  This independent resource calculation incorporates new drilling conducted in 2012 and 2013 which was used to calculate a new mineralization inventory for the Yellowjacket and Sierra Blanca portions of the project.  However, in the technical report the entire project Mineral Resource estimate has been updated (Table 1) using Corvus Gold’s new reporting criteria which only reflects that portion of the mineralization inventory which falls within a conceptual WhittleTM pit shell and would be scheduled for processing as defined at a US $1300 gold price.  The WhittleTM pit optimization process is not a full economic analysis but it does indicate what portions of the mineralization inventory might have reasonable prospects for economic extraction by open pit mining given assumed mining, processing, administrative costs and metal recovery at a specific gold price (Table 2).

*Analysis assumes a fixed ratio of the gold to silver prices of 59
**Breakeven grade derived from Whittle input parameters at US$1,300/oz gold price and Silver:Gold ratio of 59

Jeff Pontius, Corvus CEO, stated “The new initial Yellowjacket resource linked with our ongoing exploration success on new high-grade vein system discoveries indicates that there is significant potential to grow this deposit.  Our initial drilling focus remains on the continued expansion of the Yellowjacket Deposit along strike and at depth as well as other new parallel and internal systems like the West Vein.  In addition, we plan to drill other new, large untested systems to the west of Yellowjacket and in the District as a whole in the coming months with the aim of further unlocking the potential of this new Nevada high-grade gold-silver discovery.

Corvus Gold and its independent qualified persons (QP’s) as defined by NI 43-101 have taken a new approach to their estimate of the mineral resource at North Bullfrog with the publication of the Report.  This new standard limits the estimated mineral resource to that portion of the geostatistically modeled mineralization inventory which is contained within a conceptual WhittleTM pit and scheduled to processing at a US $1,300 gold price. The WhittleTM optimization process considers three parameters simultaneously, which are: the value of recoverable metal in each block in the mineral inventory; the costs of mining, processing and administration for that block; and the realistic geometrical development of the open pit.  If the value exceeds the costs and the integrity of the pit is maintained then each block within the pit shell is scheduled either to the process stream or to waste.

Mr. Giroux produced the updated estimate of the North Bullfrog mineralization inventory (effective as at March 25, 2014), based on resource drilling in the Sierra Blanca and Yellowjacket areas of the North Bullfrog Project that occurred in 2012 and 2013 (Figure 1).  The new mineral inventory calculation includes an additional 16,209 samples derived from 111 holes totalling 23,020 metres with an average depth of 207 metres.  The inventory also incorporates an updated geologic model and additional rock density data.  Previous mineralization inventory estimates from the Jolly Jane, and Mayflower deposits were not updated because no additional drilling has been conducted in those areas (Figure 1).

To estimate the mineral resource for North Bullfrog, Mr. Wilson utilized the block models of mineralization prepared by Mr. Giroux as part of the input data for his estimation of that portion of the mineral inventory that was contained within the US $1300 open pit shell defined by the Lerchs-Grossman algorithm used in the WhittleTM Program, and which would be scheduled to be sent to a processing facility.

Constraints on the Revised Mineral Inventory and Resource

The structurally controlled mineralization in the Yellowjacket Zone was modelled separately in several geologically defined domains to prevent smearing of high-grade mineralization into the surrounding blocks.  For the purposes of estimating the mineral resource, the different Yellowjacket domains have been combined because of the geological similarities.  Based on the current metallurgical data on Yellowjacket mineralization, it has been assumed that this material will be processed through a separate milling circuit and thus carries different processing costs and recoveries resulting in cut-off grades different than the heap leach processing.  These additional costs and recoveries have been accounted for in the WhittleTM pit analysis. 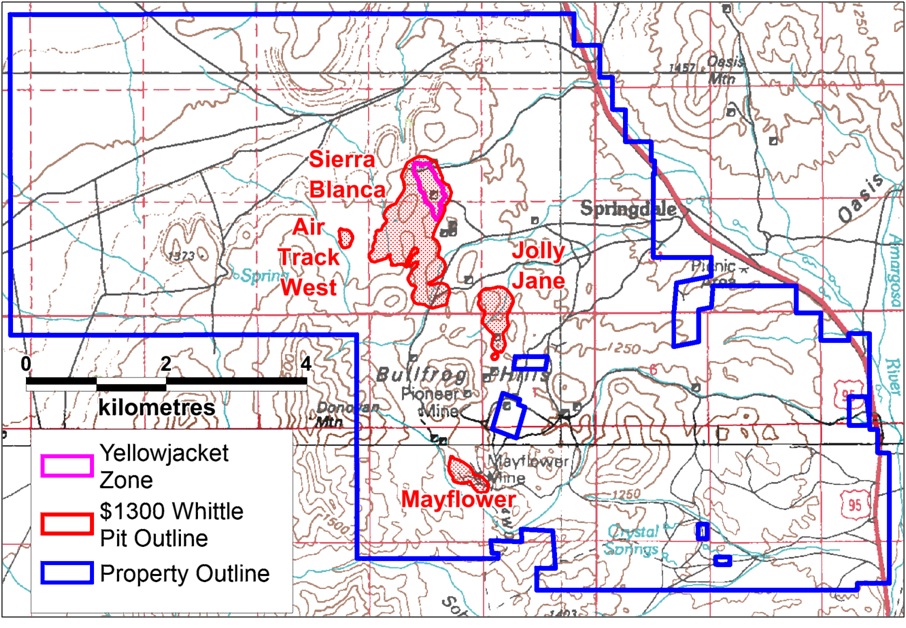 The Yellowjacket estimated resource area is immediately east of the Sierra Blanca deposit and was modeled as a specific zone within the greater Sierra Blanca deposit.  The zone has a North-Northwest trend and is currently defined by the Josh Vein on the west and the Liberator Fault on the east.  This zone includes vein and stockwork vein type mineralization controlled by the interaction of the two structures.  While the main vein drilled to date has a NNW trend, the step over structures between the main faults appears to have a north-easterly trend.  Although the bulk of the indicated mineralization within the current resource estimate is hosted by one vein system, other veins have been intersected by the drilling and will be further explored with the ongoing exploration program.

Corvus controls 100% of its North Bullfrog Project, which covers approximately 68 km² in southern Nevada just north of the historic Bullfrog gold mine formerly operated by Barrick Gold Corp.  The property package, shown in Figure 2, is made up of a number of private mineral leases of patented federal lode mining claims and 758 federal unpatented lode mining claims.  The Project has excellent infrastructure, being adjacent to a major highway and power corridor.

Mr. Scott E. Wilson, SME, President of Metal Mining Consultants Inc., is an independent consulting geologist specializing in mineral reserve and resource calculation reporting, mining project analysis and due diligence evaluations.  He is acting as the Qualified Person, as defined in NI 43-101, for the overall technical report, and specifically for the Mineral Resource Estimate (other than the estimate of the North Bullfrog mineralization inventory).  Mr. Wilson has over 23 years experience in surface mining and is a Registered Member of the Society of Mining, Metallurgy and Exploration.  Mr. Wilson and Metal Mining Consultants, Inc. are independent of the Company under NI 43-101.

Mr. Gary Giroux, M.Sc., P. Eng (B.C.), a consulting geological engineer employed by Giroux Consultants Ltd., has acted as the Qualified Person, as defined in NI 43-101, for the estimate of the North Bullfrog mineralization inventory.  He has over 30 years of experience in all stages of mineral exploration, development and production.  Mr. Giroux specializes in computer applications in ore reserve estimation, and has consulted both nationally and internationally in this field.  He has authored many papers on geostatistics and ore reserve estimation and has practiced as a Geological Engineer since 1970 and provided geostatistical services to the industry since 1976.  Both Mr. Giroux and Giroux Consultants Ltd. are independent of the Company under NI 43-101.

Mr. Herbert Osborne, SME, a consulting metallurgist, has acted as the Qualified Person, as defined by NI 43-101, for evaluation of the metallurgical testing data.  He has over 50 years of experience in mineral process design and operations.  He is a registered Member of the Society of Mining, Metallurgy and Exploration (SME Member No. 2430050 RM).  Mr. Osborne is independent of the Company under NI 43-101.