Hole NB-13-241 on the northern end of the Sierra Blanca ridge encountered over 180 metres of mineralization in two intervals (Table 1).  Hole NB-13-243 encountered 90 metres of mineralization in two intervals.  In all of these holes, oxidation extends to depths in excess of 300 metres, which is significantly deeper than previous estimates.  These new results confirm that thickening zones of oxide mineralization extend from the previously defined currently proposed pit area to the new Yellowjacket high-grade zone, as well as defining new zones of higher grade mineralization to the west.

This data, together with the previously reported hole NB-13-238 (12 metres @ 0.8 g/t gold) (see NR13-23, October 2, 2013) on the western flank of the ridge indicate that there is potential to develop multiple Yellowjacket style high-grade zones to the west that could enhance the overall grade and potential project economics of the deposit.

Jeff Pontius, Chief Executive Officer, stated: “These new drill results continue to expand and enhance the potential of the Sierra Blanca – Yellowjacket deposit.  The increasing depth of oxidation and the definition of more high-grade, oxide vein potential hundreds of metres to the west of Yellowjacket could add significant potential to expand the existing resource.  We are excited to begin the follow-up core drilling on these new vein discoveries and continue to expand the Yellowjacket system to the west.  As we have seen from our ongoing drilling, the scale of the North Bullfrog system continues to grow, demonstrating significant potential to develop into a major new Nevada gold system.”

*Intercepts calculated with 0.1g/t gold cutoff and up to 3 metres of internal waste.  Assuming that the mineralization is roughly stratiform in character, the intercepts are approximately true thickness.  All holes are vertical. 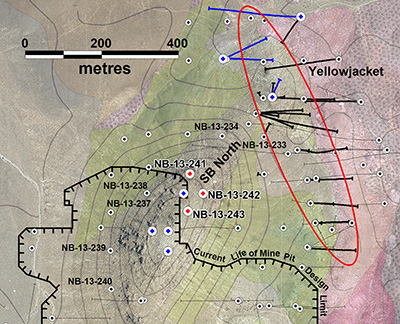 Corvus controls 100% of its North Bullfrog Project, which covers approximately 70 km² in southern Nevada just north of the historic Bullfrog gold mine formerly operated by Barrick Gold Corporation.  The property package is made up of a number of leased patented federal mining claims and 758 federal unpatented mining claims.  The project has excellent infrastructure, being adjacent to a major highway and power corridor.