The mean reversion rally has stalled again, apart from the powerful rise in Agricultural prices, despite an abundance of bears calling for lower prices. Major commodities have found resistance levels with Crude at $90, Gold at $1640 and Wheat at $8. US Dollar made a new closing high on Friday, while the Long Bond remains in a tight trading range. The bottom line still remains the same: investors are fearful of a disorderly default in the Eurozone and intense funding pressure on large economies like Spain and Italy. At the same time, Asia and especially China is slowing down meaningfully. At present, bearish trades remain slightly crowded, but not as much as they were at the start of the month.
Global Macro 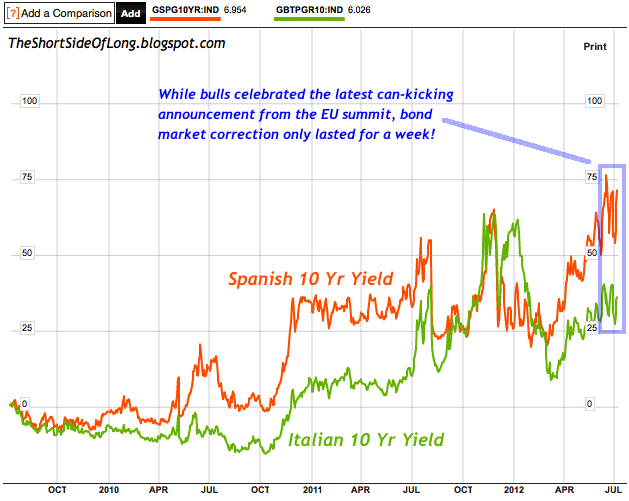 It has only been a week since the last EU summit, which according to many media outlets was a “major break through”. Furthermore, I was so surprised by many traders which I follow, who claimed that the bottom for risk assets was in and the ECB was about to start printing money. Well, while many were easily fouled by Eurocrats, those who follow the credit markets knew that another can-kicking exercise just won’t work. The European bond markets did not buy a word of it… 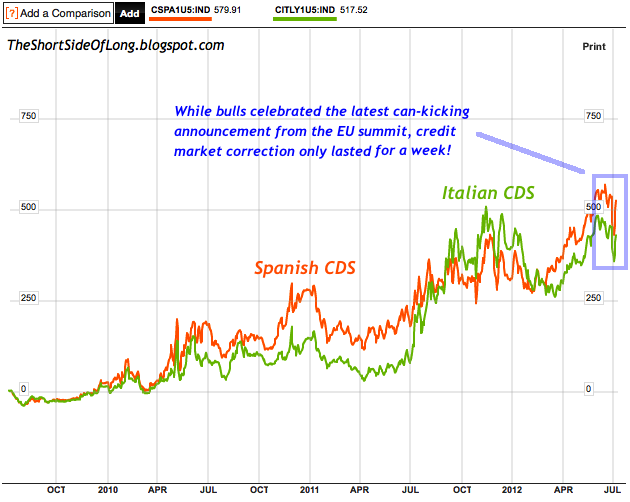 … and neither did the European Credit Default Swaps markets, used to insure investors from a potential default in Italian and Spanish debt markets. Spanish yields on the 10 Yr are now back up to all important 7% line in the sand, while the CDS are once again close to making all time new highs. What was all the fuss about? Honestly, did you actually think Eurocrats solved anything by bailing out indebted banks with more debt? The overall risk on rally lasted for a couple of weeks to be quite honest. It was only a week ago that I wrote:

“This pretty much means more of the same, ever since this crisis started and Greece was first bailed out in middle of June 2010. Solving a debt crisis with more debt through bailouts does not work. Furthermore, every relief rally connected to bailouts seems to last for a shorter time duration and accomplishes less gains in percentage terms.”

If you the Eurocrats wanted to solve this crisis properly, they should have let Greece default in early 2010, when the problem first came to the forefront of global crisis. That would have sent a clear message to the rest of the peripheral countries that no bailouts will occur and no free lunch will be given. Instead, politicians are only ever interested in getting reelected and postponing debt problems with more debt. Now we have an even bigger crisis on our hands and credit markets have had enough of can kicking! 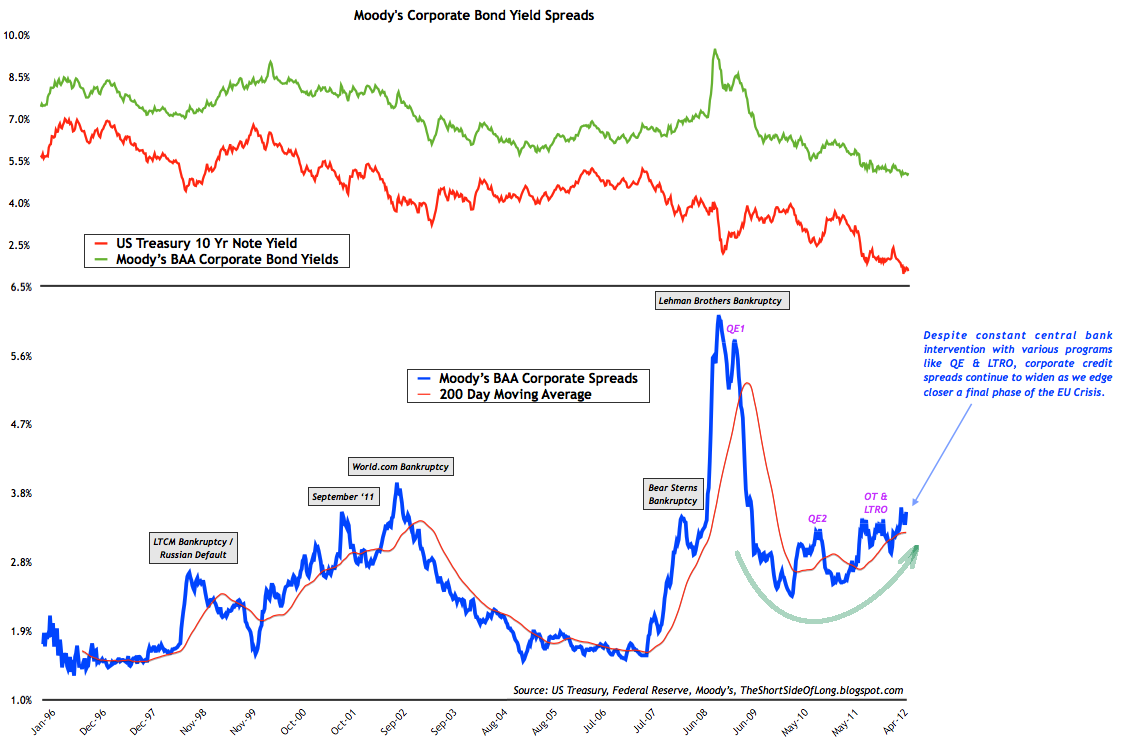 In the US, corporate bond market credit spreads are widening to three year highs as we can see in the chart above. There is a clear risk-off uptrend in place and credit spreads are above the 200 day MA. Furthermore, a lot of investors believe that central banks won’t let any type of a default occur and all will be well in the future. What a load of you know what. Chart above shows that QE2, Operation Twist and LTRO have not stopped credit spreads from widening, so I can safely assume that QE3 won’t do too much either. We are moving towards the final phase of the EU Crisis and I am expecting a corporate spike in spreads in coming quarters. Updated recently in my trading dairy (below), I am now short Junk Bonds. 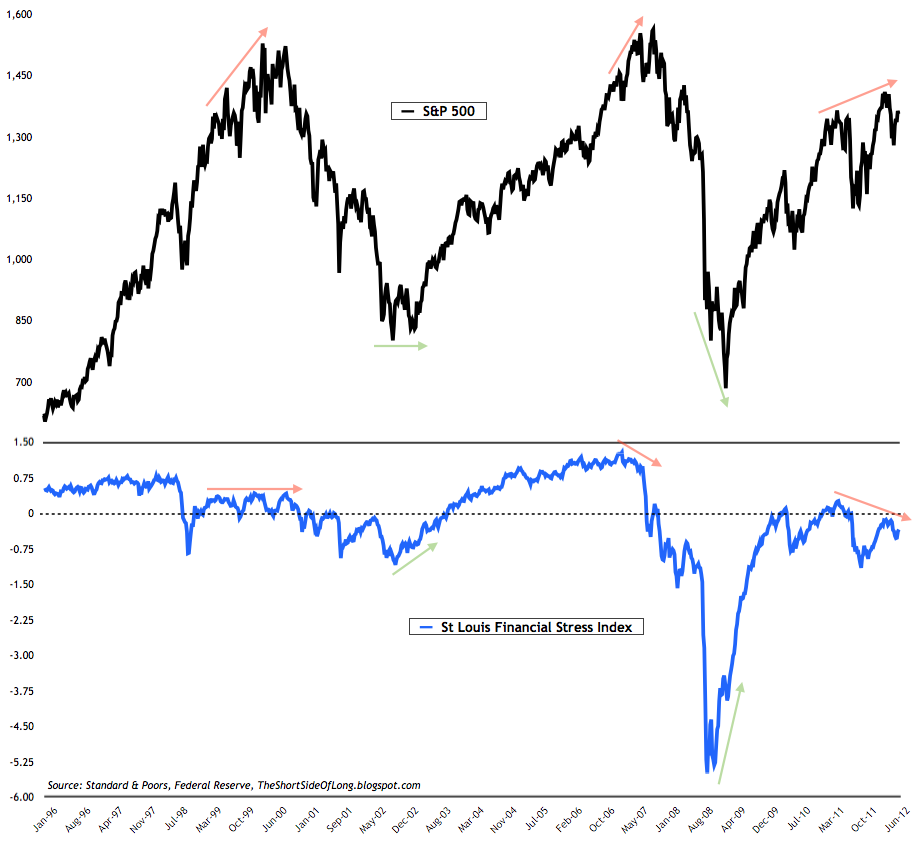 Be it globally or locally in the US, there will be on de-coupling. Financial Stress Conditions are deteriorating as we can see chart above. There is a powerful negative divergence in progress between the credit markets and equity markets right now. One should not take this message with a grain of salt, as we saw similar occurrence in 2000 top as well as the 2007 top. 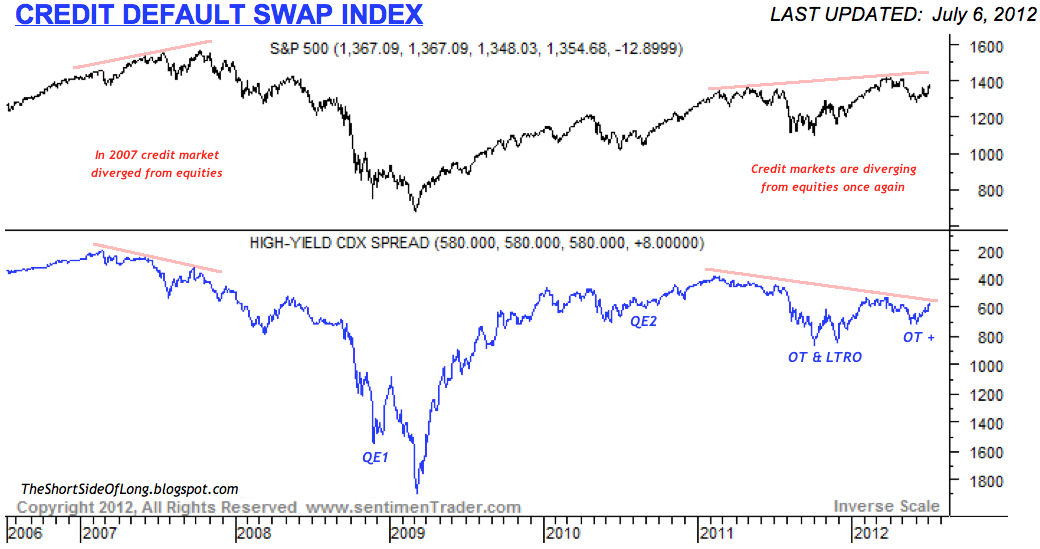 Credit Default Swaps on US corporations also speak of a completely different message to what the equity markets are saying and yet majority of investors are not listening. The chart below shows the majority of investors would not even think twice about calling this a market top or turning bearish on risk assets right now. On the other hand, I am extremely worried about the way final phase of the EU crisis will play out in coming quarters. 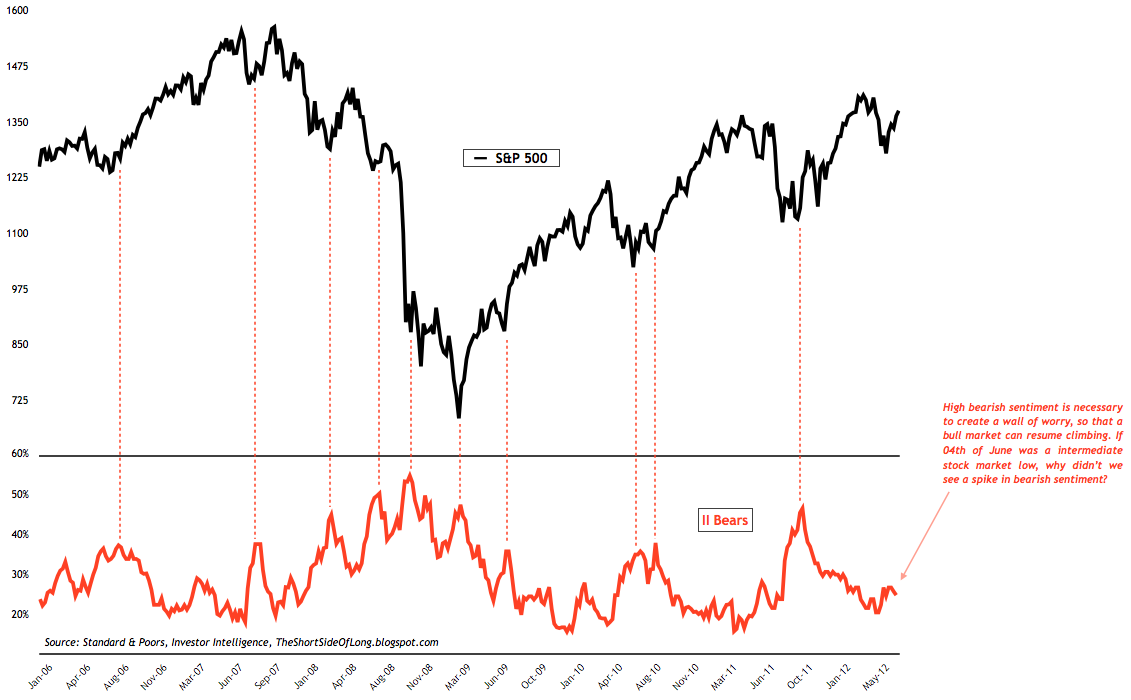 In a simple and straight forward summary, until I see credit markets moving positively in sync with the risk assets, the recent rally is more of a selling opportunity then anything else. In all honesty, I am very sceptical right now. Only a major Federal Reserve printing intervention would possibly change my mind in short to media term.