What the deflationists fail to acknowledge is that in a purely fiat monetary system deflation is a choice not an inevitability. To put it in simple terms, if a government is willing to sacrifice its currency there is absolutely no way deflation can take hold in a modern monetary system.

It doesn’t matter how large the debt contraction is, 10 trillion, 100 or 1000 trillion, any government with a purely fiat currency can, with the stroke of a computer key, print enough money to wipe out the debt. Granted they will destroy the currency by doing so, but at some point we are going to be faced with the choice of print or deflate. I have little doubt Bernanke will choose to throw the dollar on the sacrificial alter.

Consumer credit isn’t growing you say. Consumers are deleveraging. Not possible to have inflation unless consumers are borrowing and wages are rising. Pure nonsense!

Let me point out one indisputable fact and then I will delve deeper into the deflation/inflation argument and where investors need to put their capital to protect themselves from the coming inflationary storm. In a purely fiat monetary system a government that is willing to sacrifice its currency can, if they so desire, print enough money to mail every man, woman, and child a check for $1,000, $100,000 or a million dollars. To do so would halt any deflationary force right in its tracks. It would for most practical purposes wipe out all consumer debt. Impossible you say? Well the US has already done it twice. (It was called a tax rebate, in case you forgot.)

Here’s the thing, where the inflationary forces show up is determined by who gets first use of the money. So far that has been the banking system. Through the myriad bailout programs the Fed has created money out of thin air and forced into the insolvent financial system. That has resulted in selective inflationary forces being unleashed. Instead of loaning credit to consumers or businesses who don’t really want it, the financial system has plowed the money back into financial marketss. It’s the reason the stock market rallied 80% despite flawed fundamentals. It’s why oil rallied from $35 to over $80 despite impaired fundamentals. It’s why gold is threatening to break out again to new historic highs.

If instead of forcing the liquidity into the financial system it had instead been mailed to the average consumer, we would now be seeing real estate prices rising rapidly again, food prices and gasoline would be going through the roof. Wages would be rising out of control.

Where inflation shows up is a direct result of who gets first use of the freshly minted dollars. I can assure you we don’t have an impending deflation problem; we have a rapidly approaching inflation problem and currency crisis.

I’ve said for a long time now that eventually the market is going to make Bernanke pay a terrible price for his insane monetary policy. That price is going to be a currency crisis in the dollar and I think it’s already begun.

While everyone was busy watching the Euro crack during the first part of this year what no one foresaw was that eventually the cancer that began in Europe would at some point spread into the dollar.  It began 3 months, ago although no one has noticed yet.

Next I’m going to illustrate the long term cyclical nature of the dollar as the cycles are now lining up perfectly to bring on a major currency crisis in the US dollar, much worse than what just transpired in the Euro.

First let me show you a chart of the largest cycle, the three year cycle. 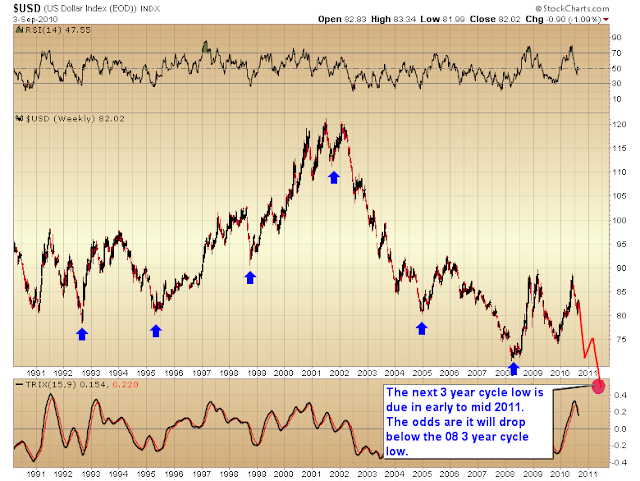 I’ve marked the last six 3 year cycle lows. These have tended to bottom about every 3 to 3 1/2 years with most running 3 years and 3 months. The consideration here is that the next major three year cycle low is due next year sometime around the March to June time frame.

As they say, the doody is going to hit the fan when the dollar moves down into this major cycle low, and Bernanke’s foolish attempt to print away the credit crisis is going to blow up in our face. By spring of next year we are going to be mired in a full-fledged dollar collapse.

The first warning is going to come when the dollar breaks back below 80. That will signal that the current intermediate cycle has failed. As soon as that happens we can close the door on the dollar.

We should first see a test of the all time lows by late this year when the next larger yearly cycle is due to bottom. After that we should have one more leg down into late spring or early summer that I expect will send the dollar to new all time lows 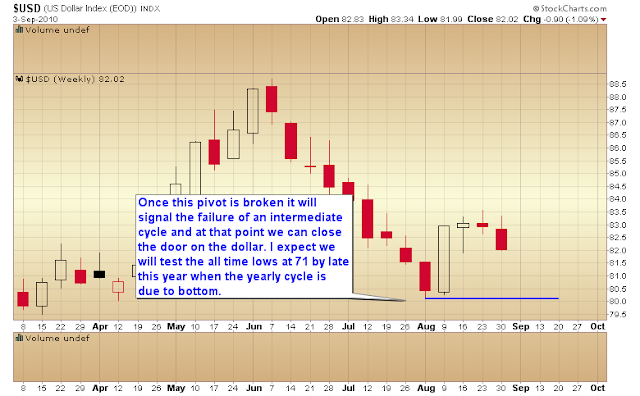 The only way to abort this from happening is for Bernanke to immediately start withdrawing massive amounts of liquidity from the market. That won’t stop the 3 year cycle from coming but we might have hope that the dollar could hold above the all time lows and we might avert or at least reduce the damage that will be caused by the impending currency collapse.

I can assure you he will do no such thing though. For one he has no idea the crisis is brewing. (This is the same man who assured us in ’07 that the credit problems were contained in the sub-prime markets and in ’06 that real estate was not in a bubble.)

And second, if he were to withdraw liquidity the country, and world, would quickly sink back into recession and then depression. No, I don’t think we have to worry about Uncle Ben turning off the presses.

So what should investors do to prepare themselves for the approaching conflagration? They must be invested in real stuff, commodities. There is a reason virtually the entire commodity complex was showing relative strength as the market put in the intermediate cycle low in early July. Smart money was and still is positioning to weather the coming storm.

I would point out that the beginning phase of the crisis isn’t going to feel like a crisis at all. A falling dollar will act to support all asset prices. We may even see nominal new highs in the stock market.

But eventually too much of a good thing will turn deadly and the true scope of the mess we are in will dawn on the market. At that point the collapsing dollar will no longer support stocks and we can expect the market to roll over and begin the next leg down in the ongoing secular bear market. Unlike stocks, commodities will thrive in a currency crisis with one in particular shining above all the rest.

That one of course is the only remaining secular bull market…Gold!

For those of you still on the fence I’m going to once again try to entice you onto the bull. I have unlocked last week’s weekend report. Click here to go to the premium website. The August 28th weekend report has been unlocked.

This should be long enough to get investors through the current C-wave advance, avoid the D-wave that will follow it, and get you back on board in time for the next A-wave rally.