In the modern fiat world, a deflationary-style stock market collapse isn’t supposed to happen. And yet that is exactly what Greece has already experienced and I don’t think it’s over yet. Here’s a modified chart any real bear has seen before: the first half of the 1929-1932 Dow Jones Industrial Average stock market bear, which saw a total loss from top to bottom of 89% (chart stolen from chartsrus.com, a great site, and modified): 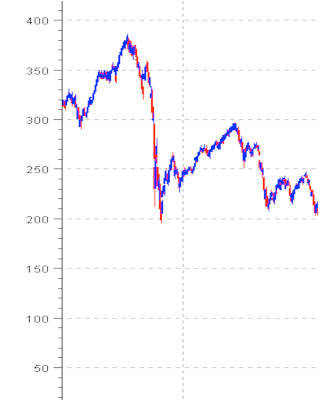 This isn’t the whole bear market – the eventual bottom in the Dow was 40 in 1932, and the above chart only goes thru part of 1930. Now, here’s the rhyme: a chart of the Greek stock market using the ATG share index over the past 5 years (monthly candlestick plot using a linear scale): 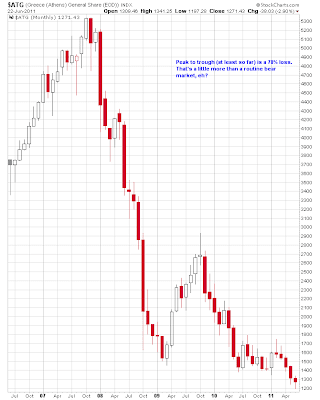 The Greek stock market is going to be ground further into the dirt. They are also likely headed for an 89% loss from the peak in late 2007. Why? Simple. The Euro currency is acting as a deflationary straight jacket, strangling the over-indebted Greek nation. As weak and flawed as the Euro currency is, it is too strong for Greece. If Greece doesn’t leave the Euro, their deflationary spiral will continue.

It is with great interest that I read a recent report of Greek people raiding their banks for cash and many subsequently using that cash to buy Gold. One of the hallmarks of a deflationary collapse is bank runs. Cash under the mattress and physical Gold are the items of choice in such a scenario, as you never know when a bank holiday will strike. And because you can guarantee that apparatchiks will do the exact wrong thing in this scenario and find a way to devalue and/or confiscate money held in the banking system come hook or crook, I’ll take Gold over paper in such a scenario.

This is the real secret behind the U.S. deflationary collapse in the 1930s that revisionist history conveniently fails to mention. People wanted the U.S. Dollar because it was almost the only major currency that remained backed by Gold once Britain started the wave of European countries leaving their respective Gold standards. Because the U.S. remained on a “hard” money system (until 1933-34) that allowed free convertibility of paper currency into Gold, the deflationary forces in the U.S. were overwhelming. People wanted Gold, not a piece of paper with a pending broken promise written on it.

Greek Gold demand is at historical extremes precisely because the country is in the midst of a deflationary collapse. It is not the end of the world and things will eventually turn around, but holding Gold in the mean time is the right thing to do for Greek savers. Eventually, the Euro will massively devalue to accommodate the so-called “PIIGS” economies and/or the PIIGS economies will leave the Euro system. In the meantime, the Euro will act as an unbearable deflationary weight upon the weaker Euro economies. Any can kicking at this time won’t buy more than a few months reprieve in the Greek stock market until the next wave down begins.

Gold is money. It has been money for thousands of years. I’ll take that track record over any of the existing fiat currencies currently in use. In fact, I’ll take physical Gold over any asset class until the Dow to Gold ratio hits 2, and we may well go below 1 this cycle. Shiny metal or the filthy paper promises of those whom history has shown cannot be trusted when the storm clouds finally start to release their cleansing rain.

NOTE: I recommend physical Gold held outside the banking system as a significant part of any serious investor’s portfolio. At this stage of the secular bear market in traditional asset classes, I don’t see even a 100% allocation to physical precious metals as unreasonable for those seeking to preserve wealth. For those who also seek speculative returns, I run a low-cost subscription service with specific trading recommendations and more in-depth analysis on markets with a focus on the precious metals sector.

Misery index vs Sp500 and Gold