Gold broke out of a classic cup and handle pattern yesterday right before the Bank of Japan announcement.  The Yen has significantly strengthened since June as this is extremely difficult for the Japanese export companies.  The economy in Japan is weakening and they are facing their own sovereign debt issues which have not yet surfaced.  However, what is more important is how the markets are reacting.  This reaction in the yen may be short lived.  Although it might be a short term bandaid the intervention efforts may be too little for the global forces of supply and demand.  There is little support for the dollar as evidenced by the U.S. Dollar Chart. 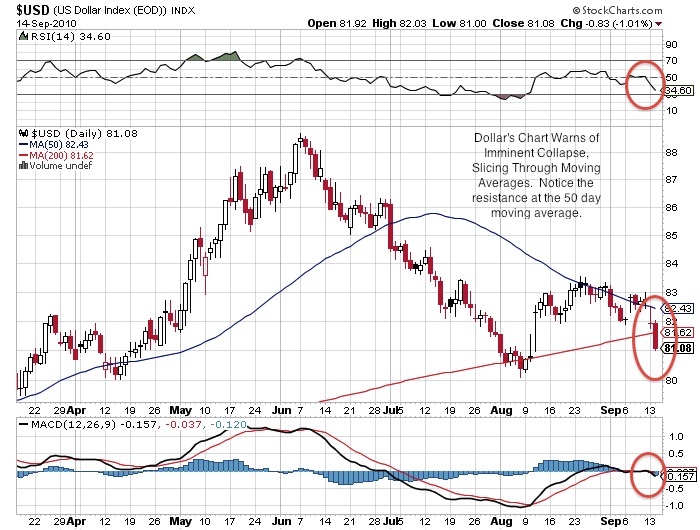 Today the selling in the yen did not transfer to purchasing U.S. Dollars.  It seems as though yesterday and the past several weeks there has been a major rush into precious metals.  The dollar’s chart is giving warning signs of an imminent collapse. Certainly the dollar has not reacted positively to this announcement.

The dollar is slicing through its 200 day moving average and the 50 day clearly has acted as resistance.  A major transfer of dollars into precious metals are occurring.  A death cross is imminent on the dollar and this is occurring simultaneously to a new high breakouts on silver and gold.

Usually a weak dollar has been bullish for stock markets as investors were less risk averse.  However, this is not the case this time.  Even though the dollar has fallen since June the markets have failed to rally significantly.  Instead precious metals and mining companies have broken out of key resistance. 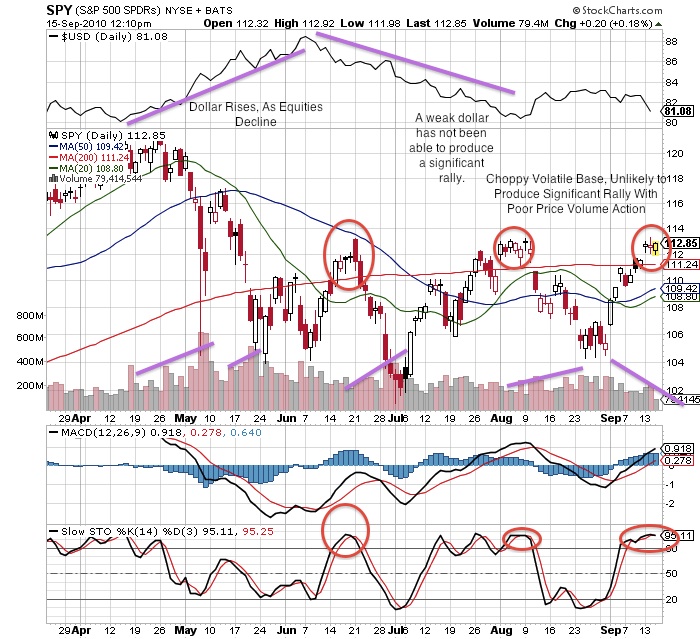 The S&P 500 has been in a sloppy and volatile base for four and half months.  The poor price volume action tells me a breakout above $114 is highly unlikely.  A third failure may be imminent as overbought conditions are combining with previous resistance.

This cup and handle pattern in gold is extremely bullish and could be the beginning of a next leg higher.  It is a sign of a major consolidation and this recent breakout may bring in more investment interest by institutions who are concerned about currency and sovereign debt issues.  A major transfer of capital is moving from currencies, bonds and equities into precious metals.

To see my recent prediction of this breakout move click here.

Gold’s (GLD) pattern is very rare and this setup tends to indicate a major move into hard assets.

If we see a decoupling of the dollar versus gold continuing, expect to see more buyouts of resource companies from Asia.  Right now we are seeing a massive transition of wealth from the dollar to silver and gold.

Do Huge Volumes for Gold Indicate More Upside or Is Caution Needed?