We are in an economic depression in the United States. True to form, despite being in a well-established secular private credit contraction (i.e. economic depression), the “powers that be” are now insistent on using the “great recession” euphemism and declaring that it is essentially over. Such misguided “faith” and outright lying serves the few at the expense of the many.

But I would bet that even many of the people who saw it coming are likely shocked at the speed and depth with which the economic deterioration has progressed. A few random statistics and graphs regarding the state of the U.S. economy:

*In the Miami metro area, 28.8% of mortgages are currently at least 90 days overdue (i.e. in default). This leads the nation right now. *And finally, a chart that makes me confident that holding Gold makes more sense as a cash equivalent than holding U.S. Dollars – the St. Louis Adjusted Monetary Base: 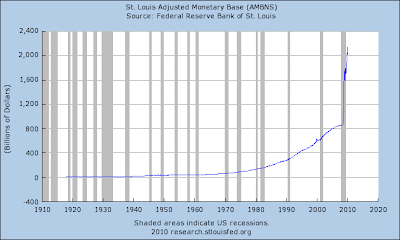 Gold is a time-proven wealth preserving asset in periods of economic depression. Government-sponsored cash is also a time-proven wealth preserving asset in such periods as long as your timing is right. In other words, as long as you get rid of the government cash and trade it for something else before the inevitable currency devaluation hits. Me, I’ll stick with Gold. It’s been a better play than the U.S. Dollar so far and I don’t see that changing any time soon.

John Kaiser: PDAC-Too Much of a Good Thing?