In recent weeks we’ve written about the decoupling or negative correlation between the equity market and mining equities. As the miners take a hard turn lower and the S&P 500 continues higher, this current trend is all the more obvious. At the same time, commodity prices have been in a cyclical bear and have struggled to gain traction. Our forecast for 2013 is for these cyclical trends to shift. It won’t happen instantly but it will slowly evolve in the coming months and quarters. Today, we see that the equity market is ever more closer to that cyclical top, miners are about to retest a major bottom and hard assets have a new catalyst.

First let us take a look at the miners. From top to bottom we plot GDX, GDXJ (larger juniors) and SIL (silver miners). It doesn’t take a technician to see where these markets are headed in the coming days. GDX will test $40, GDXJ will test $17 and SIL will test $19.50 and perhaps $17. 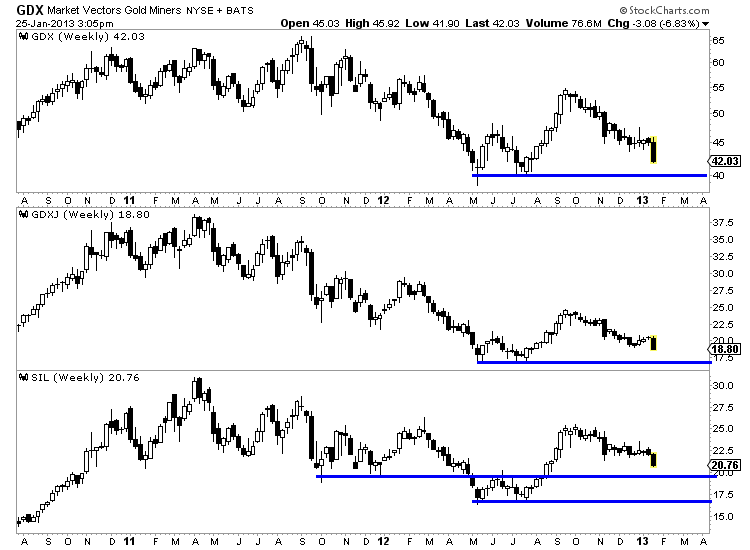 As we penn this, the S&P 500 is trading at 1501 and faces very strong 13-year resistance at 1550 as well as the all-time high at 1576. Look at the chart below. Does this look like a market you want to buy? How in the world will the market break past 13-year resistance, much less even sustain a breakout move after a four-year rally? 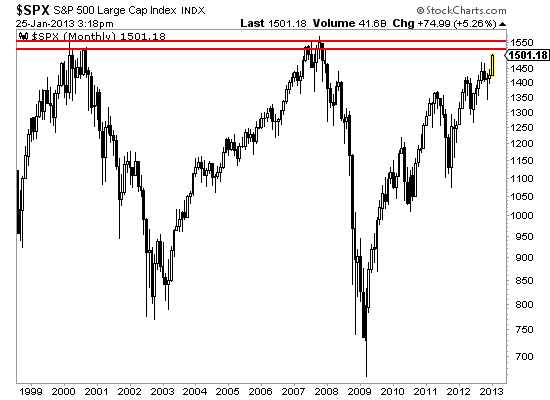 Nevertheless, the typical Wall Street cheerleaders, I mean strategists are predicting the usual 10-15% advance and are justifying that with the belief that the economy will strengthen and valuations will pick up. I guess they forgot that margins are at record highs and therefore corporate earnings have likely peaked. At the same time, the typical trader has hopped on board the trend yet can’t rationalize his long position beyond the idea that “it’s going up.” I guess they forgot about the ominous economic headwinds, stagnant earnings and the blatantly obvious massive resistance at 1550.

Beyond the technicals, one should see that sentiment is arguing for caution. Below is the NAAIM survey of manager sentiment. This data results from money in the market and not opinion. At 86, the NAAIM survey is only points away from a five-year high.

Next, we show the amount of Rydex assets in their money market fund relative to all of their funds. The current figure is dangerously close to the excessive optimism line.

In other news, the latest survey from the American Association of Individual Investors showed bullish sentiment at a two-year high. It made its largest weekly jump in the past 19 months. Also, Sober Look reports that the Vix is now at post-recession lows and junk bonds are at all time highs.

Meanwhile, commodities (which includes precious metals) have been in a cyclical bear market for 23 months! The CCI may have bottomed last June but we won’t know for certain for a while. Tiho Brkan’s chart shows the CCI and the weighting of asset managers surveyed in the Merrill Lynch fund manager’s survey. At present, we see that a net 2% of managers are underweight commodities. Compare that to 2009-2011 when 30% of managers were routinely overweight the sector. 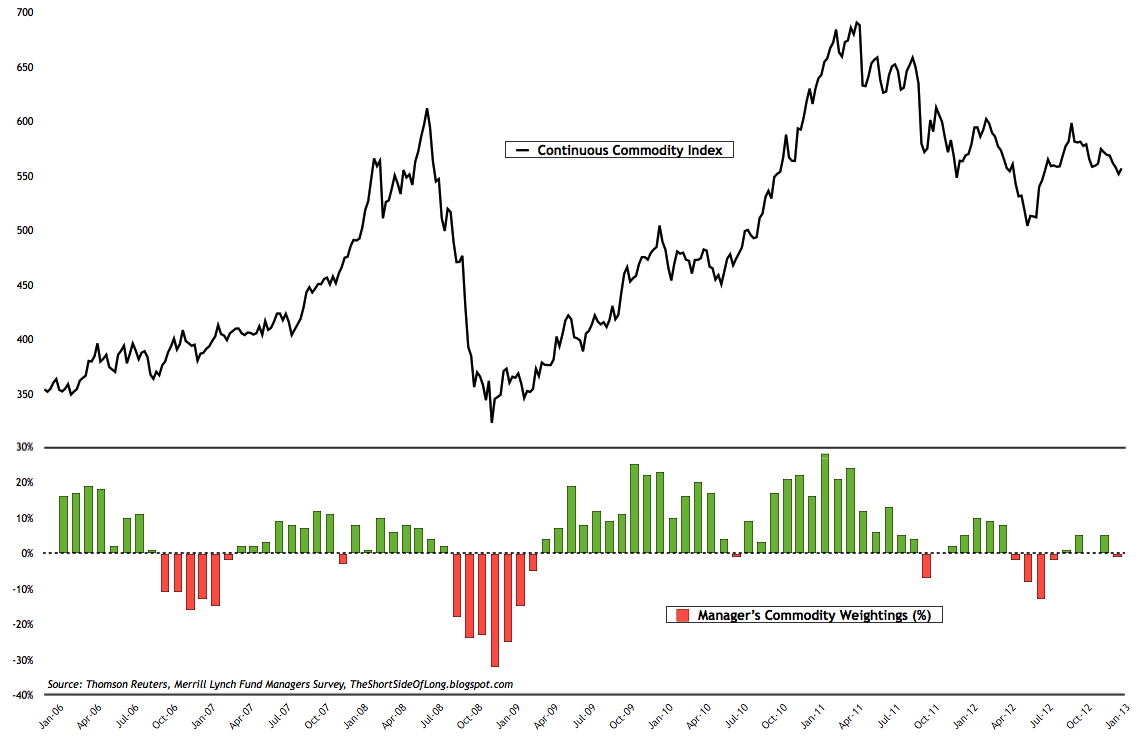 On the fundamental side, note that after a nearly two-year consolidation, the adjusted monetary base has broken out to a new all-time high. Hat tip to Biiwii The Adjusted Monetary Base is the sum of currency in circulation outside Federal Reserve Banks and the U.S. Treasury, plus deposits held by depository institutions at Federal Reserve Banks. 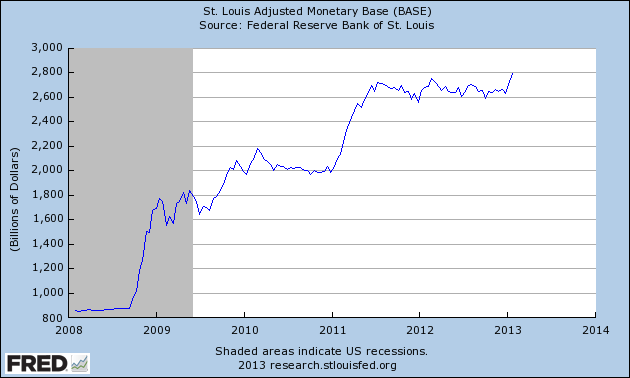 Let’s sum up the facts. The equity market and mining equities have been in a strong decoupling for 17 months. The mining equities are going to retest their 50% retracement and major support amid record low valuations and terrible sentiment. The equity market is going to test its all-time high and 13 years of major resistance amid bullish sentiment which could reach extremes after more gains. Meanwhile, commodities have been in a cyclical bear market for nearly two years and the average fund manager is very slightly underweight the sector. Finally, after consolidating for two years, the monetary base is breaking out to new highs. Surely this is all a sign of a major new bull market in stocks!

The bottom line is recent cyclical trends appear to be in the 9th inning. Equities are very close to an important top while mining equities could form a major double bottom (on monthly and long-term charts). Meanwhile, the cyclical bear market in commodities is just about over. Are we saying these trend changes will happen instantly? Of course not. Cyclical changes take months and perhaps quarters to complete. The key is to ignore the day to day noise and focus on long-term charts. We’ve been patient with the miners and have held an ample cash position ready to put to work. We plan to do so next week as the major lows are tested. If you’d be interested in professional guidance in uncovering the producers and explorers poised for big gains then we invite you to learn more about our service. Tiho Brkan: What is Coming on the other side of this consolidation is Magnificent Returns and Magnificent Gains

Production Commences at the Del Toro Silver Mine