A couple of weeks ago I mentioned the the dollar was on the verge of a collapse. The dollar has significantly fallen since that time and is now reaching extremely oversold levels evidenced by the stochastics and RSI. So a dead-cat bounce may be beginning in the dollar, which may put short-term pressure on equities and miners.

Could we be on the verge of the next deflationary crisis? Ben Bernanke said he’s still concerned about deflation. The financial system is still under pressure with high unemployment, foreclosures, and defaulting credit. There will be further sovereign debt issues from Europe and further weakening in real estate as defaults continue to rise. This tug of war between deflation versus inflation seems to be an ongoing cycle and we may have further news out of Europe surface soon. 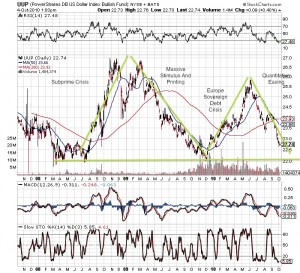 You can observe the chart of the dollar the cycles of deflationary periods versus inflationary periods. The dollar is reaching extremely oversold levels and a price floor, which means we may see a dead-cat bounce. This may put pressure on gold and silver temporarily. It will provide further market entry points for precious metal investors who enter the trend when gold and silver is on sale and oversold, reaching long-term trend support.

There may be further dissent from central bankers to complete a new round of asset purchases unless we see further debt issues from Europe. Many are concerned about the deteriorating dollar and the rise in gold and silver. This indicates investors are concerned about the stability of the US currency. This lack of confidence in a sustainable recovery will put into question the past monetary easing of the Fed. The quantitative easing isn’t making a sustainable recovery and producing any real economic growth. Although the equity markets have recovered, it’s been a direct result of the dollar collapse. The housing market isn’t showing signs of any improvement from the record low interest rates and still hasn’t been able to penetrate its 200-day moving average.The unemployment rate is still high and the devalued dollar is putting further pressure on wage earners.

The falling dollar also has hurt emerging markets that rely on a favorable exchange rate in order to export goods. Recently the Bank of Japan had to intervene to push the yen lower. However that was short-lived as the market shrugged off that news item and reversed higher. Although the Fed’s monetary policies may be good for the equity markets, they’re not making a significant impact on the average American. The rapid decline in the dollar will spark further pressure on emerging economies especially in Asia. This decline in the dollar will increase merger and acquisitions in the natural-resource sector as many Asian nations who are becoming net importers of certain commodities are trying to increase their supply. Although the downtrend in the dollar is confirmed a short-term bounce from these oversold levels may occur, which may provide further buying opportunities in gold and silver. 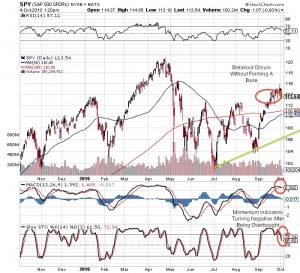 The S&P 500 is appearing to show signs that the rally is losing steam. The MACD is making a bearish crossover and the significant rise without any pullbacks shows an extremely volatile move that could see a nasty pullback. The breakout of $114 — which I didn’t expect to occur — seems to be a fake breakout. The breakout occurred without forming any real base. Thursday appeared to be an outside bar day, indicating that the uptrend of September is losing strength. The price volume action is bearish and now the MACD has made a bearish crossover. Stochastic indicators have also signaled a sell signal from extremely overbought levels. Caution needs to be exercised.

Although gold and silver may be under pressure from a weak equity market and dollar dead cat bounce, I believe it will provide another opportunity for precious metal investors to enter the trade at a more reasonable level.