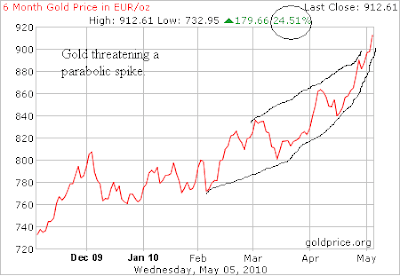 Meanwhile, the European stock markets (using the Dow Jones Europe Index [$E1DOW] as a proxy), have fallen and acted as a terrible currency hedge over the past 6 months: 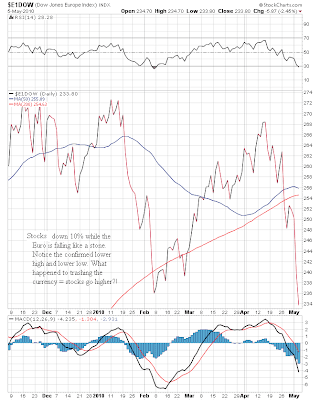 The Euro Index is down about 14% over this 6 month time period. Of course, the Euro Index defines the value of a paper-debt ticket by pricing it in other paper-debt tickets. Since all paper is sinking relative to Gold, the actual currency decline is likely greater than 14%. Euro Cash-4-Gold anyone? If I was a currency trader (I’m not – I only deal with the US Dollars I am paid in and the Gold I buy with my Dollars), I would be starting to buy the Euro here as a trade. Articles like this show just how long in the tooth the Euro decline has gotten.

As the rolling panicky declines in different currencies progresses, just as it did in the 1930s the last time the international monetary system broke down, look for Gold to become the go to currency. The US Dollar may well be the last to fall, but Gold will continue to rise in US Dollar terms. Gold has risen every year over the past 10 years and this year will be no different.

I suspect a short-term bounce higher in the stock markets is due and I closed my commercial real estate short position today for some quick profits. I plan to re-enter this trade soon as I remain bearish on equities. Let’s see how Gold stocks perform when the bounce comes, as they should outperform general equities on a bounce higher, whether it begins tomorrow or later in the week. GDXJ had a nice strong finish today and ended in the black after a panicky spike lower early in the day. The Gold to commodities ratio has been surging higher, setting up the fundamentals for a price spike higher in the Gold miners. Gold stocks continue to underperform relative to the risk they entail, but they have been known to turn on a dime.

Richard Russell: Why I’m in Cash and Gold – What About You?

Gold Will Emerge as the Only Safe Haven