In my articles you’ve heard me talk about accumulating on weakness, buying support, being patient and waiting for better opportunities. Folks, this next week is one of those opportunities. The mining stocks have been a disaster if you’ve invested in the average fund, GDX or GDXJ. If you’ve invested in the wrong stocks, they’ve been a total disaster and you now hate the sector forever. We’ve certainly been surprised by this protracted struggle. However, the gold shares are set to test a major bottom and could be on the cusp of a major reversal which could begin as soon as next week.

The gold stocks are setting up similarly to the bottom in 2005. Let me explain. The gold stocks made a major double bottom in 2004 and 2005. The first bottom occurred in 2004 and the second in 2005. Interestingly, the 2004 bottom was its own double bottom. Following that the gold stocks rallied significantly for several months before eventually giving it all back. Note the circles on the chart as they compare to the current situation. Below is a chart of the HUI in 2004-2005 with the HUI/Gold ratio plotted at the bottom. 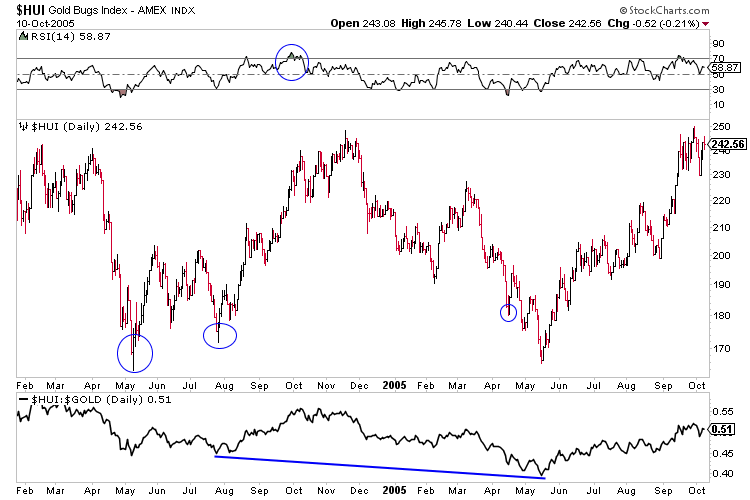 In 2012 the HUI formed a small double bottom and then rallied strongly for a few months (like in 2004). Similar to 2005, the market has given all of that back and in the process the HUI/Gold ratio broke to a new low. The question now is will the HUI form a major rebound similar to the one in May 2005 and cement a long-term double bottom? Correlation is not causation but we should be aware of the potential for a strong rebound. 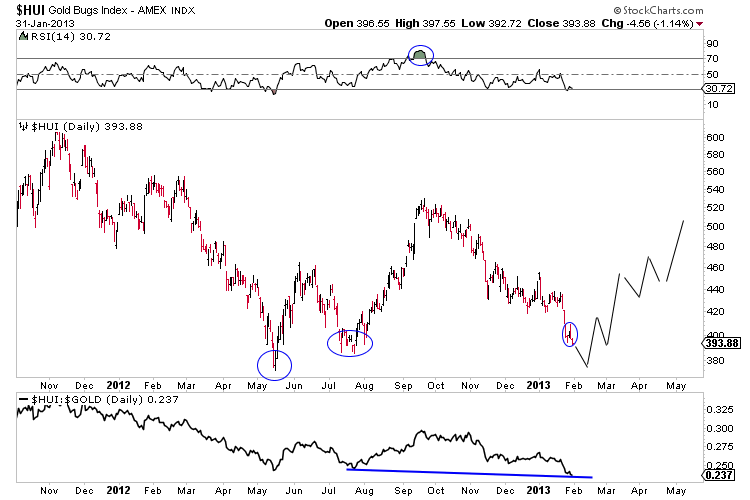 Aside from the 2012 double bottom support, there is major trendline support around the 350 area. In the short-term, a move below the May 2012 low would constitute a major breakdown. However, it could be a test of the bull trendline and induce a bear trap and major reversal. On a very long-term chart, the difference between 375 and 350 is barely noticeable. The chart below shows the trendline connecting the 2000 and 2008 lows.

One should buy when the sector becomes extremely oversold on a very short-term basis. Look for a bad day followed by a gap down the next day which produces big losses intraday. This is the type of action that precedes bottoms in the mining stocks. Traders can buy GDXJ or NUGT for leverage. For stock pickers, look for stocks with strong fundamentals which have held up well in recent days and weeks. Those stocks will produce good rebounds. If you’d be interested in professional guidance in uncovering the producers and explorers poised for big gains then we invite you to learn more about our service.