Topics Covered
Overview
Today’s post specifically focuses on BofA Merrill Lynch Fund Managers Survey. it is one of the best contrarian indicators I know within the market space, as Merrill Lynch surveys about two to three hundred funds every month to get a consensus outlook. This month, the survey period was from 4th to 10th May, with an overall total of 234 fund managers survey representing $669bn AUM. Out of the overall total, 78 are Institutional Funds, 24 are hedge Funds, 47 are Retail Funds and 24 were other. More than 20% of all funds manage over 1 billion dollars. Fund managers are asked to focus on global growth, inflation, profits expectations, asset class and sector weighting positions, plus variety of other questions regarding risk and exposure. Enjoy.
Economic Data 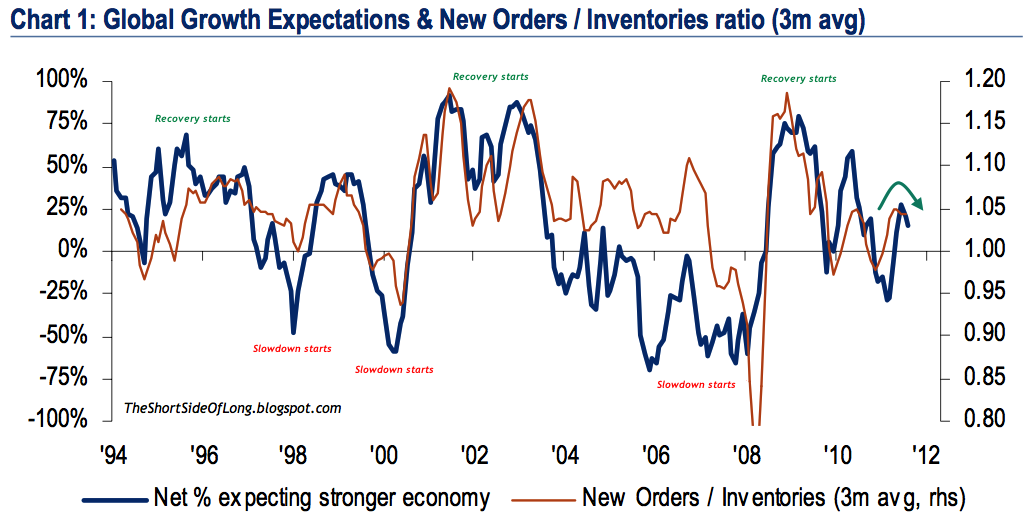 The survey reported that “global growth expectations continued to drop, with a net 15% of fund managers expecting the global economy to strengthen over the next 12 months. This is down from its recent peak in March 2012, but is still well above levels associated with recession.” The chart above, which I edited, shows that majority of the time economic slowdowns or recessions intensify with below net 50% of managers expecting weak growth ahead. Currently we aren’t even close to those readings yet, but since this is not an normal economic cycle based on strong fundamental growth (like 03 – 07), an external surprise shock out of Eurozone could easily derail growth in an instant.

The survey also reported that, against trend seen in global expectations, net percentage of managers thinking that the Chinese growth will improve rose to an 18-month high reading of above 10%. Major Chinese growth recoveries occur when we see close to net 50% of managers expecting the growth to improve and unfortunately we aren’t even close yet. 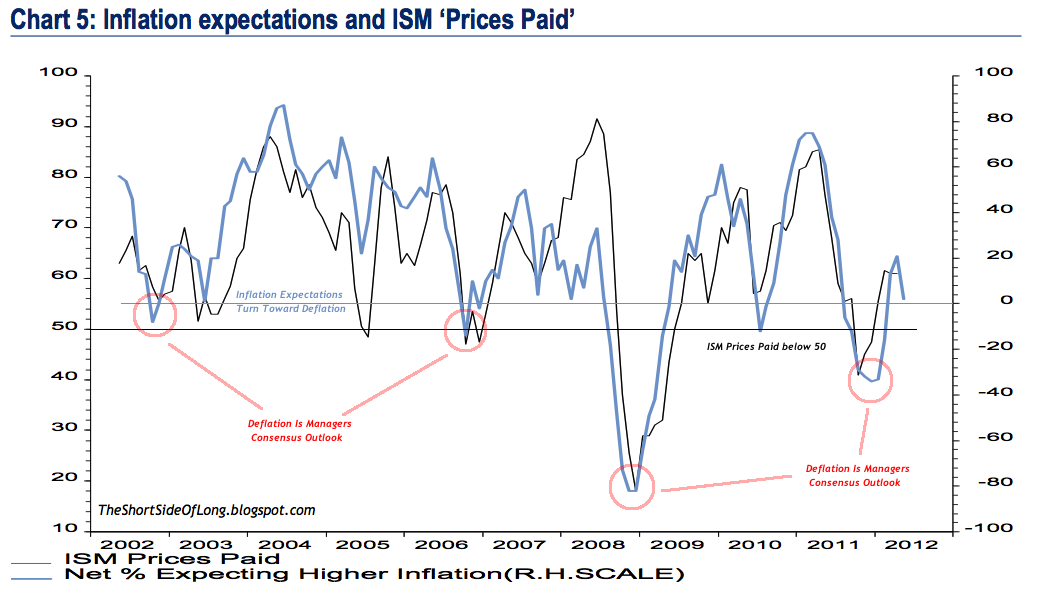 Moving forward, interestingly the sharp drop in growth expectations also showed a sharp drop in inflation expectations too. The report went onto say that “a net 2% expect inflation to rise in 12 months, down from 21% last month. This paves the way for policy easing.” Merrill Lynch went onto to summarise the growth outlook by stating the following:

“After peaking in March, global growth expectations are down for a second month and only 9% see above-trend growth over the next 12 months. But no recession is forecast, and China growth optimism rose to an 18-month high. Inflation expectations dropped sharply and hopes of policy easing continue to rise modestly: 56% now expect Fed QE3 and 65% expect further QE by the ECB.” Fund managers continued to raise cash in May. Managers weightings towards cash allocations jumped higher this month towards a net 28% overweight, which is up from a net 24% overweight last month. We are now once again reach close to one standard deviation highs, which means fund managers remain fearful.Average cash balances remained the same to previous month at 4.7%. From a  contrarian point of view, reading above 5.0% should be considered as a major buy signal. In 2008 the cash balance reading peaked at 5.5% in December. In 2011 the cash balance reading peaked at 5.2% in August. Both proved to be close to a major bottom in all risk assets, including equities.

While the chart doesn’t show exposure to global equities, the survey went onto show that is has modestly been reduced. Merrill Lynch stated that “equity allocations declined to a net 16% overweight from 26% overweight last month as investors took risk off the table. The current allocation to equities falls roughly in the middle of the range relative to history.” So in other words, equity managers are not yet in panic mode, but do keep in mind that the survey was done between 4th and 10th of May, which means as selling intensified, managers could have cut their weightings further. 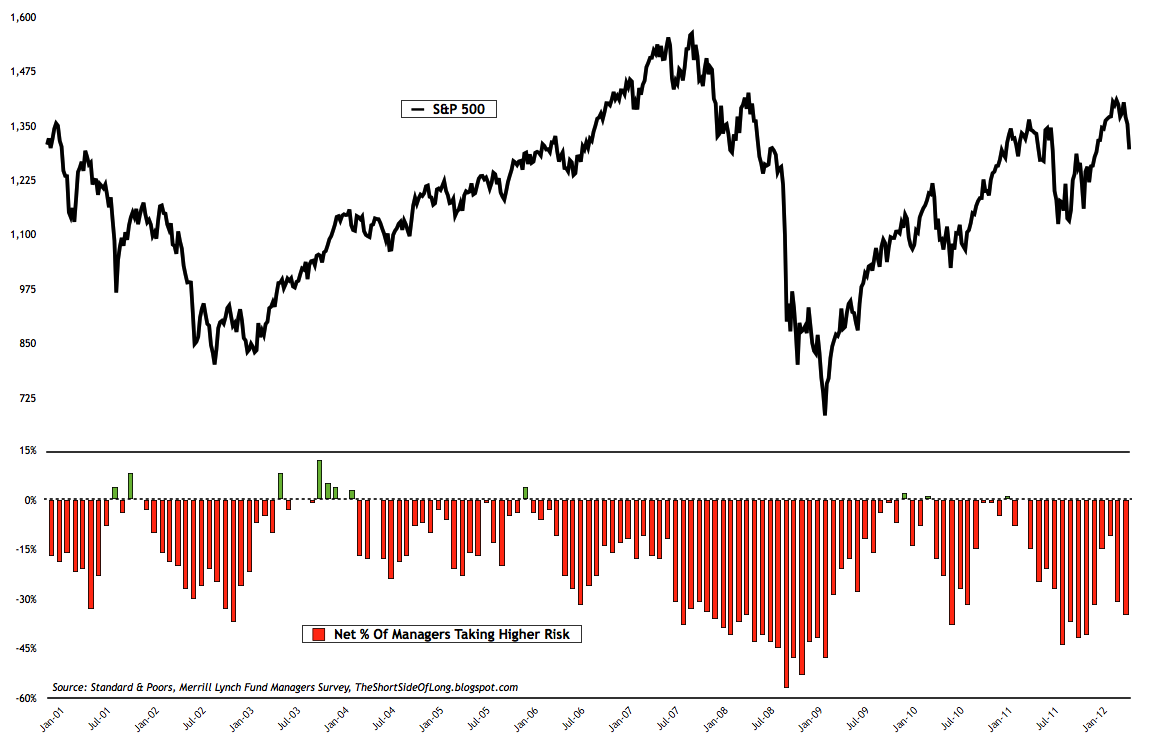 The survey shows that overall risk appetite among fund managers continues to decline for the second month in the row. A net % of fund managers taking higher than normal risk dropped to -35%, down from -21% last month. In the chart above, readings at -40% or below tend to signal extreme readings. Investor perceptions of liquidity conditions are also declining, with a net 23% of managers viewing current conditions as positive, down from 36% of managers last month. 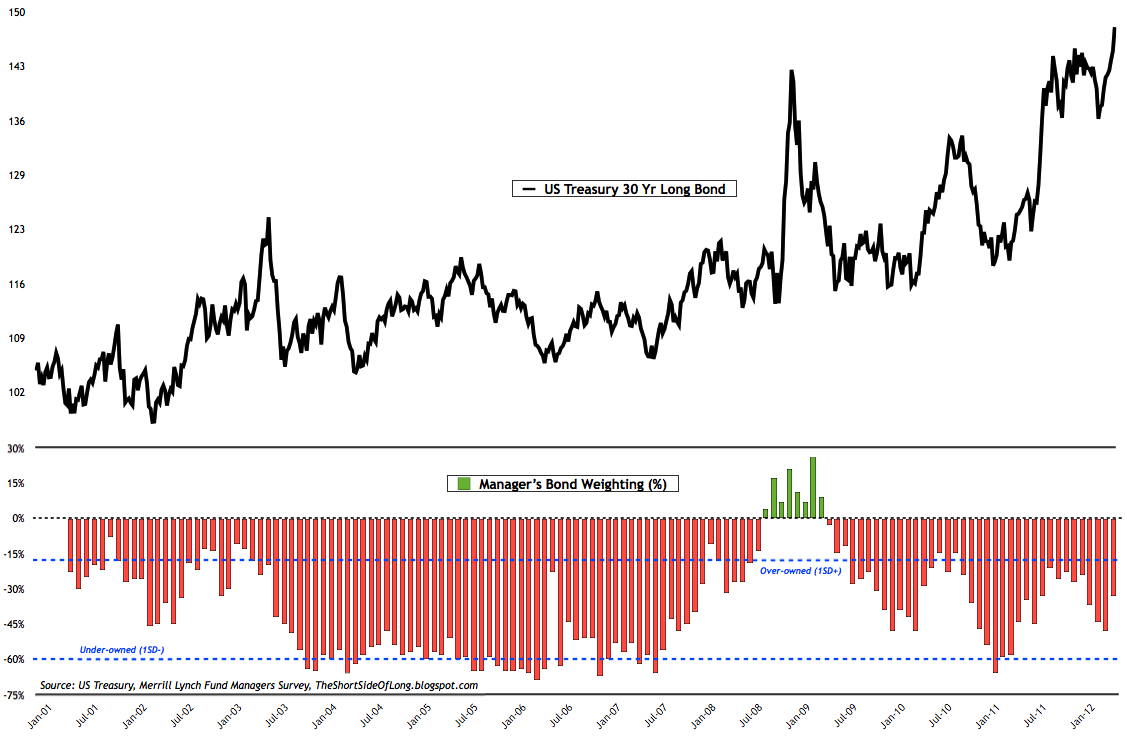 Merrill Lynch survey also showed that cash is not the only popular safe haven investment right now. Bond allocations also rose in May, as risk appetite waned. A net 33% of fund managers are now underweight bonds, which is down from a net 48% of fund managers only a month ago. Despite a powerful rally in the Bond market, majority of fund managers still seem to be only modestly exposed to this asset class, even with ongoing Eurozone worries. 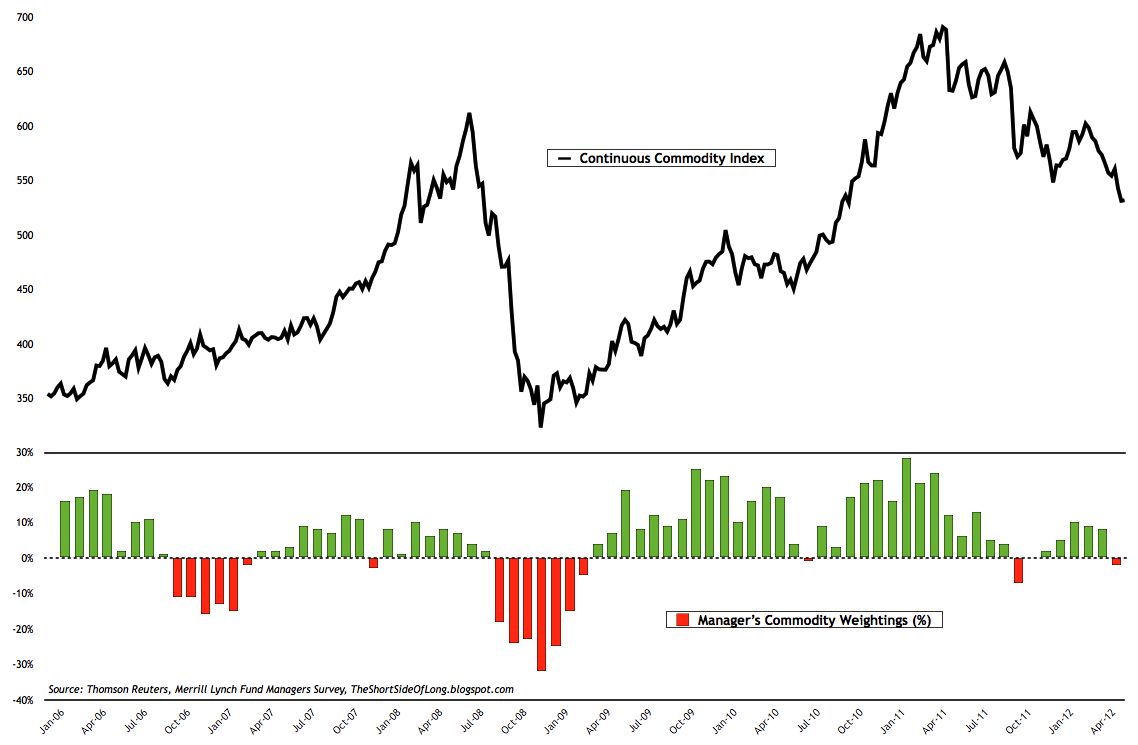 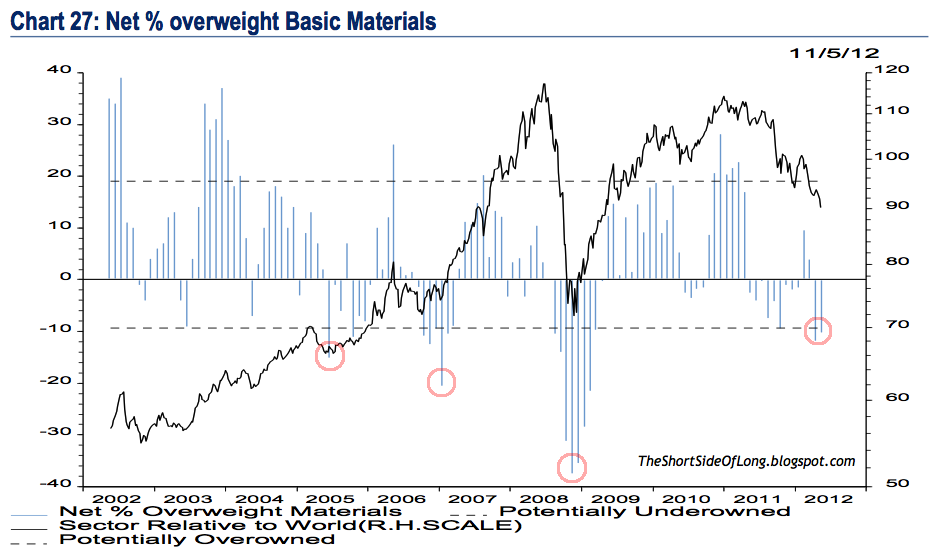 Relative to the survey’s history, which spans for over a decade, global fund managers are very underweight the Materials Sector, with mining companies being out of favour. The survey went onto report that “the current allocation to resources is low at net 10% of fund managers being underweight this sector.” This signal is now very similar to last months, but has yet to produce a buy signal. Also to point out is that majority of mining companies drifted lower since the survey was down, so there is a chance managers have reduced weightings here even further.

The Short Side of Long Blog