Over the past few weeks Gold has traded at or near record highs. It has yet to embark on a sustained breakout but that is not because Gold is a crowded trade. In recent months money has moved into equities, Oil and Silver. As a result, some hot money and speculative money has moved out of Gold, leaving the market in a healthier state. 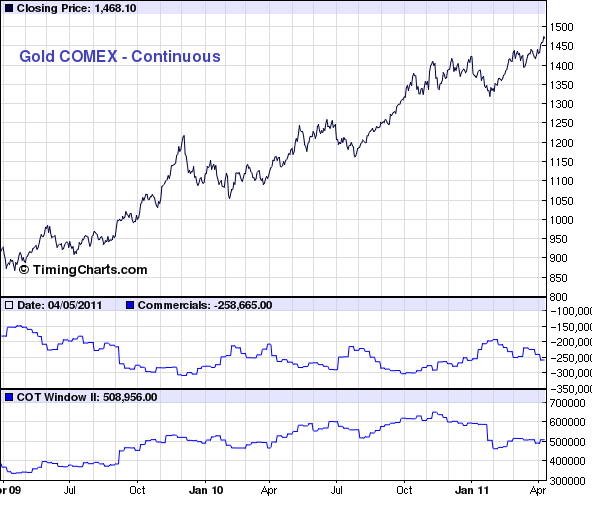 Sentimentrader.com’s public opinion gauge shows 69% bulls. Interestingly, since late 2008, public opinion has remained in a range from 60% to 73% bulls. Note that major peaks in 2006 and 2008 came near 85% bulls. If and when public opinion exceeds 75% bulls, then we’ll have an indication that some speculation is coming into the market.

Sentiment by itself is not a timing tool unless it shows major extremes in either direction. Looking at sentiment data helps us decipher the near-term potential of a market. This data for Gold tells us that the market is in a healthy position. Speculation in the futures market and speculation by the public are at reasonable if not even lower levels. This tells us that the market is in a position to rise in the near term (with an increase in speculation) and that the potential downside is somewhat limited.

Looking for more analysis? Consider our professional guidance and analysis by taking a free 14-day trial to our service.

Why Gold Stocks are Struggling Despite Record Gold Price