Statistically speaking, gold stocks remain strongly correlated with gold. All markets breathe (ebb and flow). Unfortunately, emotions often distort perceptions. Investors’ reactions to short-term ebbs (under performance) can distort the reality of long-term flows (out performance). The HUI, excluding dividends (a big exclusion), has risen from 73.77 to 497 since 2001. Gold, however, has risen from 282 to 1540 over a similar period. The gold shares, while largely ebbing since 2004, continue to out perform. 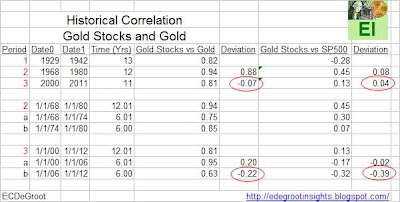 Most investors will be left wondering what could have been when ebb inevitably turns to flow as the cycle matures.

Jesse’s Café Americain expresses one theory: “It looks to me that there is a paired trade going on, of long bullion and short miners. … If the stock market falls apart, the miners are much more vulnerable to a sell-off than bullion. That is the reason for the paired trade I believe.”

“Trader Dan” Norcini suggests a contributory factor: “The gold and silver ETFs are also partly to blame, in that these Trojan Horses have siphoned off a huge amount of speculative money flows that otherwise would have found its way into the mining-sector shares.”

Norcini is inclined to see malign motives behind the selling pressure.

Given its high-altitude perspective, the Aden Report felt able to offer some comfort on Friday evening: “XAU fell to a new low for the year yesterday, and it’s weak below 196. Gold shares are oversold, however, and the downside looks limited.”

In a long, thoughtful discussion posted at Commodities-Now, gold-fund manager Frank Holmes notes: “Senior gold miners have seen the strongest gains, with average per-share earnings increasing roughly 67% since 2009. … The average senior gold miner now has more than twice the amount of cash flow; mid-sized intermediate gold companies’ cash flow has more than tripled. … One can purchase shares of gold mining companies at their second-cheapest level in nearly 30 years. The extreme was in 2008 during the depths of the financial crisis; many share values quadrupled off of those levels.”

Is Gold Flying Under the Radar?