The action in the precious metals raises speculations of interest to Gold Stock Trades subscribers especially in the labyrinth created by a fear driven market.  Gold at this time is participating in a runaway move past resistance.  Although gold has reached new record highs it may be stalling in its attempt to continue moving parabolic, while the undervalued miners play catch up.  What may this hesitation signal and shrinking of the divergence between miners and bullion mean to my readers?
Technically, it may be informing us that the bull move so many analysts are expecting is somewhat mature in gold bullion but miners are just beginning to breakout.  Much like a sprinter who first moves backwards in his running block in order to propel his thrust forward, gold may initially have to come down from its technical heights in order to amass the energy required for a more pronounced forward move.  The bull headed minotaur of bullion may have to take a time out to rest, while the miners such as Goldcorp(GG), Newmont(NEM) and Barrick(ABX) play catch up as they look poised to break out of the running blocks. 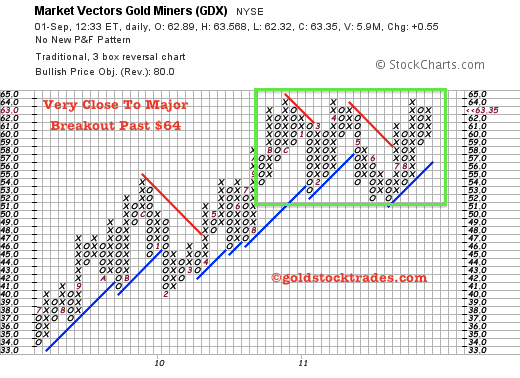 Its been a long run for the beast since our late January 2011 Buy Signal.  Make no mistake Minos will rise refreshed to make another run to higher highs.  A brief retreat for gold bullion to long term trend support would be of no surprise.  Indeed, it may represent a healthy and necessary correction in what we view as the ongoing highway of the long secular rise.  These thoughts should not be regarded as bearish analysis at all.  Instead they are being presented as a technical and healthy possibility to eliminate current media hyped precious metals euphoria and avoid buying gold bullion at an interim top.  Instead we suggest looking into the undervalued miners just beginning a potential major move.
Gold Stock Trades must include any and all eventualities.  How pleasant it would be if the ultimate path to riches was one straight move higher.  Investing does not work like that.  Markets are fickle and they do everything they can to confuse, misdirect and obfuscate the speculator.  Precious metals investors must follow bullion and the mining equities as everything has its season.  It appears to be the miners time under the sun.
US Treasuries (TLT) have reached record highs reflecting the irrational fear of U.S. debt as a safe haven.  Gold (GLD) markets are ebullient as the media scares us with the bugaboos of horrific possibilities that may never come to pass.  Your attention is also called to the falling U.S. dollar (UUP), which appears to be on the verge of breaking into record lows.  It remains to be seen whether the panic in the greenback is just around the corner, as investors fear what impact QE3 will have on the currency.  One might have expected the U.S. dollar to be an iron clad safe haven during the market decline in August but it was not.
Such negative action may mirror inflationary decisions regardless of whatever compromises reached.  There is a sense that inflation is in the offing and that now only a bandaid will be applied to staunch the bleeding of an economy in trouble.
In the background, is the ever present figure of The Fed which is taking whatever steps necessary to prime the pump to give us de facto quantitative easing in whatever guise is necessary to feed the Minotaur.  For the present, a compromise may materialize, sufficient to take us to the next election in 2012, when the whole song and dance will be reprised in a repetitious third act.
Preparations are being made for further downgrades of the U.S. AAA credit rating, which may affect the security of treasuries (TLT) as a safe haven.  As speculators are entrapped by the fear of bad news there may be a rush to the safe havens of gold(GDX) and silver(SIL) miners, possibly uranium(URA) and rare earth(REMX) miners as well.  Such developments may be leaving these sectors as the only players left standing on the field.   Stay tuned to my daily bulletin to keep track of these exciting sectors.
Disclosure: Long GLD,SLV,GDX

Investors Are Returning To The Undervalued Mining Stocks